Why An Emotionally Strong Woman Gets the Relationship She Wants 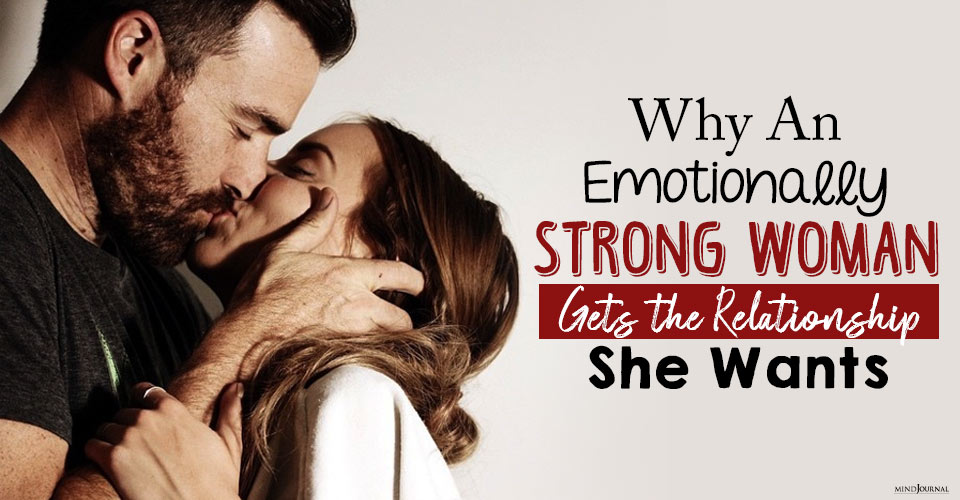 An emotionally strong woman will make sure that she values herself in a relationship. That she is willing to love but also to be loved. She does things for her person but allows things to be done for her too. She knows that she deserves to be loved and respected and she won’t settle for anything less.

If yes, take a step back and start asking for what you need. If your partner isn’t willing to try to give it to you, walk away.

An emotionally strong woman would do just that!

4. She has control of her emotions.

Are you one of those people who gets angered easily? Does it take no more than a few eye-rolls to trigger you to yell and scream?

Are you someone who cries at the drop of the hat? Someone who no one can talk to because you are so sensitive and fragile?

Are you someone who gets up and walks away when something isn’t going the way you want it to?

Pay attention to your emotions. Having control of them will help you get the life and the love that you want.

Read: Every Strong Woman Was Once A Weak Girl Who Promised Herself ‘Never Again’

5. She doesn’t waste any time.

‘Life is short’ is the motto of any emotionally strong woman.

No excuses about how she isn’t a quitter or how if she just loves him enough he will change. She recognizes when done is done and moves on.

And that is why an emotionally strong woman gets what she wants in a relationship every time. Because she knows that the longer she sticks around, the less likely it is that she will find the love that she wants and deserves.

So now you understand why an emotionally strong woman gets what she wants in a relationship every time.

She knows exactly what she wants and isn’t afraid to ask for it.
She values herself,
she controls her emotions and
she doesn’t waste any time.

I hope this article has been inspirational for you, that you have seen that getting the life that you want is possible – you just need to find that strong inner you!

She is in there! I promise!

A mentally and emotionally strong woman isn’t simply born, they are forced through the challenges of life and relationships. Emotions are something that we cannot escape, we all are bound to have some emotions.

But to give in to those emotions or to overcome those emotions is our choice and that’s what makes the difference. For a long time, women are considered emotional but these emotions drive them, to be strong, to be themselves.