An Educated Empath Is a Sociopath’s Worst Nightmare 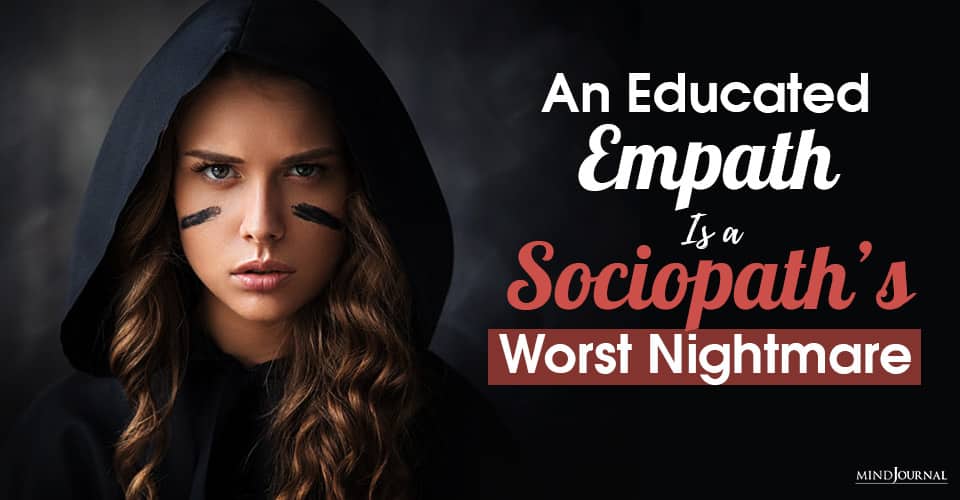 It’s a very common and inaccurate misconception that narcissists and sociopaths are smarter and way more intelligent than empaths. On the contrary, it’s the empaths who are intellectually way superior to them. And this is exactly what makes them a sociopath’s worst nightmare.

It is simply because empaths are innovative, creative, have an abstract way of thinking, and most importantly are always grounded in reality. Unsurprisingly, sociopaths and narcissists lack all these qualities and little do they know that empaths have the smarts and intellect to manipulate them more than they could ever fathom.

It’s just that empaths would never do that, because they are not built that way, and they know that just because they can, doesn’t mean they should.

Empaths never try to exploit or control sociopaths, because they have strong values, morals, and ethics. Most importantly, they don’t believe in hurting other people for fun, or because they don’t feel good about themselves on the inside.

Related: Why Empathic People Are Natural Targets For Sociopaths

Expecting an empath to behave like their abuser is not the right approach, but it is important for them to protect themselves by using their creativity and thinking of non-toxic and non-violent tricks to counter a sociopath. Empaths should come up with plans that will force a sociopath to stay miles away from them.

Trying to stay away from toxic and manipulative people shouldn’t cause any kind of guilt, rather it’s a form of healthy behavior, also known as self-care.

If you have ever been a target, or if you still are, then always remember that you are way more intelligent than the sociopath, because you know what the reality is. And that is a BIG advantage for you, so use it wisely. Honestly, anyone who tries to play smart with an enlightened empath is an absolute fool!

Want to know more about why an educated empath is a sociopath’s worst nightmare? Check this video out below!