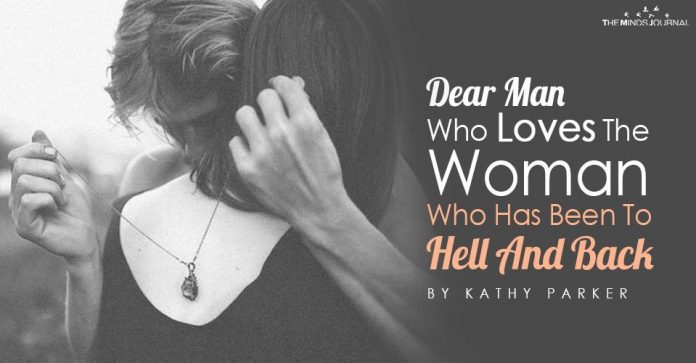 Dear Man Who Loves The Woman Who Has Been To Hell and Back,

Last year I published the article, How To Love A Woman Who Has Been To Hell and Back.

This article has since been republished on more websites than I could even tell you.

It has been shared hundreds of thousands of times all around the world, and has received millions of views. I can’t tell you how many hundreds of messages I’ve received from women who have thanked me for giving them the words they could never say.

But in the last while, my inbox has also been filled with messages from men such as you.

Men who are trying to love the woman who has been to hell and back, but are struggling.

Men who are doing the best they can, but are hurting. Men who are trying to understand more, do better, love harder, but aren’t sure if it’s worth the pain and exhaustion. Men who are confused, unsure, lost, and in need of answers.

Dear man, the fact that you love your woman so much that you are willing to read an article to understand her more is a truly wonderful thing.

That you would message me in the hope of knowing how to love her better is admirable. Men like you are rare, precious, and so appreciated.

Men who are strong, brave, resilient, determined, loyal, and willing to love at a high cost because you understand the worth of the woman you hold in your arms.

You are a testament to the masculine heart that encompasses both strength and gentleness, fierceness and kindness. Hearts like yours are worthy of respect, and I give thanks that you have chosen to love the woman in your life with such determination, commitment and resolve.

I understand how hard it is to love a woman who has been to hell and back.

You are the one she hurts, because she is hurting.

And you don’t deserve that.

I know what that does to your heart. I know of the times you are so damn frustrated at not knowing what to do. I know you feel like no matter how much you love her, it will never be enough.

I know you are exhausted at times, and are not sure how much more you can take of this storm. I know you feel confused and sometimes none of it makes sense and you lay awake at night and wonder if it’s worth it.

But the thing is, you’re still there.

You’re still there because something tells you this is worth it.

It’s difficult for me to tell you how to best love the woman who has been to hell and back. No situation is ever the same, and I have not the mind and heart of a man in your shoes.

But this is what I can tell you.

My original article was not written to condone abuse of any kind.

Our society is vocal when it comes to domestic violence where women are the victims, but far less vocal to speak of men who are abused by women.

It’s real, and it happens, and I understand how my article may have been interpreted in this respect and how that may have confused and upset you.

But abuse is never okay, no matter from a man to a woman, or a woman to a man.

But you are not obligated or responsible to stay there in the face of abuse. You must still, always, protect your heart.

The woman who has been to hell and back needs to be responsible for her own healing. It’s not an easy journey, nor a fast one.

There are many hard days, many times she will get stuck and not know the way forward. But the important thing to consider is that she is trying – for herself, for you, for your relationship.

Kathy Parker
Writer. Poet. Survivor. Warrior. Word Alchemist. Kathy Parker is a lover of beautiful words and wide open spaces; a wild heart, passionate soul and gentle spirit. She is a survivor of abuse, a sufferer of Complex-PTSD. Her greatest desire is to see all women empowered with the truth of their glorious worth. She is a contributor for The Mighty, Thought Catalog, Truth Code, Lessons Learned In Life and The Minds Journal and also has writing published at Huffington Post Australia and Elephant Journal. The Unravelled Heart, a profoundly true reflection on trauma, abuse, love, loss and healing, now available worldwide on Amazon he Unravelled Heart
-Adverts-

There are some couples out there whose relationship doesn’t have any romance in it at all or the romance has decayed over time. Are you one of them?
Read more
wpDiscuz
12
0
Would love your thoughts, please comment.x
()
x
| Reply