How To Know If Someone Is For Real or Not? 14 Clues That Give Away A Pretender 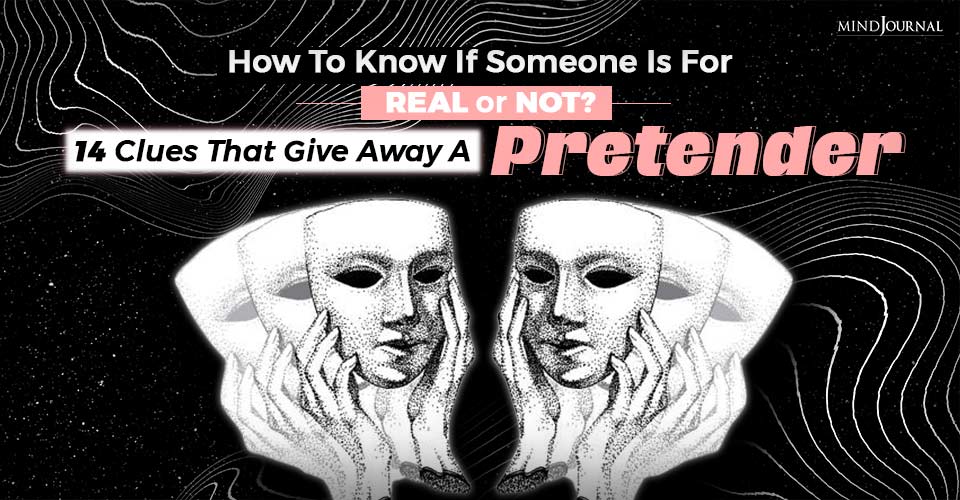 Dealing with a pretender can be a mentally, emotionally, and even psychologically draining thing, which can also end up taking a toll on your mental health. The truth is people don’t always reveal their true intentions. That is why it’s important to know the signs that you’re dealing with someone who is fake to protect yourself from those pretenders.

There are a million reasons why you might feel inferior to others and none of them are good. Unless you are in a dependent situation in which a superior abuses his or her power or is blatantly insensitive (which is a different subject altogether), it is not the other’s fault.

Just because someone occupies a higher rank in a hierarchy, you do not automatically have to feel inferior. A lower rank is —often temporarily—a fact; a feeling is one possible response to this fact. There are plenty of other possible responses.

You can, for example:

Related:20 Useful Psychological Tricks That’ll Give You An Edge When Dealing With People

It falls under your responsibility to find out the triggers of your felt subordination. But here lies the problem. You might not be able to figure out just why the other makes you feel so bad. Afraid that people are not created equal after all and that you are indeed an inferior human being, you might look in all the wrong places.

I call such fears ghosts. You should know that it takes courage to face and embrace them. Your happiness depends on discovering that you, like all people, belong to this creation and can draw peace from this discovery (see Part III in A Unified Theory of Happiness).

On the other hand, you might just rush to the wrong conclusion. The person to whom you feel inferior, might not even be better or better off in any way. He or she might just be wringing it and faking his or her way through life. Some pretenders are easier to spot than others.

Many actually believe that they are rich when wearing a designer item or driving a car they cannot afford; smart when speaking in convoluted sentences; confident when bragging, beautiful when hiding behind a mask; the kind when showing off; witty when being insensitive and loud; scientific when citing an avalanche of studies; modest when asking to be praised.

How do you know when someone is or isn’t “the real deal”? Once you can spot a pretender, you might just spare yourself the feeling of inferiority. Here are 14 clues that give away the pretender.

14 Clues You Are Dealing With A Pretender

To keep up a facade, a pretender must make up things as he or she goes. While plenty of people use white lies to get along socially—which I do not recommend—a pretender uses inconsistencies or blatant lies to get an advantage. For many years, a German postman successfully pretended to be a psychiatrist by making up not only a degree but by citing fake studies and making up concepts.

Before you let yourself be bedazzled and bamboozled, take notice, confront if appropriate, and keep your distance.

Most pretenders make up for the insecure foundation on which they stand with an overly secure appearance. Others are supposed to be impressed by his or her confidence. While speaking self-assuredly is a great and learnable trait, being overly so is annoying to people and can give away the pretender.

True, some pretenders speak quietly to avoid exposure. But many hard-core pretenders speak loudly to squelch any doubts in those who might sense their weak foundation. Do not let yourself be swayed by volume. In the end, it’s all hot air.

When a pretender is afraid of being exposed, he or she might quickly change the subject. This behavior is also a symptom of short attention spans or plain defensiveness. I am sure we are all familiar with the latter.

But take note if the other will not return to the subject with repeated and, more important, respectful attempts, especially when also displaying the following clues.

Related: 7 Tips On How To Deal With Fake People In Our Lives