8 Things Parents Do That Keep Children From Succeeding 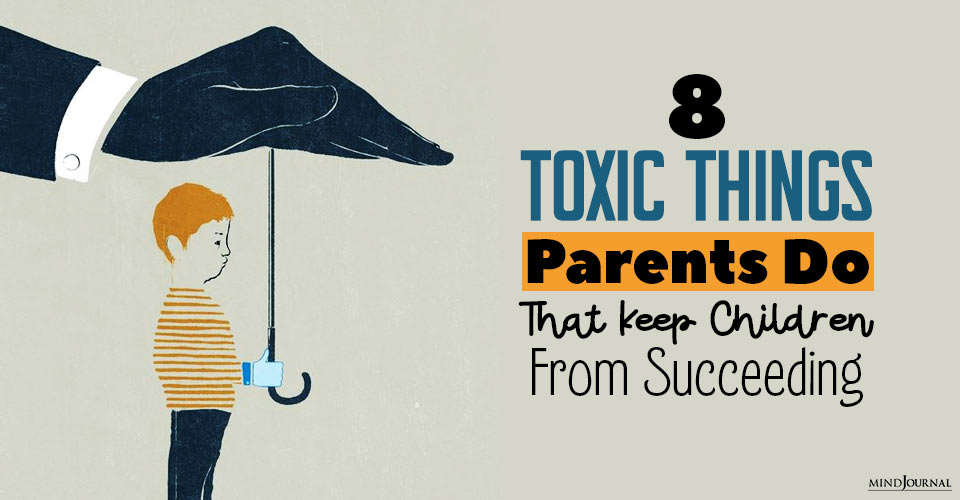 There are so many toxic things parents do that restrict their children’s autonomy and prevent them from becoming successful in the future. And not just that, it also hampers their chances of being the very best version of themselves.

It is true that parents are our biggest protectors, our best friends, and our mentors. They spend their entire lives trying to make sure that we end up as good human beings and help us become the best versions of ourselves.

But sometimes, when certain boundaries are crossed, the result might be the absolute opposite.

It is necessary for every parent to draw a line to their strictness and understand that they can only teach their child to crawl, they cannot teach them to run.

At the end of the day, all of us are individuals and have to learn things by ourselves. We can only be guided. Their motives are indeed pure, but some parents go overboard with their methods.

Related: 12 Signs of Bad Parenting! Are You One of Them?

You can only feed your child but it is they who will have to ultimately chew the food. It is because of this reason that people say that the strictest parents raise the best liars.

There are some parents who will do everything for their children except let them live their own life. It is also said that being overly strict with your kids can lead them to have low IQ and confidence.

Read on to know more about the toxic things parents do that stop children from succeeding and also prevent their kids from becoming the best version of themselves.

8 Toxic Things Parents Do That Keep Their Children From Succeeding

1. Keeping them inside a box.

Sometimes parents are so scared of their kids facing failures that they don’t even allow them to try new things. This is one of the most toxic things parents do to their children.

Yes. This is one of the most personality damaging things that parents do. No, we aren’t asking you to be cold to your kids.

What we’re trying to say is don’t be excessively heart-warming. This will make them get used to constant acknowledgment and may create issues later in life like at work.

3. Constantly spying on them.

Keeping a watch on your child is absolutely fine and in fact, is important to make sure that they haven’t taken the wrong track.

However, one of the major signs of overly strict parents is constantly spying on their kids. The more you try to find out about them, the more secretive they become. Spying is toxic behavior and this is also the reason why most kids don’t open up to their parents.

Related: 10 Do’s and Don’ts To Keep Your Parenting Healthy and Non Toxic

4. Forcing them to bottle up emotions.

Another toxic thing most parents do is force their kids to be emotionally strong which makes them bottle up their feelings, thoughts, and emotions on the inside.

They are made to believe that expressing your sentiments isn’t a good thing and is for the weak. So the more you suppress, the ‘stronger’ you are. In such cases, setting boundaries with toxic parents might be a good idea.

Another one of the major toxic things parents do that end up causing a lot of harm to the kids, in the long run. Loving your children doesn’t mean spoiling them excessively.

Let them do it! Don’t place everything in front of them. Let them take responsibility on their shoulders when the time comes.

6. Trying to protect them from bad influence.

Don’t do that. Let them decide who they want to be friends with and help them in differentiating between good and bad people.

Related: 10 Things Toxic Parents Say And What They Actually Mean

One of the most toxic things parents do is be excessively strict with them. We know you are concerned about their future and life, but don’t overdo things.

Too much strictness will only force them to hide things from you and create a lot of emotional and mental distance between you and your child. Let them explore the world on their own and let them make mistakes; this will help them understand the beauty and reality of life.

8. Not practicing what you preach.

Some parents teach their kids to be kind towards others but often treat people around them poorly. They tell their kids how violence isn’t the answer but actually end up portraying the exact opposite of it.

Kids emulate their parents more than they think, and what you are doing is going to have a direct impact on them. Make sure you practice what you teach your kids, otherwise they will simply adopt what they see with their eyes.

These are 8 toxic things parents do that can stop their children from succeeding. What other things would you like to add to the list? Let us know your thoughts in the comments down below.

Want to know how to deal with toxic parents? Check this video out below!