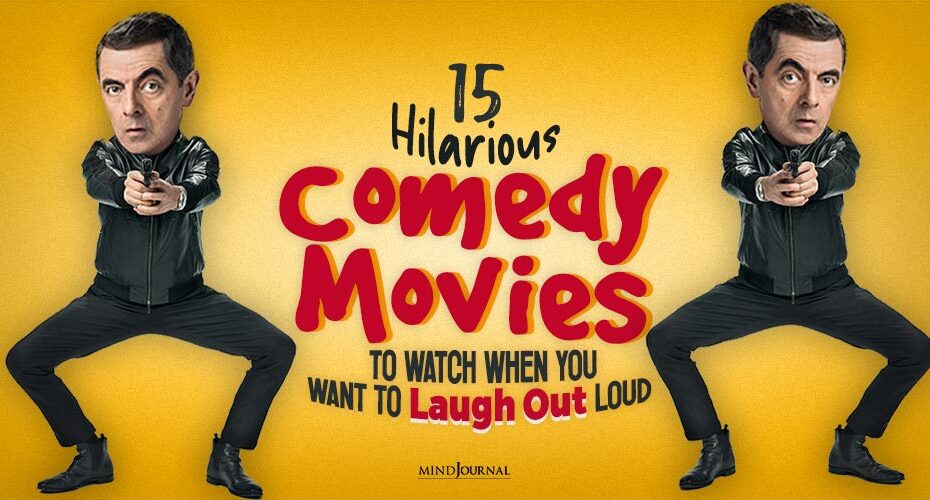 Laughter is an expression of joy. From releasing endorphins in your brain to reducing the risk of heart disease, there is a whole list of health benefits granted by a good laugh. Nothing feels better than a genuine laugh and watching comedy movies is one of the best ways to tickle your funny bones. Here we have collected 15 hilarious comedy movies to watch and laugh out loud with your friends and folks this festive season.

“As soap is to the body, so laughter is to the soul.”- JEWISH PROVERB

They should seriously add a ‘laughter class’ in those wellness programs they advertise all the time. Stand-up comedians really need to step their game up or should I say they really need to ‘stand-up’.

But I’m glad their craft is appreciated on the big screen so everyone can have a ‘laughter class’ while being entertained by a dynamic storyline. Yes, comedy movies. What would the world be without our ridiculously amusing comedy movies?

There’s almost never a wrong time to watch a good movie that makes you split your sides. You can always use a good laugh here and thereafter a long day of well… staying at home. So why not check out our list of hilarious comedy movies that will make you roll on the floor laughing to reap all the health benefits of good laughter.

Here are 15 Hilarious Comedy Movies That Will Make You ROFL:

This American buddy cop action comedy film will entertain you from beginning till the end. I loved that perfect blend of humor, action, and suspense in the movie so much that I have already watched it 10 times.

Schmidt and Jenko are high school friends turned cops working on a serious mission to uncover a drug trade. Will they be successful? Watch out to know!

A musical comedy film directed by Jason Moore is about college student Beca, who reluctantly joins an all-girls a cappella group. She helps the outstanding singers of the group come out of their comfort zone and infuse some freshness into their traditional methods so that they can win in the top of college music competitions.

This one is a perfect movie for those who love singing and comedy!

One of the best comedy moues ever with a solid plot and a good heart and a lovable hero, who’s never “done the deed”. But he meets a single mother and finds increasing pressure from his friends, who are on a sacred mission to end his 40-year drought.  Will he lose his virginity?

The romantic comedy-drama film chronicles Shy Georgia’s life of frustrated desires. She discovers she has only a few weeks to live and tries hard to be happy. If you want to unwind this festive season, this is the must-watch movie. It will take you to a better place far away from reality.

This movie is hilarious and made me laugh out loud. Brennan and Dale, are two never-employed brats who still live with their parents. They are forced to share the same room when their parents get married.

Not just good humor, the movie is surprisingly touchy too. Will there be a happy ending?

This is one of my favorite romantic, comedy movies. Gil Pender, a screenwriter, arrives with his materialistic fiancée and her family in Paris. The couple has divergent goals and Gil is forced to confront the shortcomings of his relationship.

Directed by Woody Allen, the themes of nostalgia and modernism along with the realization of reality make the movie worth your time.

The movie portrays a San Diego television station where Ferrell’s title character clashes with his new female counterpart. The clash with an ambitious female reporter in the movie introduces us to various styles of humor. It’s a pure comedy with a sensational soundtrack and endlessly quotable dialogue.