15 Must Watch Movies Based On True Stories 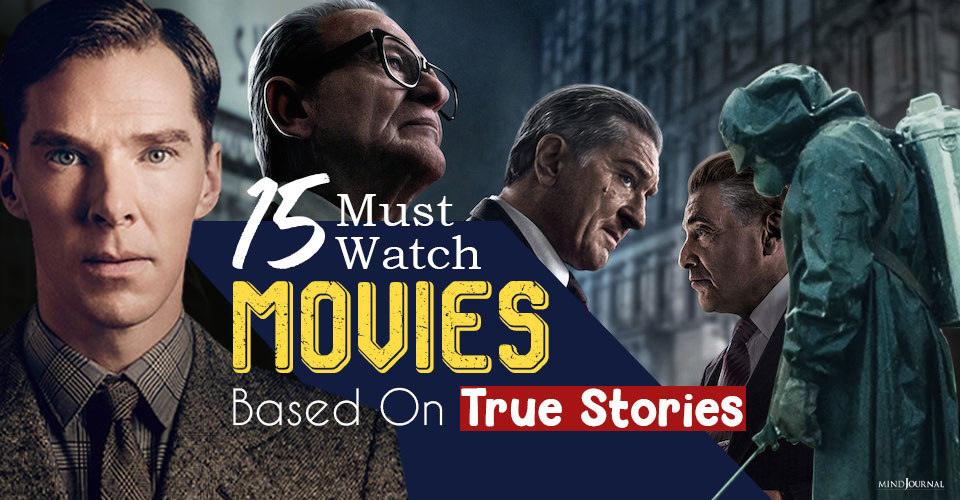 So you think you have become a movie maverick during the pandemic and have watched them all? Let’s put that to test, shall we? We have compiled here 15 jaw-dropping hits of all time but the best part is all of them are some well made movies based on true stories. See how many can you check off of your bucket list.

Sure the fiction genre brings gripping storylines and interesting characters that transport us to a make-believe world for some time but there are some really well-made flicks based on true events that are equally mesmerizing, visually appealing, and intriguing. Such movies have the power to make you reach for your phone to look up the original incidents and characters, as soon as the credit rolls.

So if you are ready to check out our pick of the best movies based on true stories, fill your biggest bowl with popcorn and prepare to have your mind blown.

Related: How about switching up the vibe of your cinematic experience with a little murder mystery? Here are 15 Suspenseful Murder Mystery Movies To Watch When It’s Dark Out.

Here Are 15 Movies Based On True Stories That You Must Watch:

When Mari Gilbert’s daughter Shannan disappears, she couldn’t help but take matters into her own hands. Police inaction sent her off to launch her own investigation that lead to a gated community in Long Island where her daughter was last seen. Thanks to her quest the unsolved murders of over a dozen sex workers were brought to attention.

This movie based on the serial killer Ted Bundy looks at the heinous murders committed by him from the perspective of his longtime girlfriend Liz who lived in denial for years and couldn’t come to terms with the real identity of her lover. This chronicle of psychopathic killings is sure to send a shiver down your spine.

This hard-hitting narration of bias and racism revolves around five teenaged boys from Harlem who become trapped in a nightmarish ordeal when they’re falsely accused of a brutal attack in Central Park. This movie based on a true story will make you uncomfortable and force you to ask some difficult questions that need to be answered.

An ex-hitman named Frank Sheeran narrates incidents from his past life. As a trusted ally of the Bufalino crime family, he had some well-kept secrets of crime and death. The movie based on the true events of the mafia world will give you an insider view of the wrong side of law and order.

This movie retells the horrific incident that shook the world in April 1986. This true story recounts how an explosion at the Chernobyl nuclear power plant located in the Union of Soviet Socialist Republics became one of the world’s most dreaded man-made catastrophes.

The true events that lead the Boston Globe to uncover the huge scandal of child molestation and cover-up within the local Catholic Archdiocese, have been well documented in this movie. The event that shook the very core of the entire Catholic Church and uncovered a shocking story of exploitation, is sure to give you sleepless nights.

This movie is the true story of Alan Turing, the English mathematical genius. He along with some fellow mathematicians tried to crack the German Enigma code during World War II while also attempting to manage his own troubled personal life. This true event drama will keep you at the edge of your seat.

This movie is set in the late 1970s and follows two FBI agents who are interviewing serial killers to solve open cases. This psychological crime thriller is based on the book 1995 book of the same title. It gives a sneak peek of the FBI’s serial crime unit investigation.

This historical movie tells the story of a very unlikely friendship between Queen Victoria and an Indian clerk Abdul. After Abdul arrives at his majesty’s service from India the two forges a deep alliance that raised quite a few eyebrows within the royal family. As many tried to ruin this friendship it kept on blossoming much to the dismay of others.

This is another true story which tells the hidden truth about the US mortgage market. During 2006-2007 when a group of investors bet against the mortgage market of United States, they discover the corruption and flaws that dominates the market. This movie will make you sit up and take notice.

This movie shows Billy Beane, who is the Oakland A’s general manager, attempt to put together a baseball team on a shoe string budget. He takes the help of computer genrated analysis to find and recruit new players. Prepare to be amazed and have your minds blown out by this one.

This humanitarian tale of love and compassion goes back in time to talk about the kind hearted Paul Rusesabagina, who was a hotel manager. He helped out and sheltered more than a thousand Tutsi refugees during their struggle against the Hutu militia in Rwanda.

It will be a fun and exiting ride to know the events that gave birth to the phenomenal Facebook and social media market. The movie follows Mark Zuckerberg on his journey to create Facebook. He gets sued by a twin sibling who claim Mark has stole their idea and also by the co-founder of the social media platform.

It is an inspiring and heart touching saga about a 13 year boy in Malawi who invented an unconventional method to save his family and community from a devastating famine. He was thrown out of shool because his family couldn’t pay his fees but defying all odds he learnt to change the course of his destiny.

This movie documents the crucial period of the history of Catholic Church when the conservative Pope Benedict XVI was about to leave the vatican duties in the hands of the future pope, the liberal Pope Francis. The two must come to a reconciliation in order to forge the future course of the Church.

Make sure to let us know your favorite movies based on true stories, the ones that left your jaws on the floor and your eyebrows shooting up.