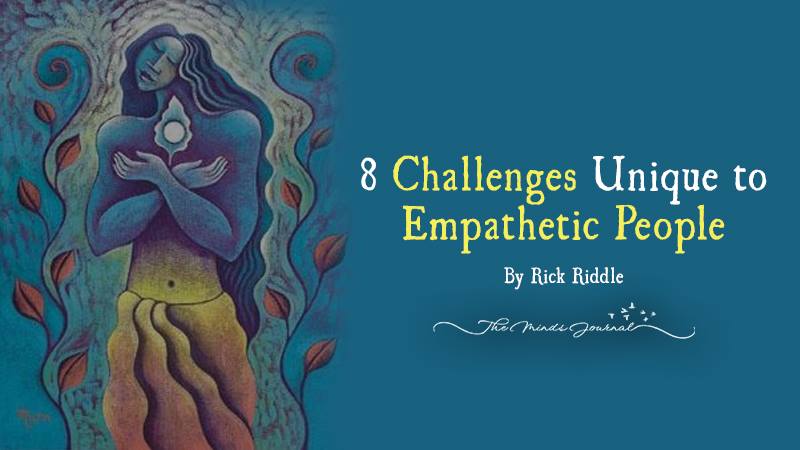 Do you know empathetic people face challenges while relating closely with the emotions and issues of others?

We all have gifts, some more than others, and empathy is one of them. The Merriam-Webster dictionary defines empathy as the ability to understand and share the feelings of others. That sounds that the kind of trait that the world is running short of, yes?

Look at all the hatred and atrocities going around. So then, there is no way, anyone can have too much of empathy, right? Wrong!

After all, too much of a good thing, will not be good for too long. And this is a story that the empathetic people know only too well. In fact, it is so prevalently a challenge to live with that there is a need to turn the gift of empathy on and off. Just look at some of the things that very empathetic people (VEP) have to battle from day to day to understand.

When in a relationship of any kind with another human being, an overly empathetic person will tend to feel into their partner’s shoes whenever they are in a problem. Overactive empathy drives them to do excessively so that they start to embrace their problems and take on their responsibilities all in a bid to make the situation better for them. They are prone to falling prone to abusive people who use circumstances to exploit them and abscond the role they are supposed to play in a balanced, healthy relationship.

Related: 5 Ways You Feel When In A Toxic Relationship

It is exhausting enough being a dedicated lover to one partner, parent to your children, and friend to your friends. Now imagine the same level of dedication projected to every single person that you meet going through problems. It is said that you can only love the other person as you love yourself, but this does not hold for the empathetic people. They often carry too much baggage belonging to other people that they forget their own care.

In social settings, the empathetic members of a group relate closely with the emotions and issues of others. As a result, they often overlook social mannerisms such as small talk. They are straight shooters, directly engaging other people on issues that may not be entirely welcome, especially to people who do not understand them.

Inability to sustain a debate

As an empathetic person, you may have a legitimately valid point in a discussion or argument but remain unable to drive it across effectively. Why? It is extremely exhausting for them. This is because you understand where they are coming from too often. The result is that coming from a point of understanding, you expend too draining to sell your point when you are already sold on their argument.

VEPS always relate too easily to the circumstances of other people, often to their detriment. Resultantly, they often fall prey to the influence of other people to engage in certain activities, even if you are not interested in it themselves. Empathetic people understand their need to undertake the activity even if it contradicts their own values. To avoid such situations, it is healthy that they take some time on their own to touch base with themselves.

This way, they can learn who they really are and unlock their full potential, as they are not subject to the emotions of others. In the same vein, they are often unable to have fun when they go out and the people accompanying them are not completely enjoying themselves. To completely enjoy themselves and discover what they genuinely enjoy, VEPs need to go out exploring on their own too.

You are probably wondering how possible it is to relate to all others yet loathe themselves. This is how. Empathetic people can listen to the plight of the worst people in history and understand them. They will often read the stories of people who have committed unspeakable atrocities and still see the positive aspects to it.

They will be able to relate their ruthlessness to childhood abuse or other such problems, for instance. Society, on the other hand, castigates such people unconditionally and that is seen as the norm. In the eyes of society, therefore, the VEPs are doing wrong. The VEPs can relate to this viewpoint as well and they hate themselves for being that understanding.

Watch out this interesting video on 6 habits of highly empathetic people:

Blurred Lines Between Reality and Fiction

Most people are able to watch a horror film while laughing. Others can be cynically watching a romantic movie, completely detaching from the obvious fiction. This, however, is a luxury that very empathetic people do not enjoy.

When watching a horror movie or any story of suffering, for instance, they can completely relate to the character’s fear or pain. The result is that instead of the film being an enjoyable activity, it ends up a torturous encounter for them. The same case happens in the case of happy stories in works of fiction. When continued, this ends up as a challenge for the VEP.

In extreme cases, the empathetic people can get caught up in another character’s personality, whether the character is real or fictional. This is especially true when there are periods of extended contact with the other characters such as in the case of a long book that they read over a period. Similarly, when the person is close to a person going through an emotional situation, there may be a tendency to assume their personality.

Do you know of any other challenges of highly empathetic people? Leave a comment below.

Rick Riddle is a successful blogger whose articles aim to help readers with self-development, entrepreneurship and digital marketing.View Author posts