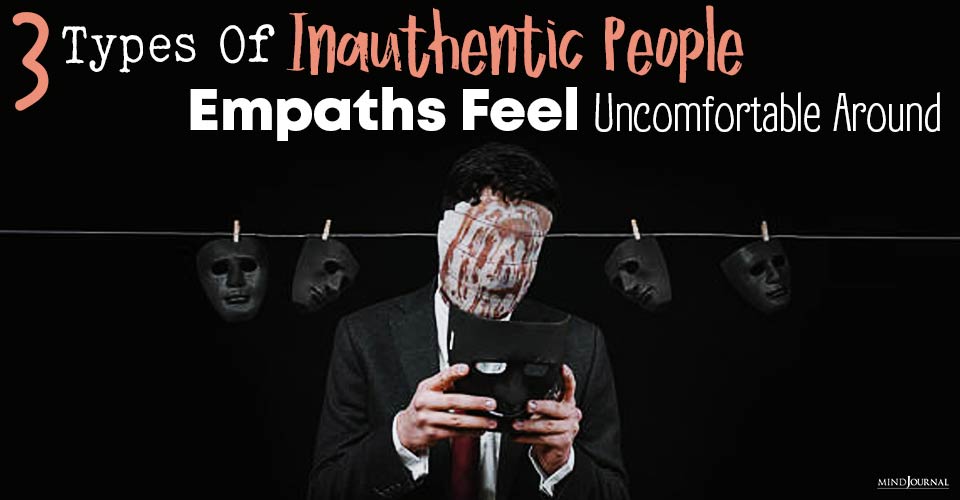 Empaths freeze around inauthentic people, because they cannot stand their judgemental and critical nature. They just can’t understand why people would be so unkind and cruel to other human beings, and that too without any reason whatsoever.

They tend to shut themselves down in order to protect themselves and their energy, otherwise, it takes a toll on them and they end up getting overly stressed out. In other words, being around inauthentic people is nothing short of hell for them.

Because empaths are so sensitive toward other people’s energies, they tend to pick up on subtle cues that other people don’t. They are extremely keen observers and nothing goes past their intuition. It’s very difficult to lie to them as they can always see through the lies and understand the real intentions and motivations of people.

Read on to know more about the types of fake people, and why empaths freeze around fake people.

Related: 15 Ways To Stay Grounded And Protected As An Empath

Egocentric people are always hard to deal with, even if you are not an empath, but especially so if you are an empath. Since they are always so over-controlling about everything, they never try to understand others, nor do they have a compassionate bone in their body.

Even though empaths genuinely feel sorry for them, they choose to stay away from them, because it emotionally drains and exhausts them. After a point, they need to look out for themselves and their energy, and being around inauthentic people like them is nothing short of a nightmare.

Empaths feel compassionate towards people in pain and look at life differently. They hate being around aggressive and angry people, and will always be able to pick on their negative vibes and notice their hateful emotions.

If there’s one thing empaths strongly dislike, it’s small talk. Empaths are deep thinkers who love to talk about deep things, instead of what the weather is like. They love to know people on a deeper level so that they can build a strong and meaningful connection with them. This is why they find it very hard to gel with superficial and fake people.

Inauthentic people like them annoy empaths, and they try their best to stay away from them. Being superficial means you don’t believe in yourself, and you are being fake because you don’t feel comfortable showing your authentic self to the world. And this is the exact opposite of an empath.

Empaths are always very comfortable with themselves, and they never try to change themselves to please the world. They know who they are, and they always believe in being their most authentic self. So, it’s really not a surprise that they feel uncomfortable around superficial people.

Empaths have soft and kind hearts, and this tends to attract many manipulative and opportunistic people, who are always looking to exploit them for their malicious gains. Taking advantage of their compassion, kindness and sympathy is what they do, which ends up destroying an empath’s heart.

But these manipulators often forget that empaths have sensors too. They can read things by observing their vibes, words, and actions. When empaths come in contact with such manipulative opportunists, they stay on guard the entire time and protect themselves from such abusers!

Empaths try to stay as far away as possible from inauthentic people. They always look for people who are genuine and good at heart. Narcissistic, egoistic, and self-centered people are simply not their cup of tea.