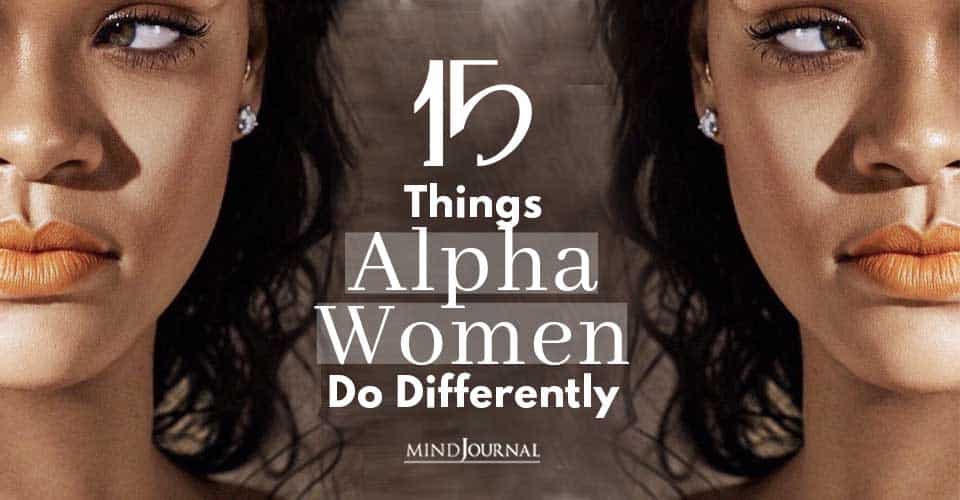 Alpha women live life on their own terms, and have so much self-belief in themselves, that it is next to impossible to bog them down. No matter what life throws at them, they hit back with double the force and strength. Alpha women are invincible, in the truest sense.

There’s a quote by Laurel Thatcher Ulrich that states: “Well-behaved women seldom make history.” It’s an often posted on Pinterest boards and slapped onto cards with women in 1920s-fashion kicking up their heels in unison.

But for me, this sentiment is more than encouragement to go on a girls trip and go wild; it’s a celebration of women who choose to be defined by their courage, bravery, and decisions to go after the life they want to live instead of being confined by “appropriateness.” Call them bold, fearless, or powerful, these are women who light up a room with their magnetic energy.

They intimidate the close-minded and inspire those who have long hungered for tangible proof that they, too, will serve themselves well by igniting their passions and relishing in their independence. I know a few of them very well and they have changed my life (and helped me to unleash my own inner badass).

1. They cultivate a life they actually enjoy living.

Whether they’re single, coupled or in that complicated gray area, they commit to creating and living a life they love. While they may not feel 100% comfortable initially, they push themselves to take the class, book the ticket, try the restaurant and understand that life won’t wait for them if they’re choosing to wait for a specific someone to enjoy it with.

2. They make their move.

Whether it’s walking up to a stranger and saying hello, putting in an offer for an apartment they want, or asking their boss for more responsibility, bold women would rather risk hearing “no” than sit on the sidelines and hope someone else will bring them the opportunity they desire.

3. They don’t put themselves down.

Very few men and women walk this earth feeling one hundred percent happy with their looks and life one hundred percent of the time. But fearless alpha women accept the fact that there will always be someone younger, smarter and thinner than they are and don’t stress it because, well, that’s not the point.

These women know they’re not defined by any one attribute (and certainly not by something as small as a few dimples on their backside.) They know they’re a whole package and that package is so f*cking awesome it demands to be spoken about with respect.

4. They don’t need a boyfriend but they’re open to having a partner.

In a world that treats singledom as a disease that needs to be treated, it’s refreshing to meet a woman who’s not only OK being on her own but unwilling to compromise the time she spends with friends, on her career, or enjoying hobbies just to have any old someone in her life. Fearless women aren’t looking for a savior, a benefactor, or a boy toy.

In fact, they are not even looking. The bold and fearless woman is, however, excited when she meets a man who understands her, accepts her, respects her, respects himself, and is looking in the same direction as she is.

We all have situations we wish would have gone differently but a bold woman knows that the only thing the past can do for her is serve as a lesson in how to do better for herself here in the now.

6. They call people out.

They aren’t the type of women who will sit silently in front of someone feeling disrespected or violated and then cry about it over cocktails. They will call those people out, set a boundary in place, and move forward right then and there.

7. They know when to walk away.

They know that bending themselves backward, forward (and backward again) in an attempt to make something work –a friendship, a relationship, a failed decision-usually means they’re investing time and energy into something that isn’t offering respectable returns.

Witty text sessions can serve as fabulous foreplay in-between dates but spending day-after-day texting a guy you never meet? Fearless and focused women are not looking for pen-pals. Instead of spending hours replying to winky faces, these women encourage face-to-face contact because they know that any man who’s serious about them will want to see their real smile in real-time.

9. They give themselves a real chance to meet someone.

Swiping right has its place and Match.com has made some real-life connections, but these ladies know there’s a real value in getting out into the world and having human interaction in a space that’s supportive of an introduction.

They enjoy the clubs with their girlfriends but aren’t afraid to pop into a sports bar, networking event, museum opening, gallery showcase or even a trip with a carefully curated guest list.

Related: 7 Ways An Alpha Woman Stands Out From The Rest

10. They don’t pretend they’re on an episode of “The Bachelor.”

Compete for a man’s attention and affections? You’re kidding, right?

They aspire to be a star in reality over a reality star.

12. They see themselves as an investment.

They take pride in themselves. From their word, work ethic, and reputation to their friendships, manicure, and handshake, these are the women who invest in themselves without the slightest bit of apology.

They know people will do things to let them down and even screw them over–such is life. What they won’t do is re-live that scenario a million times over. They know they are in full and total control of how they react to a situation and when the going get’s tough, they learn their lesson, roll up their sleeves, and get tougher.

Whatever “it” is: the job, the guy, the bucket-list experience, or adopting a baby on their own, these women think things through, make a plan and bring their own unique idea of happiness to fruition.

15. They would never put their lives on hold to accommodate someone else’s idea of who they should be.

Instead, they get into the driver’s seat, turn-up their favorite tunes and go in the direction of their dreams.