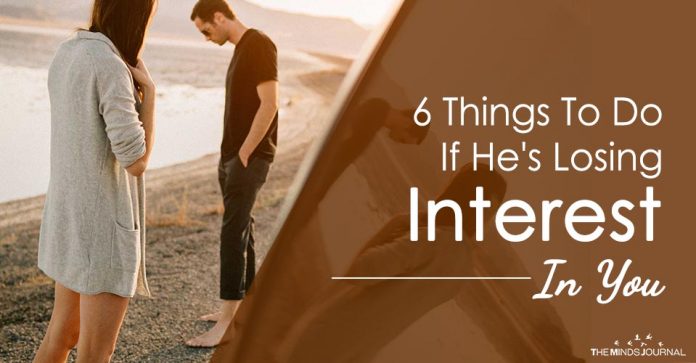 6 Things To Do If He’s Losing Interest In You

We have a lot of advice floating around on how to know if a guy is interested in you or if he is losing interest in you.

But what can you do if he seems to be losing interest in you? Can you regain it back? Should you even try?

It is a paradox but most of the mechanics that you try to regain your lost love interest are actually counterproductive.

Here is a list of six things that you should generally integrate in your life at all times that lead to a happy, healthy and fulfilling life, which is actually a key to attracting fantastic people and relationships into your life.

If a guy seems to be losing interest in you, review this list and see if you are not integrating these things in your life.

6 Things to do if he’s losing interest in you:

This is easier said than done. But it is so worth it!

First of all, know that freaking out never works. Your drama will just repel him further.

Just take a step back and reflect.

If it feels like he’s losing interest in you, should you pursue him?

But let me just break it you, it just does not work that ways. He is not a prey, so don’t try to be a hunter!

If he loves you he has to come to you out of his own free will, not because you chased him.

If you keep on chasing him and don’t give him any space to pursue you, how will you ever know if he is really interested in you and wants to be with you or he is just staying with you because it’s easier than witnessing the drama that you would create if he tries to leave?

Just don’t do anything and relax. You have nothing to be scared about. If you don’t hear from him or he doesn’t make any efforts to stay in touch, you have all the answers that you need. It was not meant to be in the first place and it was not going to work out anyways.

When you take a step back and let the man lead, you learn about him- who he is naturally when you are not trying to get him to behave in ways that you like and what he really feels about you. If you just keep on chasing him, you will never know anything except how he reacts to being chased.

The right mindset to cultivate is to have a single mindset till you and your partner have explicitly committed to each other.

He is not your boyfriend and you should not treat him like one, especially when he appears to be losing interest in you. You’re just dating to know about each other and if he is showing signs that he is not interested in you, then take note of that information and adjust your behavior accordingly.

Until he becomes your boyfriend, just remember that he is just another guy that you are dating to find out if he could be compatible with you.

I know it can be very tempting to close your eyes and not notice other guys when you have your heart set on one guy but just think that if he has not decided to make the commitment to be in a relationship with you and he wants to keep his options open – why would you want to give your all to him?

The best way to cultivate a single’s mindset is to date other men –not to make your guy jealous. It’s not about him. It’s about you.

You should really keep an open mind about men and give them a chance. Go out and date them and get to know about them. Do not compare them with your guy or put him on a pedestal (no one is worth putting on a pedestal anyways!) and you could just blind yourself to other options, other men who have some fantastic qualities by fixating on this one guy!