4 Toxic Behaviors That Are Ruining Your Relationship 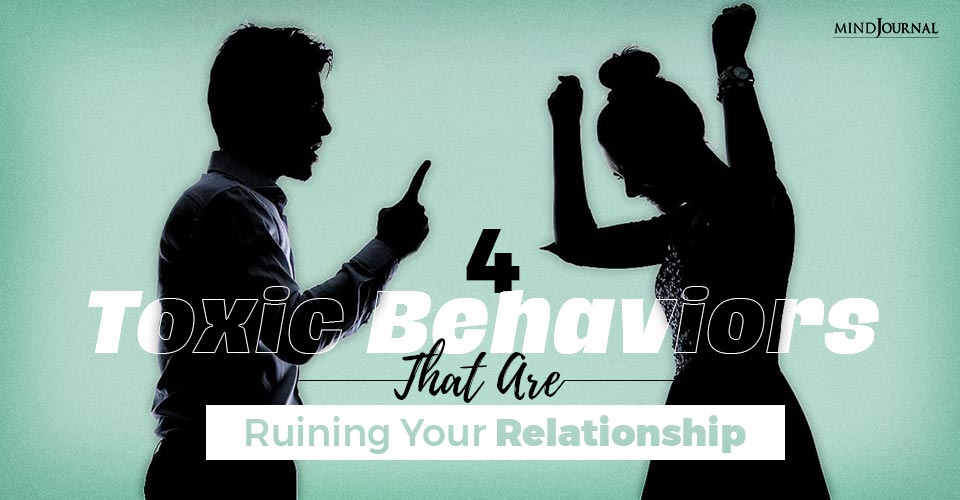 Any romantic relationship where partners display toxic behaviors, such as lying, manipulating, distrusting or dominating, is considered to be a toxic relationship.

Marriage researchers have found 4 toxic behaviors that almost always end up being signs leading to divorce or break-up (or a very unhappy relationship) when present in your relationship.

Renowned American psychologist Dr. John M. Gottman is a well known and respected marriage researcher who identified these toxic behaviors and is able to predict the outcome of a relationship with over 90% accuracy just by observing a couple for 30 minutes while having an argument. If these toxic behaviors (which he calls The 4 Horsemen of The Apocalypse) are present, Gottman predicts the odds are not in your favor.

What Are Toxic Behaviors?

Many people report feeling trapped in a bad marriage when toxic behaviors are present in their relationship. They report fighting about the same things over and over again with no resolution. You can imagine that if your arguments always escalate to the point where they are unable to be resolved, then it can take a major toll on your relationship over time.
OK, now that we have defined toxic behavior in relationships, let’s talk about the behaviors more specifically, and, of course, how to change toxic behaviors.

If you or your partner are displaying any or all of these behaviors, it’s important that you make a commitment to first become more aware of the behavior and second to change the toxic behavior as soon as possible.

In order from least to most harmful to the relationship, here they are…

Now before you freak out thinking “So I can’t even communicate when I’m unhappy?” let me reassure you it’s ok to tell your partner about things you would like them to change in a respectful and productive manner. However, criticism is a different (and harmful) habit. Criticism is attacking your partner’s personality or character, usually with the intent of making them feel wrong.

Related: The Connection Between Verbal Abuse And Anxiety that no one talks about

Try following this formula – “I feel X when Y happens and I would prefer Z.” This is the formula for a softened startup and sounds very different from a harsh startup which is sure to make your partner feel defensive. Let me illuminate with another example of this toxic behavior.

You come home after a long day of work, walk into the kitchen, and see that the dishes are piled up in the sink. You specifically remember doing the dishes before you left this morning and you are immediately stressed out seeing the mess.

Dr. Sarah Schewitz is a licensed psychologist specializing in love & relationships and founder of the successful online psychology practice, Couples Learn. She has been working with couples and individuals to improve their love lives for over 10 years now. Dr. Sarah has been featured in outlets such as CNN, Readers Digest, Women’s Health, Bravo TV, Better Homes & Gardens, Self, and more.View Author posts