How Chronic Stonewalling Imprisons A Relationship 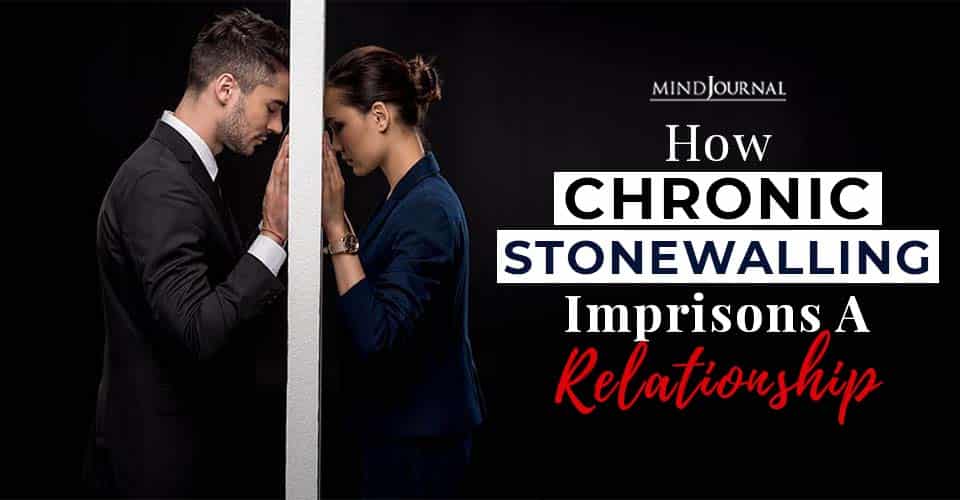 Chronic stonewalling is something that can gradually chip away at your happiness, and relationship, and if it’s not resolved in a healthy way, it can end up ruining the relationship for good.

Have you ever watched a child try to get attention from their mom or dad?
“Pay attention to me.”
“Look at me.”
“Mommy, daddy, watch me.”

But what happens if the child’s attachment figure is unavailable and unresponsive? The child will experience distress.

It doesn’t matter if you are 5 months old or 45 years. There are still two basic responses to an unavailable attachment figure.

When our romantic partner is unresponsive and unavailable, we protest. We act like an infant banging a rattle on the side of the crib. We make as much noise as possible to try and get attention. As adults, we do this by becoming critical, or we make excessive attempts to reestablish a connection.

And if the consistent response is being ignored or dismissed, the child curls up into a ball and hides in the corner. As an adult, we will stop fighting for emotional connection and give up on the relationship altogether.

Despair has set in.

Related: Why Narcissists Use Stonewalling As a Nasty and Powerful Defense Mechanism

A couple was asked to demonstrate this scenario by having one partner intentionally be unresponsive.

This occurred in about 10 seconds. At the end of the demonstration, here is what Angela said when she was asked what she noticed in her body.

Angela: I… um… felt a lot of tension. I was frantic. Panicky. I became super anxious, even though I knew this was an exercise. And towards the end I just felt helpless.

This prolonged sense of turning away is what Dr. Gottman calls Stonewalling.

Everyone withdraws from a relationship when we are feeling hurt, or fearful of saying the wrong thing. This pause allows us to get creative about how to solve the problem.

But consistent withdrawal is toxic. Most romantic partners do not understand the profound impact distancing has on a bond.

Greg: “I don’t get why she is so pissed with me. I wish I could just shrug off her blaming, but I can’t. I need time to recover. Why doesn’t she get that?”

While Greg is being honest about the internal world of a stonewaller, he also neglects to mention one important fact: that he never wants to resume the discussion, because the emotions he feels are too overwhelming.

If either spouse refuses to communicate when conflict arises, it can be hard to heal a marriage. – Dr. Gottman

How can doing nothing be so triggering?

When looking at relationships from an attachment lens, this type of response is seen as a threat to survival. Psychologist Ed Tronick demonstrates the effect of stonewalling in a landmark study between mothers and infants called The Still Face Experiment.

This brilliant baby protests the emotional connection to her mother in a variety of ways. He points – he screams – he aggressively moves around in his chair. When these attempts fail, the baby withdraws by moving his face and body away. After a few moments, he starts to wail in a panic. It’s difficult to witness.