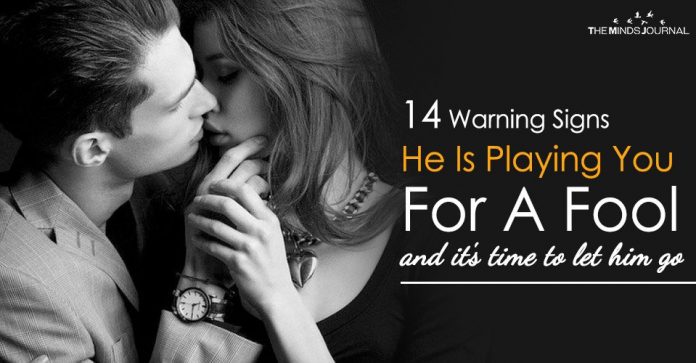 14 Warning Signs He Is Playing You For A Fool

They look like the stereotypical “bag ladies”, and even showed up for my friends‘ nuptials wearing multiple layers of ragged clothing and carrying some of their belongings in what were essentially re-useable shopping bags. But he had told her about them fairly early on in their relationship, and she did finally meet them. And let me say, as far as mildly deranged people go, they’re very sweet (I met them at the wedding), and they did a great job at raising their son/nephew.

So, the bottom line is that if the relationship has been going on for some time – just to put a number on it, let’s say over 6 months – and he hasn’t invited you to meet his family yet, it’s certainly time to question him about it. If he still doesn’t introduce you? Time to start planning your exit strategy.

9. He doesn’t spend the holidays with you.

I know there are situations, such as when a divorced man wants to spend time with his children at the family holiday get together, but even then he can make time for you either before or after his family time. Everyone knows how special holidays are to us women, and if he doesn’t, then that’s a sign of other issues (for example, not being considerate and thoughtful regarding your feelings).

If he’s just taking off on a surf vacation to Bali with his buddies over the holidays because that’s when it’s less crowded, and you’re not invited, then you’re clearly a low priority to him.

10. He’s got lots of female friends – and makes sure you know this.

In my experience, “platonic” friendships are rarely, if ever, that – there are almost always some feelings in one direction.

Either the guy is secretly harboring feelings for the girl, or vice versa. And when a guy is in a relationship, he has so much less time to spend with his buddies – why on earth would he ever choose to spend that precious time with another woman? Well, there are a number of reasons he might, and they all involve one deep seated issue or another, and none of them are good.

And making sure you know about it? That’s just playing games, and just another reason to get out and find yourself an emotionally healthy man to be in a relationship with.

If your guy likes to keep you guessing, there’s a reason. This is another sure sign that he’s keeping his options open. In a healthy relationship, there’s no hiding or secrets. If he’s not being open and upfront about his whereabouts, then stop worrying about it – just move on.

12. He doesn’t talk about his plans for the future with you.

I’m all for living in the moment and enjoying the “now”. But eventually in a relationship a discussion of future plans has got to come up – otherwise, you’ll never know if the two of you are sailing together or heading towards different continents.

If he’s not at least occasionally talking about the future with you then chances are, in his mind, you’re not in it.