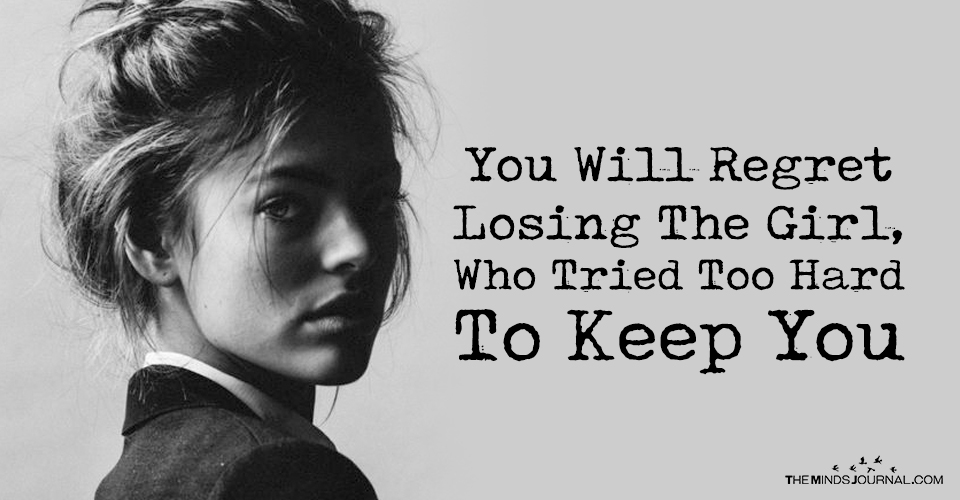 The day is going to hit you when you realize she’s no longer a choice you get to make because she finally chose someone who chose her.

You’ll cross paths and she won’t notice you because she’s staring at someone else laughing harder than you’ve ever seen her.
She’ll look and sound familiar but as you look a little more closely you’ll realize how much has changed about her.

What changed was the way she looked at you. She used to look at you with eyes of admiration but instead she started to look at herself that way. The way she used to build you up and admire you, you realize someone you thought wasn’t confident and needed you doesn’t anymore.

You’ll realize she looks a little prettier that far away even if she’s close. There’s something about someone you can’t have.

It’s going to be then you realize what it is you miss about her.

Every conversation where she talked about you.

Every text you knew with certainty would be answered a little too fast.

Every text you used to ignore and voicemails you hated that she left.

You’ll find yourself looking at pictures you didn’t want to take in the first place but she insisted you do so. You never knew looking back at those moments and memories would hurt so much.

You’ll miss the little details she filled you in on and how you really were a key player in her life.

You miss the messages that popped up when she saw something and thought of you.

Conversations of just wanting to know how you were doing.

How you’d part ways and she’d always say I love you, get home safely with a kiss on the cheek as she took off.

Those moments of missing her will hit you as you realize there aren’t a lot of people like her who genuinely care. And maybe it was annoying sometimes but there wasn’t anyone with better intentions. There isn’t anyone who wouldn’t do anything you ask.

You realize what you thought was desperation was really caring.

You realize what really seemed like she lacked confidence was her giving to someone who didn’t appreciate it.

You realize every time you thought she was different that’s what made her so special.

You’ll regret the fact you never told her all these things or appreciated her or thanked her.

You miss someone who never stopped trying with you. Until she had to because even after all her effort, she learned it wasn’t that she wasn’t enough it was that you weren’t.

It’s the nights you’ll stay awake and you remember when you used to text her and even at odd hours she’d always make the time to talk to you.

All those times you canceled and all she responded with was okay see you soon.

All those times you used her and she let you not because she was weak but she knew that reflected you and not her.

You’ll miss the words she said so carelessly telling you exactly how she felt and the actions that matched it.

You’ll miss this person who was always on your side wanting what was best for you. What she learned over time was it would never be her.

You think back to how much time and emotion and energy she invested into you and all you left her with was uncertainty and doubt.

Her absence and her silence will make you realize how much you must have hurt her. You look at your phone and you want to text her and ask how she is but you can’t even figure out how to say hello.

And it isn’t like you did anything wrong. But you didn’t do anything right either to make her stay.

That’s the thing about good people they stay for as long as they can believing in you. But you can’t keep them waiting forever. She walked away because she had to. Because she couldn’t keep trying and caring and putting herself out there only to get hurt.

She didn’t want to be wrong about you. And she hated that she was because she thought you were different.

She realizes she couldn’t be the only one trying here.

You’ll each move on and you’ll watch as she does. Maybe it’s across a newsfeed or snaps story. Maybe you’ll know she moved on because it almost feels like she’s vanished in a way. Not even caring to advertise her new relationship because it’s one she’s keeping for herself.

You wonder what’s going on but you can’t even find the words to ask.

She’ll meet someone who doesn’t have to lose her to realize she was someone of value and someone who deserved love and attention.

You’ll see her out and she’ll look at you smiling maybe even hug you like she used to. But everything about it will feel awkward because there is going to be a moment you two lock eyes and a realize it wasn’t supposed to end this way.

10 Secrets To Make Your Relationship Last A Lifetime

2 Biases That May Be Hurting Your Relationship

How Happy and Healthy Is Your Relationship? Take This Quiz And Find Out

5 Ingredients For Attracting Happiness and Healthy Relationships in Your Life 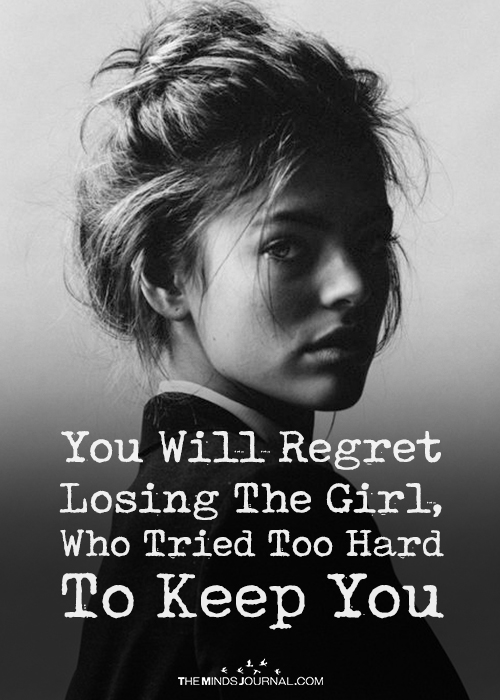