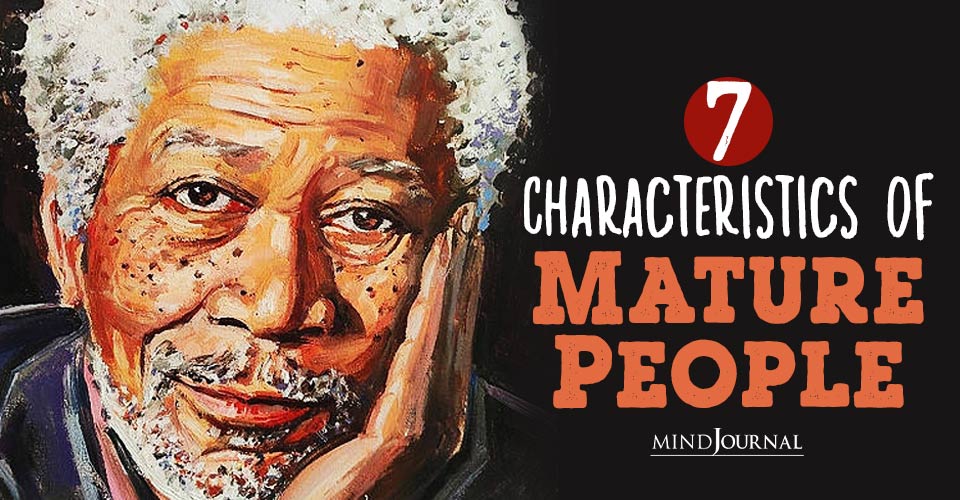 People say that “With age comes wisdom,” but a better saying would be, “With hardship and suffering comes even more wisdom.” No one matures and attains wisdom without a fair share of difficulties and setbacks. Mature people go through a lot to earn their maturity.

Every important life experience, especially the hardships and setbacks carries a meaning. The truth is that the things that almost destroyed you made you into who you are today. A variety of life lessons made you a mature, wise, and intelligent adult. So how do mature people act and what are the signs of maturity?

1. They can keep long-term commitments.

This is one of the biggest signs of maturity in a person. You can rely blindly on them when it comes to keeping commitments. They will never back out from their promises and will always do what they have promised you.

They understand the value of time and relationships, which is why they never mess with the trust people put in them. Mature people always keep their word.

2. Flattery or criticism doesn’t bother them too much.

Criticism can never shake their confidence because they don’t see it as an attack. Rather, they use criticism and harsh words as motivation to do better. Mature people never let a few bad words get to them and shake their self-worth.

Similarly, flattery also doesn’t have any sort of effect on them. If you are genuinely complimenting them, they will definitely appreciate it, but if you are trying to flatter them to get them to do something, then you’re knocking on the wrong door.

3. They are extremely humane and compassionate.

Mature people are extremely benevolent and empathetic toward others and their issues and problems. Empathy and compassion come naturally to them, and they are the most giving people because they’ve received the least.

They understand the value of empathy and compassion, and that’s why they always try to be as kind as possible. People who are mature will treat other people with respect and class.

Related: What Is Emotional Intelligence And Why Is It An Important Skill?

4. Their decisions are always based on character, not feelings.

Character comes from developing values, and your values form after you’ve faced obstacles. And that is the story of every mature person out there. Whatever decisions they make, they always base them on values and morality.

Mature people are driven by character and not feelings because they consider values to be more authentic and important. Feelings do matter to them, but not more than values and ethics.

Mature people always express their gratitude, no matter what the situation is. If they are going through tough times, they are grateful. If someone does even a little thing for them, they express gratitude for that. They are open-minded people who don’t just always brood on the negative things, they acknowledge the positive parts of life too.

Turning around and ignoring people who helped them in the past is not their style. They are the epitome of what it means to be a genuinely thankful person.

6. They know how to prioritize others before themselves.

Mature people have mastered the art of prioritizing. They are experts at tapping their priorities at the right time, and also know how to do the same for others, especially their loved ones. People who are mature are not always obsessed with themselves, they know how to make people close to them feel important too.

Most of the time, they prioritize other people over themselves and choose to think about their happiness and consider their feelings. Mature people have hearts of gold, and that’s why they do this.

7. Mature people seek wisdom before acting on something.

They are not irresponsible and reckless people, who just dive into something without giving it a second thought. They are wise enough to know about what can happen if they don’t think things through, and the harm it can cause somebody.

They fall back on their wisdom and experience and then take a call accordingly. Being impulsive and careless is not how they function, because they are smart enough to know that anything can happen, and not necessarily good.

These are the signs of mature people and their wisdom and maturity. How many of them could you relate to? And do you have any more to add to these signs? Let us know your thoughts in the comments down below!

Want to know more about the signs of a mature person? Check this video out below!