Why You Should Start Seeing Your Mistakes As Mirrors 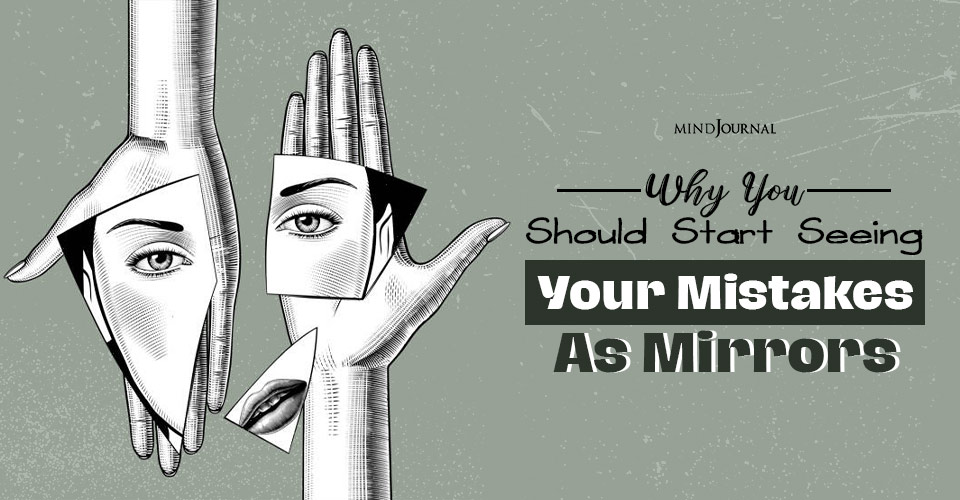 Start seeing your mistakes as mirrors “Wisdom comes from making mistakes, having the courage to face them, and make adjustments moving forward based upon the knowledge acquired through those experiences.” ― Ken Poirot

I recently listened to an Oprah’s SuperSoul Conversations podcast with writer Tracy McMillan. She said something early in the interview that caused me to pause mid-mascara application and gasp. As Oprah would say, it was an ah-ha moment.

In my mind, Tracy then dropped the mic and walked off set. Boom.

This concept that our relationships are a reflection of what’s going on inside us is not new to me. I’ve heard it before. But something about hearing it that morning was different. Call it awareness, as I’m in a very self-reflective phase of life. Or call it mindset, as we only truly hear things when we are ready to. Or maybe just chalk it up to timing, as I embark on the journey of attempting to open my heart to a new man.

Whatever the reason, this statement literally stopped me in my getting ready tracks.

Tracy continued, saying our relationships “mirror back our deepest, most unconscious beliefs about ourselves.”

Related: 10 Signs Of Self-Hatred And How To Overcome

That really got me thinking – what relationship was I having with myself during my tumultuous relationship years? What did I unconsciously believe about myself?

I know after failing at my first attempt at love, I became very guarded, not wanting to feel that pain again. That guard successfully kept everyone at an arm’s length. I so desperately wanted to feel a true connection again, but I just wouldn’t let anyone close enough.

At the time, I didn’t see it that way. I didn’t see that I was the cause of my deep-rooted loneliness. All I saw was he’s just not that into me, he didn’t choose me, no one wants me, and several other self-deprecating thoughts.

And so began the emergence of an underlying theme – I’m not good enough; I’m not worthy.

I’ve always viewed those years of my life as an aberration – a weird time when for some unknown reason I unexpectedly abandoned my values and lost all integrity. I mean, how could I not think that? Integrity is defined as a “firm adherence to a code of especially moral or artistic values.” Getting involved with a married man is by no means moral. The definition doesn’t allow for many ifs, ands, or buts.

I knew I never maliciously pursued the role of the other woman out of a desire to steal anyone away from their home. That wasn’t me. But I also did nothing to stop it. Maybe I allowed it to happen because I didn’t think I deserved better. Maybe I settled for an unacceptable situation because I wasn’t accepting of myself.

Riddled with shame, guilt, and pain from those years and those decisions, I went back into guarded mode. Only this time the wall was stronger, taller, thicker. So I guess it’s no surprise that my next relationship was with someone equally as emotionally unavailable.

Related: A 5-Step Guide To Escape The Guilt Trap

I dove heart-first into that relationship, gave it my all. Probably too much. Unaware of my own issues, all I saw were his. And I lost myself completely trying to make it work. Abandoned myself. And then he abandoned me.