A 5-Step Guide To Escape The Guilt Trap 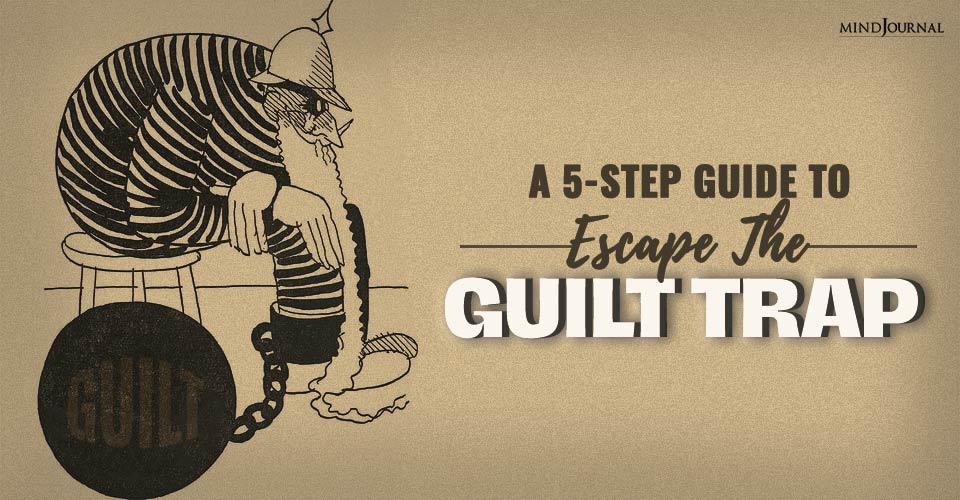 Whether it’s stealing a donut bit in our diet days or not calling our mon in her birthday, that is a no-brainer that guilt creates havoc in your mind, sometimes for a long time. Guilt trap; A self-imposed problem that appears when we think we are not living up to someone’s or own our expectations. While it’s tough to conquer, it’s kind of necessary to overcome guilt and cultivate self-forgiveness to maintain your self-esteem.

In theory, it might sound nice to put others first, but when guilt and obsessive obligation cloud personal needs, it’s easy to become last on your own list, and consequently, the hidden costs can be unending.

Under the spell of guilt and obligation, we may suppress expression, remain disempowered, and disregard the inner guidance that could otherwise lead us to joy. Moreover, if we are afraid to cause harm or inconvenience to others, guilt and obligation might trap us in jobs or relationships well past their expiration date.

Guilt is so emotionally debilitating that we’ll do almost anything to avoid it. Indeed, it’s much easier to say yes and avoid guilt, than suffer the consequences, and, if never-ending guilt is not enough to control our behavior, the after-effects of regret can haunt our memories for life.

No doubt, there’s a huge cost for playing the Guilt Game, and it’s a game that can never be won!

My mother was the queen of guilt, and she generously taught me everything she knew, and, in fact, I spent the first twenty-something years of my life trying to please her, and everyone else for that matter. But, it never worked, because it was impossible to meet every expectation, so no matter how much I tried, guilt had me under siege.

Year after year, it turned me into a phony people pleaser, but underneath the cloud of guilt, I was screaming to get out! With no exit strategy, I did my best to suppress resentment, stress, and overwhelming, but, when repercussions finally caught up, guilt manifested as chronic fatigue syndrome.

Although this gave me an excuse to say no to all the people I pleased, I still felt too guilty to put my needs first. By that point, it was perfectly clear that guilt would be my master until I learned to master guilt.

Indeed, I was right – once I understood the dynamics behind guilt and obligation, I took responsibility for the racket I was unconsciously running, and after that, it was surprisingly easy to escape the Guilt Trap once and for all!  And, if I can do it, you can too!

I offer the following as your “Get Out of Guilt-Free Card,” and I’m going to show you exactly how to use it!

Hidden Dynamics of the Guilt Trap

Like any trap, to escape the Guilt Trap, you must first understand how it operates, and then use this knowledge to free yourself. In fact, just by spotlighting the hidden dynamics, clarity can transform confusion into control, and the chains will begin to loosen.

Related: To The Man Feeling Too Guilty To Leave

The Origins of Guilt

In primitive times, if our tribes found us unworthy, it led to shame, abandonment, and often death, and this meant that worthiness was essential for survival. Since the ego is a survival program in the subconscious mind, its primary objective is to ensure worth (to prevent abandonment), and it does so by utilizing the Worthiness Program.

Although times have changed and survival is no longer dependent on worth, the Worthiness Program continues to operate, and, as a result, it motivates us toward “worth-producing behaviors” and away from “useless behaviors” that do not prove, protect or improve worth. And its’ two secret weapons are guilt and obligation.

The purpose of obligation is to motivate you to do whatever it takes to prove or maintain worth so that your modern-day tribe will provide approval and acceptance, and, therefore, not abandon you.

If you were to make a list of all your obligations, you might realize that most represent the specific conditions you must meet to be worthy, such as fulfilling roles, living up to expectations, being needed, demonstrating importance, etc…

Obligation tells you what to do, and guilt (or fear of impending guilt) ensures you follow through – just the thought of putting off your “to-do list” may be enough to induce painful bouts of guilt.

Guilt says, “Who do you think you are? How dare you choose yourself over others?”

Obligation and guilt are strange bedfellows and if one doesn’t get you, the other will. Even if you get away with shirking obligation, there’s a price for saying no.

Guilt is your judge and jury, and by nature of guilt, you’re guilty until proven innocent, and because guilt is the punishment and the Punisher, your fate is sealed and your sentence guaranteed.