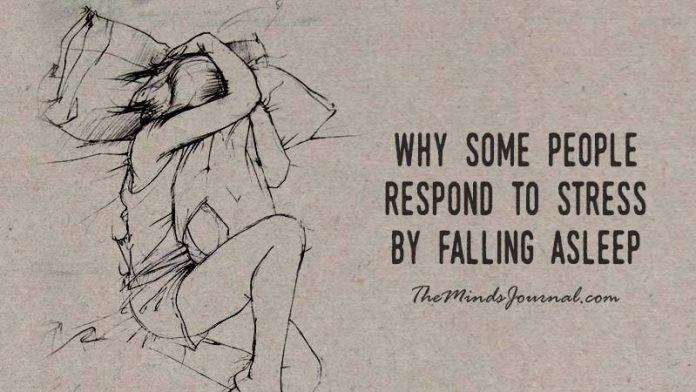 Why Some People Respond to Stress by Falling Asleep

Pinterest
Facebook
Linkedin
Twitter
ReddIt
Mix
Tumblr
WhatsApp
Email
Print
Last month, my wife and I found ourselves in a disagreement about whether or not our apartment was clean enough for guests—the type of medium-sized disagreement that likely plagues all close relationships. In the midst of it, there was a lull and, feeling exhausted all of a sudden, I got up and left the living room. In the bedroom, I immediately fell face down into the sheets. The next thing I knew it was 20 minutes later and my wife was shaking me awake. I hadn’t meant to fall asleep; I just felt so fatigued in that moment that there was nothing else I could do.

This wasn’t new for me. A few weeks earlier, I had come into conflict with an acquaintance over some money. We were exchanging tense emails while I was at my office, and I began to feel the slow oozing onset of sleep, the same tiredness that came on when, as a child, I rode in the backseat of the car on the way home from some undesired trip. A sleepiness that overtakes the body slowly but surely and feels entirely outside of your control.

Though this has happened many times before, my response to conflict still seems strange to me. After all, as everyone knows from 9th grade biology class, when faced with stress—an acute threat—our bodies enter fight-or-flight mode. It’s supposed to be automatic: the adrenal cortex releases stress hormones to put the body on alert; the heart begins to beat more rapidly; breathing increases frequency; your metabolism starts to speed up, and oxygen-rich blood gets pumped directly to the larger muscles in the body. The point is to become energized, to prepare to face the source of the conflict head on, or, at the worst, be ready to run away, at top speed.

Of course, you don’t actually want the stress response system to be too reactive. If you were constantly in fight or flight mode, constantly stressed, it could actually have long-term effects on your neurochemistry, leading to chronic anxiety, depression, and, well, more sleeplessness. Even so, it seems like a good idea to sometimes be on high alert when dealing with stressful situations.

But that’s not what my body did. My body shut down.

If, during early development, a living thing comes to understand that it is helpless, it will continue to perceive a lack of control, no matter if the context changes.

I asked around, and found out that many others experience the same thing. For example, Dawn, a family counselor in Columbus, Ohio, told me that her husband Brad often “starts yawning in the middle of heated discussions, and will even lie down and go right to sleep.” One time their toddler son fell down the stairs (he was fine), and Brad left the room and went to bed.  Brad has had this kind of stress response for all 24 years of their relationship; Dawn says she’s used to it by now.

There’s a concept in psychology called “learned helplessness” used to explain certain aspects of depression and anxiety. It’s fairly old, having been first recognized and codified in the 1970s, but has remained largely relevant and accepted within the field. The name (mostly) explains it all: If, at a very early stage in development, a living thing comes to understand that it is helpless in the face of the world’s forces, it will continue to perceive a lack of control, and therefore actually become helpless, no matter if the context changes.
In the early studies, dogs were divided into two groups: The first half were subjected to electric shocks, but were given a way to stop the shocks (they just had to figure it out themselves). The second group of dogs received shocks but had no way to avoid, escape, or stop them. The experience, sadly, had long-term effects on the animals. When faced with stressful environments later on in life, the first group of dogs did whatever they could to try to deal with it; the second group simply gave up. They had been conditioned to respond to stress with acquiescence.

Do you think your drunk self is different from your real self?
Read more
wpDiscuz
69
0
Would love your thoughts, please comment.x
()
x
| Reply