Why Men Pull Away When Falling In Love? 8 Possible Reasons 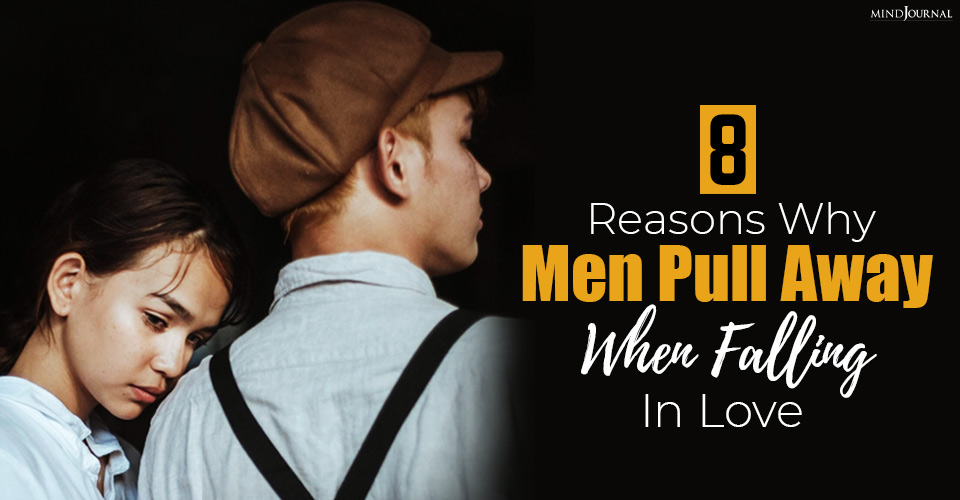 Things were going great and you could feel a genuine connection with him. You could feel he was the one. And you were sure he felt the same about you. And just when you opened your heart to him, he started withdrawing. But why? Why men pull away and grow distant just when things start getting serious? You’re confused and it’s driving you crazy. So let’s take a look at why guys pull away when they start falling in love and what you can do about it.

Wondering Men Pull Away When Falling In Love?

One minute a man can be happily courting you, calling you consistently, and acting as though your relationship is strong and will go the distance.

He might say he loves you or mention he’s falling for you. Suddenly, he becomes distant and withdrawn– which threatens the very foundation of your relationship. The next you’re terrified of losing him and wonder why it suddenly seems like he might leave you completely.

If your man has pulled back or asked for space, I know firsthand how heart-wrenching it can be. However, all hope is not lost, and it’s not always your fault if a man pulls away when things are going well.

Here Are 8 Possible Reasons Why He Pulls Away When Falling In Love:

1. He fears to lose his freedom.

As fun as it is to have someone to spend forever with, being with you might involve some lost opportunity costs that he’s not ready to give up yet.

Usually, this fear is totally subconscious, but it comes along with a more intense relationship. When a man feels as though your relationship might be “forever,” he can get spooked and start thinking about all of the things he will give up if he commits to you. As long as you don’t act like you’re trying to take away things that enjoy, usually, you can ride this one out.

Read: 3 Reasons Why Men Pull Away: Why A Guy Might Say He Needs Space

2. He’s simply not the marrying kind.

“Sometimes the heart sees what is invisible to the eye.” – H. Jackson Brown, Jr.

If he says he doesn’t want to get married, for goodness sake, BELIEVE HIM.

Trying to get a man to marry you who doesn’t want to get married is a lesson in futility.

If you really want to get married, you owe it to yourself to move on.

3. You have incompatible life goals and/or beliefs.

People are most often willing to compromise on the little things. However, if you clash on big things like where you want to live, whether or not you want children and how many, religion, what kind of lifestyle you want to live together, these differences may be impossible to overcome.

He might be perfectly happy with short-term dating under these circumstances but feel reluctant to completely merge your lives together.

If you know there are underlying serious problems with compatibility in your relationship, you owe it to yourself to stop trying to tell yourself that something will change, someone will bend, or it will all work out. Don’t gloss over these big things because they do not go away after you tie the knot. If anything, the resentment of compromise from either of you can poison your bond over time.

4. He doesn’t feel settled or happy with his career or future.

Men worry about their careers and purpose a great deal, and tend to be one-track-minded about them. If he’s having trouble at work or struggling to find his purpose, he might pull away from your relationship to deal with it.

One of the biggest mistakes women make with men is pushing for more of a man’s time and attention when he is having work issues. Men tend to use their career success as an underpinning for confidence in other areas of their lives. Success starts with work and purpose and moves outward. If he doesn’t feel confident at work, this will bleed into your relationship.

That’s why it’s so crucial for a man to feel successful before he deals with you. Beware the man who is struggling with his work and purpose.

Usually, women lean on their partners for support when they are struggling with their relationships– but it isn’t the same for men.

If your man already feels like he’s failing at work, adding relationship pressure can be the straw that breaks the camel’s back. Pressuring him for more attention will most likely cause him to pull away from you or remove himself from your relationship completely while he tries to get his life together.

“The thing about loving someone is that you have to love them the way they need to be loved and not the way you want to love them.” – Karrine Steffans

Read: 5 Reasons Why Your Man Is Withdrawing And What You Can Do

5. You’ve been worrying too much about how things are getting serious.

If you eventually want to get married, he most likely knows that you’re interested in a commitment. He might not be ready for that just yet.

Sitting back and enjoying the ride can be a difficult thing if you’re concerned with combining a family and/or having children. Usually, women think about a relationship’s future much more often than a man does. The guy will be there enjoying the afternoon with a woman and she’ll secretly be fantasizing about wedding china patterns.

Even if you have never told him about it, he might feel pressure from you anyway. The best way to deal with this is to choose a man who eventually wants to get married in the first place, then not pressure him for anything. He will stop backing away when he stops feeling pressured about doing more.

6. He simply needs a break from all of the intense emotions.

Falling in love is amazing. However, men don’t really live in their emotional world as often as women do.

They tend to dip in and out, experiencing intense emotion and then pulling back. That’s why after a really intense weekend or set of dates, suddenly a guy will withdraw. It isn’t because he doesn’t love you, it’s because he has to focus on other things for a while to get back to the emotional center.

When you get married, you’re not just marrying him, you’re marrying his family.

The prospect of combining your tribes becomes even more daunting if there is trouble between you and his family or he doesn’t get along with your people.

Sometimes men will drag their heels on furthering their relationship to a woman who just doesn’t fit into the family picture, even though he may love you.

8. You’re not the one for him long term.

When you’re falling in love with a man, nothing stings more than the possibility that he just might not feel the same way about you.

Remember, this doesn’t ever, EVER mean there is anything wrong with you. It simply means that while you’re dating, 99% of relationships just aren’t built to go the distance.

He might be content keeping your bond casual. If you don’t want a casual relationship, it’s up to you to speak up, otherwise, he’ll think that you’re happy with what you’re currently doing. He’s not a mind reader.

Also: You can’t pretzel-twist yourself into what he wants in the hope he’ll want you. It’s never going to work and you’ll only hurt yourself in the process of trying to gain his approval.

Read: Why Your Man Always Seems To ‘Shut Down’ During An Argument

What To Do When He Pulls Away When Falling In Love

“Loving someone meant letting them be who they were, not caging them.” – Melissa Marr

When a guy pulls away, it tends to thrust us straight into panic mode.

It’s really hard to avoid becoming reactive and stop trying to DO THINGS to make him go back to the way things were before he became distant.

The problem is, as much as you might want to jar him back to reality, you can’t logically convince a man to be attracted to you and the relationship.

That’s why the answer is to lovingly give him time and space.

In the short term, you might be able to nag him into giving you more of his time, but that is a short-term victory since if he’s pulling away, chasing him will make him run faster and further away from you.

The only solution that works long-term is to let him work out his issues and simply tend to your own life and hobbies while he figures things out.

Are you frustrated by a man who is ignoring your calls or is taking you for granted?

Do you wish your man was more attentive, loving, and caring?

Here’s an interesting video that can provide some additional help in understanding why he is withdrawing:

“When you faithfully love someone with all your heart and give it your all without getting anything in return. Good things will come for you and true love will find you.” – Diana Vim

It is not exactly the easiest thing to understand why a man pulls away when falling in love. It’s like a Rubik’s cube that you just can’t solve. So it’s important that you look at the available facts, focus on the warning signs and try to put it back in place one step at a time. If you panic and demand answers from him then things might go downhill real fast. In fact you might push him further away.

So the first thing you need to do is make sure if he is actually pulling back or going through some personal issues or if he is genuinely busy. Worrying excessively will not only damage your relationship but also affect you emotionally and psychologically. You don’t want to be knee deep in stress and anxiety right now. So give yourself some time and focus on your own healing first. Once you’re sure he’s pulling away, take a step back, give him the space he needs, focus on your priorities and see what happens.

You just might be pleasantly surprised by the outcome. So use the expert advice and information given above and take your time to figure it out.

Written by Elizabeth Stone
Originally appeared in Attract The One