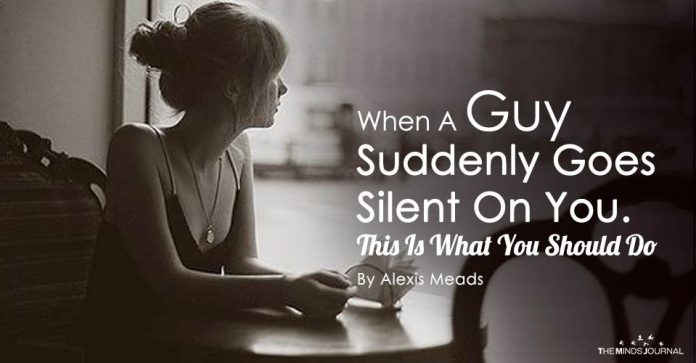 When A Guy Suddenly Goes Silent On You: This Is What You Should Do

You’ve been seeing a new man that you’re really into, and you feel the familiar feeling that comes with getting your hopes up. You actually even allow yourself to be excited about him!

And then, the most crushing blow of all happens. He goes radio silent.

You stare at your phone, praying that he will text or call, jumping at every notification.

I know how it feels, beautiful.

You’re left questioning yourself. Wondering what you did wrong, what you might have said or shouldn’t have said, whether you should’ve just slept with him instead of holding off. Or worse, maybe you just weren’t good enough? Pretty enough? Skinny enough?

It leaves you in a downward spiral, thinking, “how can I be here again?”

You have no idea what to do.

My goal is to help you date from the most empowered place possible. A place where you have worth. You have a voice. You get to do the choosing.

When you don’t hear from a man, I know it can feel like you’re doing anything but choosing, but you do still have a choice.

First, out of these two scenarios, which does your guy fall into?

A man you’ve only been on a couple of dates with.

Or, the most amazing guy ever where things were progressing really nicely and you’ve been seeing each other regularly.

If it was a guy that you went on just one or two dates with, then the only thing to do is this: move on.

I know it can be tough, but it’s really that simple.

If on the other hand he was the most amazing guy and you thought you were on the road to meeting his parents, then you have to decide if he’s emotionally available or unavailable.

If you believe that he was indeed emotionally available, then it’s up to you to take responsibility, have courage, and have an honest conversation with him to see what is going on between you two. A powerful, alluring woman knows her worth and knows that she is not flawed.

Alexis Meadshttps://alexismeads.com
Alexis Meads is a Harvard educated Professional Life and Dating Coach who specializes in helping women to find love and date with intention. She has worked with hundreds of clients from around the world since 2012, coached Tony Robbins clients, and been featured on MariaShriver.com, Huffington Post, KATU News and more. Like this article? Get her FREE gift at www.alexismeads.com/gift
-Adverts-