Why Your Anxiety Makes Relationships And Dating So Hard 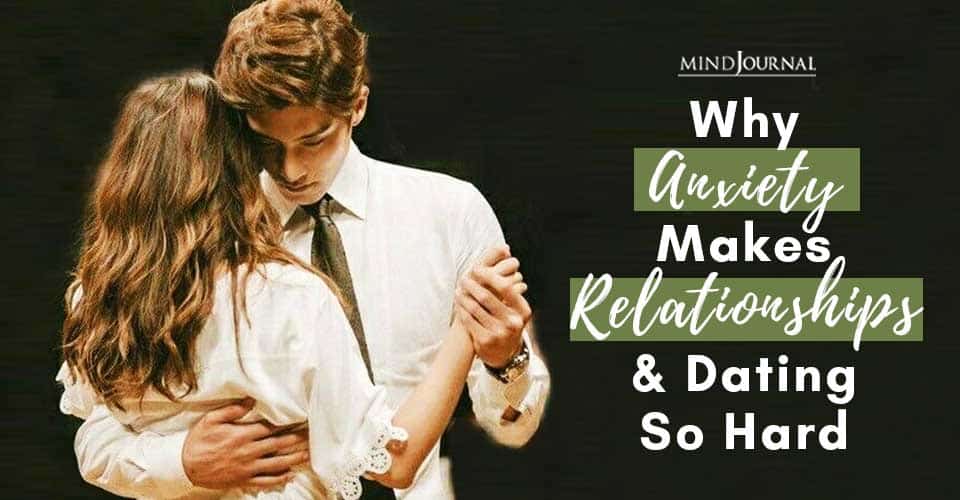 Anxiety and relationships sometimes can be a challenge to handle at the same time. Anxious people tend to have a harder time in relationships than others.

It’s staying up at night and tossing and turning because you wonder how someone feels. It’s questioning if this is really something or is it all in your head.

Anxiety is being excited about a date but thinking they’ll cancel last minute. It’s staring at your phone waiting for it.

It’s every past relationship on repeat and hoping this one doesn’t end the same way.

It’s an ending that emotionally destroys you. It’s trying to handle it with grace and dignity but at the same time, you’re in tears wondering, when things changed and what you did wrong.

It’s beating yourself up for it, even when you’re friends tell you, it was him not you.

Anxiety tells you, ‘no, it’s not that they were the wrong person, it’s that you’re flawed and not good enough.’ And you look at yourself fixating on things you wish you could change because that’s probably why it didn’t work out. Anxiety is striving for perfection even if it kills you.

Anxiety is every text and not wanting to be the first one to send it.

It’s stressing how to word something properly because you care but you don’t want to come on too strong.

Related: Reasons Why People With Anxiety Are The Best People To Fall In Love With

It’s the agony of waiting for a response as reread what you just said. It’s wanting to send a double text but knowing you shouldn’t

It’s social media adding to it and making it 10X worse. It’s never just a like or a view or a share because you’re staring at your phone wondering if it means something more.

Anxiety tells you, ‘they’re ignoring you on purpose. They don’t care. They are going to leave. They’re mad at you.’

Anxiety is believing lies made up in your own head.

It’s the weight lifted off your chest when they respond but you still worry.

It’s wondering at any moment, ‘are they going to change their mind about me?’ It’s playing out that scenario in your head, just so you’re ready for how you’d respond to it.

Anxiety is anticipating the worst in people, even though you have the best intentions. It’s caring but the insecurity of caring too much.

It’s questioning and doubting, everything someone thinks, says and does.

It’s finally getting a relationship but you’re paralyzed with fear of it ending, even though it just started.

Anxiety is pushing people away because you think it’s for their own good.

It’s is being everywhere on time and needing your partner to be the same way. It’s wanting things to go according to the original plan and getting upset when it doesn’t.

It’s messing up and making a mistake and your immediate assumption is, they’re going to leave or dump you. It’s being unbelievably hard on yourself even though you’re the least judgemental person ever.