10 Unforgettable ‘To Kill a Mockingbird’ Quotes That Still Hold True 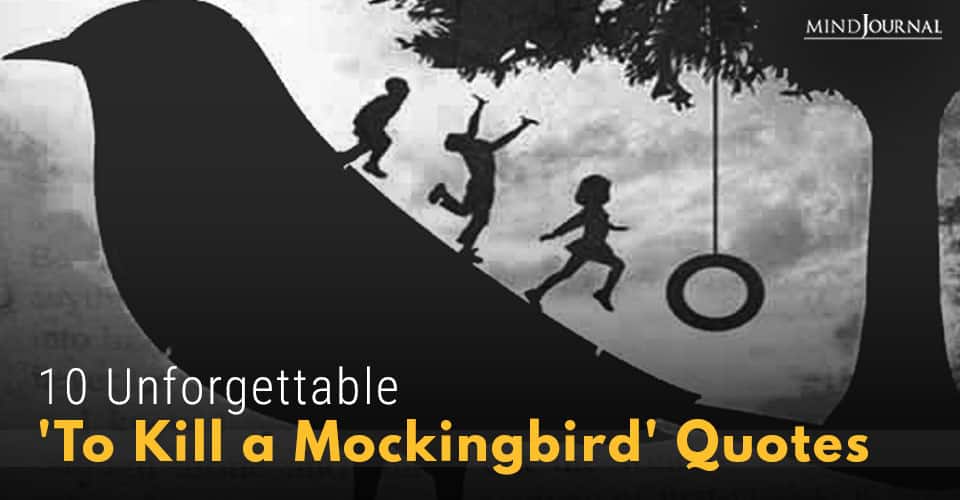 Unforgettable ‘To Kill a Mockingbird’ Quotes That Still Hold True

If you’ve read this classic by Harper Lee you know for a fact that it is one worth remembering. If you haven’t, you’re missing out big time. But we’ve got you covered with the most priceless gems you can extract from this literary masterpiece. So, we won’t be giving out any spoilers for those who haven’t read ‘To Kill A Mockingbird’ by Harper Lee, but we’re just going to highlight some of the most thought-provoking quotes from this goldmine of wisdom.

No matter where you are in this journey we call life, we all have lessons to learn, re-learn and unlearn. The lessons we choose are the ones that define and mold us to become the people that we are.

Related: Much like the quotes from ‘To Kill a Mockingbird’, there are some excellent books that can challenge how you see the world and completely alter the way you perceive it. Here are 25 Best Nonfiction Books That Will Change Your Perception Of Reality.

Without further ado, we present to you the most Unforgettable ‘To Kill a Mockingbird’ Quotes That Still Hold True:

1.Scout: “Atticus, he was real nice.”
Atticus: “Most people are, Scout, when you finally see them.”

2. Real courage is when you know you’re licked before you begin, but you begin anyway and see it through no matter what.

4. They’re certainly entitled to think that, and they’re entitled to full respect for their opinions… but before I can live with other folks I’ve got to live with myself. The one thing that doesn’t abide by majority rule is a person’s conscience.

5. Atticus told me to delete the adjectives and I’d have the facts.

6. The one thing that doesn’t abide by majority rule is a person’s conscience.

7. People generally see what they look for, and hear what they listen for.

8. “I wanted you to see what real courage is, instead of getting the idea that courage is a man with a gun in his hand. It’s when you know you’re licked before you begin, but you begin anyway and see it through no matter what.” – Atticus Finch

9. Until I feared I would lose it, I never loved to read. One does not love breathing.

10. You never really understand a person until you consider things from his point of view… Until you climb inside of his skin and walk around in it.