3 Questions To Ask Your Partner Before Marriage 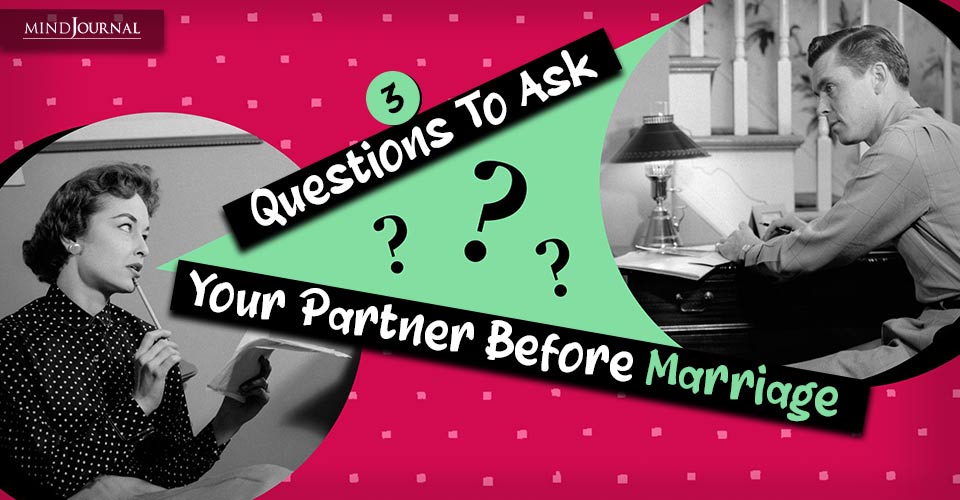 Marriage is a big step, there are a lot of things to think about before you say “I do.” Not sure where to begin? Here are some questions to ask before marriage. Consider asking these marriage questions before marrying your partner.

When I was a teenager, I learned that three other men, in addition to my dad, had proposed to my mom. She turned them down. At the time, this was a real surprise to me. Multiple marriage proposals brought to mind Scarlett O’Hara flirtatiously holding court on the front porch at Tara – not my straight-ahead mother. I imagined that my dad must have really swept her off her feet.

One day I asked her, “What made you say yes to Dad?” I was expecting a story of head-spinning romance. Instead, she said, “Well, I knew he was someone I could figure things out with.” At the time the answer fell flat. How boring! But now, many years into my own marriage, and having sat court-side to many marriages in my work as a couples therapist, I see that her answer was profound.

Life is essentially one long problem solving exercise, so the person you choose to partner with better be someone who can help you figure things out. Here are three questions to ask yourself before you decide if you want to spent the rest of your life figuring things out with this person.

3 Questions To Ask Before Marriage

1. Is This Person’s Happiness And Growth As Important To Me As My Own? (And Is The Opposite Also True?)

As much progress as has been made around gender roles and expectations in recent years, it is still true that women are typically socialized to put everyone else’s happiness above their own. At the same time men are taught that as long as they fulfill their role as the provider, everything else will fall into place. The cracks in this particular arrangement often don’t show until years in, with one person seething and the other bewildered. Both feeling like the wronged party because they had held up their part of the bargain.

We are each responsible for our own happiness and growth, both personally and professionally. Blaming your partner that you never reached your potential professionally or had the life you’d hoped for is an excuse. That said, the best partner on the marriage journey is someone who is invested in your success and happiness and you in theirs. This requires a lot more talking and compromise than a marriage following the old gender norms did, but this new paradigm leads to a dynamic, connected and fulfilling relationship.

Related: 10 Upfront Conversations Before Getting Married

2. Do We Share Expectations About What Our Life Together Will Be?

This is an obvious one, but it is shocking how often big issues, often around money, family and sex, are ignored until after life commitments have been made. When we’re first falling in love, we focus and delight in what we have in common. Differences recede into the background and are minimized. Once we get to know each other better, the difference surge forward, demanding to be dealt with.

What do you expect your life and relationship to look like in 5 years? How about 10? If you had envisioned moving closer to family after having kids, but your spouse swears she will die in the city you live in now, what are you going to do about that? Is being in a relationship with this person worth it to you to make this compromise? If so, what are the two of you going to do as a couple to make this work for both of you? What will you get in return? Marriages are built on these agreements. If you and your partner are feeling stuck around these issues, couples counseling can help enormously.