This Is How You Deserve To Be Pursued 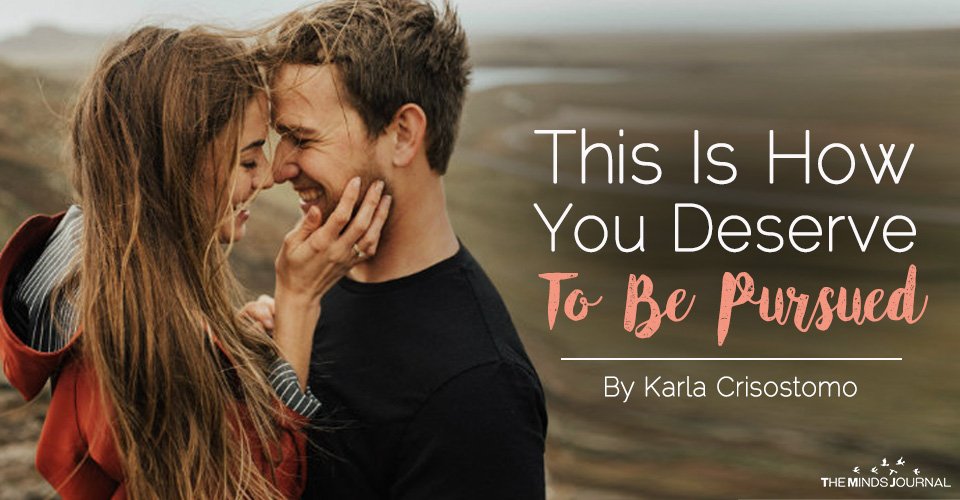 In an era of facile, just-for-fun dating and mutual swipe-rights, you still deserve to be pursued with pure intentions through thorough, effortful means.

1) You deserve to know the truth directly from him before he even courts you.

The man who seriously wants you will have confessed his feelings for you by the time he takes action to pursue you. He will surprise you with that damn truth in your most clueless state. He will brave the most difficult part because that is the right way to begin. He won’t do it gradually and confusingly. He won’t send you mixed signals and let you wait for him to confirm. No matter what your reaction could be, he will admit it to you firsthand and first of all. He will tell it to you face-to-face.

2) You deserve to be pursued through effortful creativity and resourcefulness.

The man who seriously wants you doesn’t just text you sweet, flirty messages full of heart emojis. He also writes you short poems regardless of how awkward they may sound. He practices sketching a portrait of you to be enclosed with handwritten letters because he knows you don’t deserve mere, withering flowers and chocolates that could just be stolen by your friends. He wants his presence to be lasting and unique—made especially for you. He would rather cook for you instead of taking you out for a typical romantic dinner because watching cooking shows on YouTube, doing the grocery, chopping and mincing ingredients count as effort. Conspicuous effort.

Read : You Deserve Better Than A Love You Have To Convince

3) You deserve to be waited for, not rushed.

The man who seriously wants you will not make you feel like he’s just competing with time. He will not make you feel like his love for you has a deadline. In fact, he is willing for his love to be tested by time. He is willing to wrestle against the temptation of giving up. He wants to prove he can patiently wait for your eyes though it may take months or even years. Because the man who wants you has that timeless love and so he respects your decisions. He respects what you feel towards him even if it’s barely similar with what he feels for you. He will just patiently wait until the feelings become mutual.

4) You deserve to be visited at home even when your parents or the whole family is around.

The man who seriously wants you visits you and your family, not for your body. He wants to win not just your heart but also theirs. He is not afraid of their criticisms because he knows he can prove his chivalrous intentions. He also courts your family because he aims for their blessing to your potential relationship.

5) You deserve to be pursued for lifetime love and not for temporary lust.

The man who seriously wants you does not want to gain you for lust or any other form of personal gratification. He wants you not just for your physical beauty but for your very soul that he wishes to take care of for the rest of his life. He wants to commit to you and be there for you through the roller coaster of life. He wants to share his life with you through the deepest, unforgettable moments—physically or abstractly. He aims to bring you to the altar. He aims not to be your sex partner but to be your husband and build a wonderful family with you.

6) You deserve to be prayed for.

The man who seriously wants you will do everything out of his own efforts but still clings to God’s guidance and will. He believes that the only way he can get to you is through Him. He believes in His timing. He knows that you are not an easy woman because you are God’s precious daughter and so he knows that only a suiting man who doesn’t fall short of His standards can win you. He will then try his best to reach those standards by asking for wisdom. This man who prays for you builds the truest love for you because it’s founded on faith and purity. And that’s the one you deserve.

Remember all of this, darling. You are a precious diamond.

You are not made just to be hurt by a selfish, temporary man.