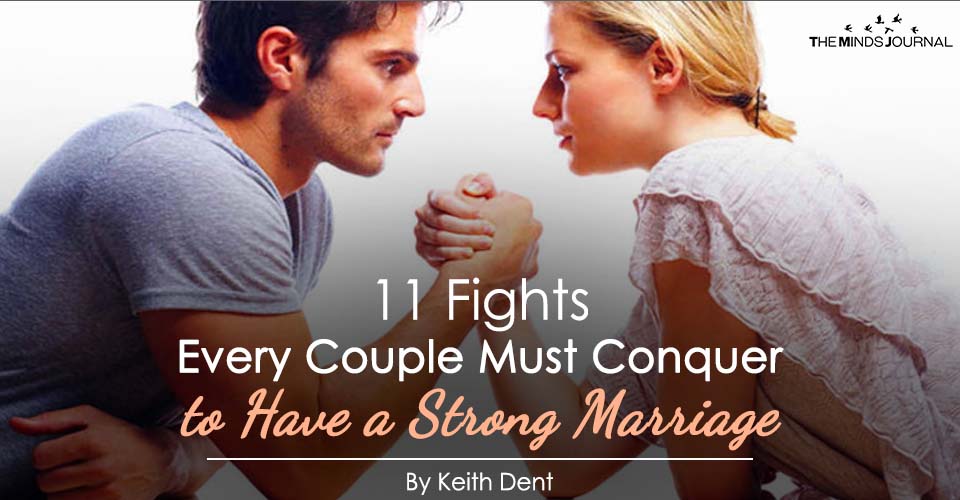 When you’re in the honeymoon phase of your marriage there is no argument that will derail your love because the feelings are so intense and the connection is so passionate.

If you are fortunate enough to get through the honeymoon phase as most married couples do, there are 11 arguments that almost every marriage goes through if you want to last.

1) The What are You Doing Fight?

This is probably the first fight you will have after the honeymoon phase. This is the fight were the intense love has worn off and the idiosyncracies of your partner starts to wear on your nerves.

2) The Proving Your Right Fight!

This type of fight starts when each couple’s views on the relationship from their own point-of-view. Each person will expend tremendous amounts of energy making sure their point is heard, but usually, nothing gets resolved.

3) The You’re Nagging and I’m not listening Fight.

The type of fight occurs when a “What Are You Doing?” Fight goes unresolved. The frustrated partner then ramps up the emotions to the point where the other partner tends to ignore it.

4) The When are You Going To Do The( Insert Chore Here) Fight!

When household responsibilities that were once 50/50 in a relationship have now become one-sided. This fight is usually an undercurrent of what is really going on. It’s about the expectations of the relationship and feeling appreciated.

5) The He/She Better Do Right By My Birthday Fight!

When the special time to show appreciation turns into the same old boring celebration. This fight usually occurs because no matter what, Partner B does, he/she will never meet the expectations of Partner A.

7) The You Don’t Care About Me Fight!

When a fight falls on deaf ears and Partner A feels that Partner B doesn’t care enough to do anything to change it.

When your personality differences become a problem when it comes to raising your kids.

When the an individuals thoughts and priorities about money aren’t discussed and agreed upon.

When the anger, arguing and acrimony about sex turns into an argument.

When you don’t have a plan on how you will interact with each other’s families affects your relationship.

In order to conquer any of these 11 arguments, you have to work at figuring out what is the core issue you are mad about and communicating it to your partner so you can have to marriage journey that you want.

Written by Coach Keith Dent
Originally appeared on StriveTwoSucceedWordpress.com
You may also like

iLOVESTRONG coach Keith works with individuals and couples to help them achieve the kind of relationship they envisioned when they first made their commitment to love. Strengthening communication and revitalizing their understanding and empathy for each other helps couples regain the romance and closeness they long for even in their everyday “real” world. Having a coach is like having a GPS for life. Keith can help you get a realistic picture of where you are and focus on the best path forward toward your goals. Unlike counseling, iLOVESTRONG focuses on the future, not the past. I'm the author of a new book In the Paint - How to Win at the Game of Love.View Author posts