It’s hard to imagine that any one of us has never wondered how it’s possible to have a truly happy marriage. I know I’ve heard women talk about it constantly, but when I think about it, I’ve seldom heard men, let alone married men, discuss this particular dilemma of modern love.

Sometimes I find myself looking at couples of a certain age walking down the street, holding hands and chirping to each other happily, and ask myself “What’s their secret?”

Because let’s be real, it doesn’t take much experience in the world of love and dating to understand just how hard having a successful marriage is for pretty much everyone.

I mean, even as an idea, the whole concept of marriage is kind of insane. You agree that you will be intimate with one person and one person only until one of you dies. I have had boyfriends I’ve wanted to kill when we’ve spent more than an hour together. A lifetime of marriage? Yeah, I don’t think so.

It’s not like I don’t know those good marriages can and do happen all the time!

I come from parents who have been happily and successfully married for well over 30 years, so I’ve seen it with my own eyes. But here’s the thing about relationships like theirs — we don’t hear a lot about them, at least, not from the people inside of them, because people in the happy marriage don’t have many issues they feel the need to take to their friends or co-workers for dissection or advice.

And when you do hear people talk about the keys for success to a happy marriage, it’s usually the female half of the couple speaking. After all, our society basically expects it to be every woman’s job to be the one responsible for any and all conversing that has to take place about love, communication, and intimacy.

While it’s true that some women do feel more comfortable than men when it comes to talking about what makes their marriage successful, that doesn’t mean that plenty of men out there don’t have their own meaningful take on the subject.

In the past, I’ve considered asking my dad what makes his marriage to my mom successful, but I’m kind of terrified that his answer will be sexual and there’s just no coming back from something like that, so instead I turned to Reddit to see what the guys on the AskMen subreddit have to say on the subject.

Sure enough, this question had already been asked:

“Old men of Reddit: What was the key to your successful marriage?

*Edit: Thanks for the gold kind stranger! And yes, maybe I should have mentioned, I’m getting married in two months. Many wise words here, thanks to all of you who shared!”

You’ll be surprised, entertained, and impressed when you hear what these married revealed as their 21 secrets for how to have a happy, successful marriage.

“When arguing with your SO, the goal isn’t to win the argument. The goal is to solve a problem.”

2.  Be complete people as individuals.

“The strongest relationships come from two strong, happy individuals coming together, not two broken individuals relying on each other for happiness.”

“Be creative. Any idiot can throw himself at your wife and worship her. That means nothing. Instead, use your creativity to find new ways to make her life better in ways she could not have thought of. Examples: My wife has trouble falling asleep because of her mind races. I’ve got an encyclopedic knowledge of old computer games. So every night when we go to bed, I play old, slightly repetitive video games while she watches. The games I choose are just boring enough that she falls asleep, with her last thoughts usually being about fairies and elves and such. She’s out like a light every night now.”

“That’s the one thing that I’ve learned from my parents’ 34-year marriage. They never prioritized their kids over their relationship. The marriage came first. Always.”

“Always remember that what you do should be to enhance the marriage and your partnership, and not necessarily for yourself. That might be not spending money on yourself, or moving across the country for her job, or picking a location so one person has an easier commute.”

6.  Respect your wife and your marriage, even if it means passing up a “good” joke.

“Don’t ever, ever take jabs at her/the marriage in public. No ‘ball and chain’ jokes, etc.”

“Her corner is your corner. Period. Even if she’s batsh*t crazy wrong, and she will be. Give her your input, try and give her your advice, but there will come days that no matter what you say, she’s going to put the car towards the edge of the cliff and drive that sumb*tch right off. When those days come, you buckle your seatbelt, you reach out to take her hand, and you go for the ride.”

“Learn to cook. It’s not that hard, you can have fun with it, and few things will make you happier than your spouse asking you to make that one dinner that she loves.”

“During rough times, and you’ll have them, agree that you are in this thing for the long haul and you fully expect to stick it out and make it through to the next round of good times. Say it out loud. Make it known.”

11.  Check in with each other every day.

“When everyone gets home at the end of the day, ask ‘How was your day?’ Let them vent. When they’re done, they should know to ask you the same, so you can vent. Do this without fail.”

12.  Let her vent just for the sake of venting.

“When they (women) talk about a problem/issue they are having, do not suggest fixes at first. Just let them vent, suggestion time comes later. Guys like to fix things and don’t discuss problems with guys unless they’re seeking advice. Women want empathy and commiseration first, then they’ll want to discuss solutions.”

“Don’t cheat, ever; train your brain to shut off attraction to other people [EDIT: Clarified below] and don’t put yourself in a position to slip. Don’t even come close to flirting with other people. If going out to lunch with the platonic friend of opposite-sex, casually tell spouse in advance, not to ask permission but to show respect. Don’t lie about what you are doing.”

“Save money so your later years are easier. Don’t piss money away on stupid stuff. Put all money, from whatever source, in one pot and talk about how you are spending it (IMO there should be no ‘my’ or ‘your’ money when married). MAX OUT YOUR IRA/401(k) from the beginning.”

“Don’t insult one another. Give on little things. if she wants you to wear a tie and you don’t want to, just wear the damn thing.”

16.  Be generous with signs of affection.

“Cuddle without sex sometimes. Hug her a lot. Kiss her on the neck out of the blue when she is cooking something. Tell her you to love her more than you think you should.”

“Finally, be buddies. Romance and sex and dates are nice, but really, be best friends. Shoot the shit. Flirt. Wink at each other. Banter. It really makes things fun and easy and awesome. Marriage, with effort and the right person, is incredible.”

18.  Remember that she is important.

“She is important. I originally wrote, ‘make her feel important’. Then, I changed it to, ‘make her important’. I think that statement, though, best guides you on the course of action you need to take: she is important. When you come home and she is telling you about your day, get off your phone, stop staring at the computer screen, put down what you’re doing and listen to her. Make sure she is acutely aware that for as long as she is talking to you, she is the only thing in your universe — look her in the eye, nod along, ask follow-up questions. If it’s date night, leave the phone at home. Don’t interrupt her when she’s talking. Do things for her that require effort. Sometimes, relationships get to be this zero-sum game where you’re putting points up on the board, and in those situations, we go for the easy sh*t. How much effort, really and truly, did it take you to buy a bouquet of flowers at Trader Joe’s while you were there anyhow buying spaghetti sauce for dinner? Not saying don’t buy flowers, but when you spend your Saturday sweating through your clothes doing something just for her, I’ve never met a decent woman alive that didn’t see you doing it and appreciate the work. So many of my friends treat their spouses like after-thoughts. Even after years, you have to find ways, every day, to say to her, ‘You are important to me.’ That’s one I’ve discovered recently, and I wish I had learned it early because it’s paid dividends out the ass since I started making it a focus.”

“Make sure you get plenty of time apart, time for yourself. Schedule Guys Nights. Take up hobbies and stay active in them. You are a person, not some f**ked-up siamese twin. For your sanity, to quell resentment and impatience, to soothe irritations, just get the fuck away from each other sometimes.”

“Never kiss her half-assed. I think ‘don’t do anything half-assed’ is some grade A solid wisdom, but if you’re gonna’ half-ass something, kissing your wife is the dead rock bottom of that list. If you’re gonna’ kiss her, do it right, with all of you, with your hands and your arms. Do it like you mean it, every single time, not for the sake of anything else save the simple fact that a kiss between you and your wife is the simplest way to say you love her, and you refuse to love her lazy.”

21.  Make one vital decision before you even start — to marry the right person.

“My spouse and I have been together almost a decade now, through some intense Lifetime movie of the week stuff, and we’re still swingin’. I owe a lot of that to her; I like to think of myself like some more handsome Confuscious the older I get, but the truth is, we would have never gotten to where we are now, with me armed with the tiny bits of wisdom I’ve summoned, if not for her infinite f**king patience. So, I suppose, my first bit of advice would be to get lucky and hook a good one, who’s willing to put up with your bullsh*t while you grow up and learn to be a man.”

All Successful Relationships Are Successful For These Same Exact 13 Habits

15 Things to Give up, to Get More from a Relationship 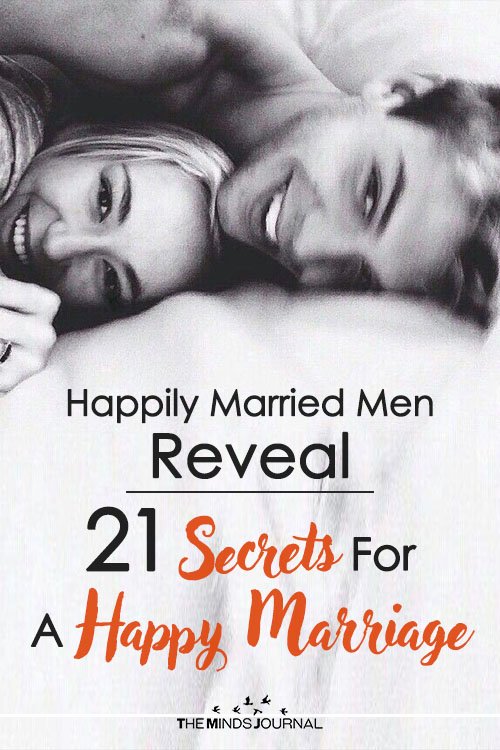