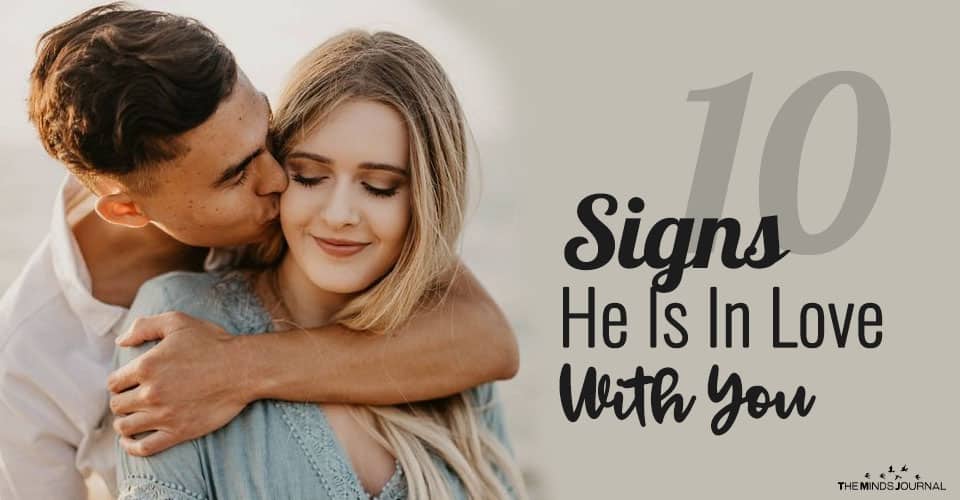 When it comes to love, have you ever looked out for the signs that the man you love also loves you?

A lot of us have ideas about what love should look like, how it should be, and how it should feel. A lot of the time these ideas are plain wrong (we can thank romantic comedies for that).

Because of that, some of us might not recognize the real thing when it comes our way. Maybe it’s because of these grand visions of love that have been implanted in our minds, but it could also be the result of being burned too many times in the past and having walls up when it comes to either giving love or being able to receive it.

The point is, love is a tricky thing. A guy can say he loves you and not truly mean it, and a guy can love you a lot but not be ready to say it.

1. He treats you with respect

When a man is in love with a woman, he respects her. He cares about the details of her life. He treats her well. If your guy values your opinions, compliments your character, celebrates your accomplishments, pays attention to details, and even accommodates your quirky habits — He stocks the fridge with Diet Coke even though he can’t stand the stuff, for example — you’ve got a keeper who’s falling fast and hard for you.

Does your partner respect you? Read 4 Ways To Restore Respect in a Relationship

2. You’re always on his mind

Does he send you funny texts during the day? Do songs, signs and hilarious headlines remind him of you? Does he Google last night’s unresolved debate — “Which is healthier: ice cream or gelato?” — when he’s at work? When you become a very present part of his day even when you’re apart, he’s invested in the relationship.

Love can soften the heart. Being right isn’t as important as doing right by the other person. When your beau starts to meet you in the middle on topics he’s typically stubborn about — Maybe he’s a movie snob suddenly willing to let you pick a flick he’d otherwise never watch — he’s leading with his heart instead of his head. Signs of selflessness are huge indicators that he’s in love with.

4. He touches you in public

Most guys have no qualms about touching their girlfriends in private. With public displays of affection, however, they can be a little more hesitant. When your man puts his arm around you in public, he’s both proudly announcing to the world that you’re together and making a protective gesture. Another love gesture: when he starts offering the hugs and cuddles you crave, with no expectation of sex. He wants to serve you with physical touch, not use it just to get what he wants.

5. He wants to take care of you

How do you know he cares for you? Read 26 Subtle Ways to Show Someone You Care

6. He wants you to love his family

Does he want you to meet everyone who’s important to him? When he’s ready to introduce you to people who matter most — and is equally eager to meet your friends and family — he has no intention of going anywhere. He’s proud to be with you and wants his family to fall in love with you, too.

7. He’s not afraid to fight — or apologize

Sometimes it takes a fight or two to understand just how strong a relationship is. A man in love is one who isn’t afraid of conflict — or apologies. Instead, he fights fair, respects you when things get rocky, listens to your perspective, hates to see you upset, and wants to resolve things well. “Love means never having to say you’re sorry” is the most inaccurate movie tagline ever. (Sorry, “Love Story.”)  Love means dropping the pride, admitting when you’re wrong and never being afraid to say you’re sorry.

Listen to his word choices. When he starts using words like “we,” “us,” and “Team Awesome” — Each guy will have his own way to describe the unit you’ve become — he’s not thinking of himself as a single man anymore. You’re now part of his life. And he loves that.

9. When he talks about the future, you’re in it

Does he make plans for the future that include you? Did he invite you to his buddy’s wedding next fall? Does he joke about your future children together? When he’s got a future with you on his mind, he’s already decided that he has no intention of letting you go.

If he says he loves you, believe him. A man in love can’t keep it to himself for long.

Love is a beautiful and intense thing to experience, and everyone deserves to have it in their lives. If the man you love still hasn’t said those three words, then look for these signs and they will tell you that he is in love with you.

If you want to know more about the signs that a man loves you, watch this video below: