Why We See The Worst In Other People 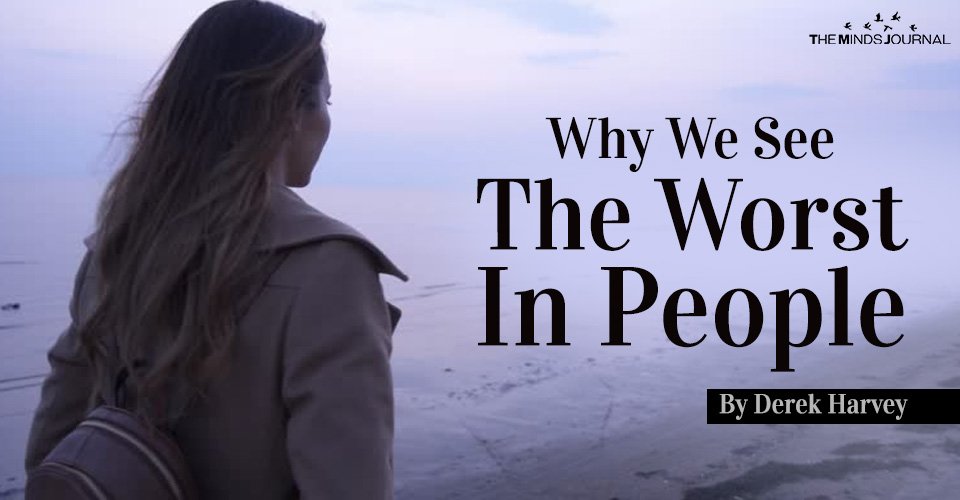 Why do we always focus on the worst in other while we see none in ourselves?

Growing up in the South, my Father introduced me to hunting at a young age. We would go out to our family farm every year during deer season. While in the deer blind early in the cold morning my Dad would say, “Keep your eyes out and look for anything that moves.”

If I just stared blankly out at the treetops and tree limbs, I probably wouldn’t notice anything. Since none of the trees had leaves on them, brown deer blend in with brown trees and dirt.

But if I focused my attention to look for movement, nine times out of ten I would find movement. Often it was a squirrel or other small critter, but sometimes it was a deer. That was always a good day.

Why am I sharing this nostalgic childhood story with you? Glad you asked.

You see, what I learned on those hunting trips is that:

What you focus on is what you see.

And the same goes in our relationships.

It seems to be human nature to gravitate toward the negative. Negativity is infectious. One bad apple ruins the whole bunch as they say. We like to hunt for what’s wrong. When we look in the mirror, we’re never looking for what looks right, we’re looking for what’s out of place! Wrinkle in the shirt, pimple on the forehead, makeup smeared…you get the picture.

But what if we altered our outlook? What if when we looked in the mirror, we looked at all that was good and right?

It’s easy to see what’s wrong in other people. Maybe it’s the way someone talks or someone’s bad attitude or maybe someone just thinks different than you…and you don’t like that! (been there, done that)

But the truth is if we can choose to see the good in people, we’ll have much healthier, happier relationships.

Why? Because what you focus on is what you see.

If you focus on what’s good about a person instead of all the bad (no matter how much “bad” there is), you’ll begin to appreciate them for who they are and how they were made.

Quick exercise: Close your eyes and focus on a color, let’s say red. Now open your eyes and look for what’s red. See what happened? You began to see all the red around you, even where you might not usually notice it! That’s because what you focus on is what you see.

One of my best friends couldn’t be more opposite than me: I’m calculated, he’s spontaneous; I’d rather ask for permission than forgiveness, he wouldn’t. And for awhile, this drove me absolutely CRAZY. But with some help from my wife and many prayers, I realized that he was just wired differently than me and I needed to appreciate our differences and see the good in him.

And you know what? It changed everything! I really began to appreciate him and value his ideas and thinking. And you can do the same.

So, who in your life has been rubbing you the wrong way (“sandpaper people”) that you need to extend a bit more grace to? Who needs you to focus on the good in them? If we’re honest, sometimes it can be our spouses. But be real with yourself and don’t ignore the issue.

And most of the time the issue is you.

I know, I know some of you are thinking, “Ya, but you don’t know this person or you don’t know what they’ve done to me!” You’re right. I don’t. And I’m not going to try and defend every person and every circumstance. But the only person we can change is ourselves.

I'm a husband, father, writer, and leader who is passionate about bridging the gap between our life and our dreams. I want to inspire you and give you hope for your future.View Author posts