First marriages don’t always last forever, but second marriages are ’til death do you part.

According to the Marriage Foundation, 45% of marriages between first-timers end up in the divorce courts, but only 31% of second marriages will end in failure.

Are people tying the knot for the second time more likely to finally find happiness?

This topic is near and dear to my heart. I counsel couples and individuals on relationship and marriage issues, and I’m also a member of the Second Marriage Club.

I remember when I first met some of my new husband’s friends. One raised a glass and toasted me by saying, “To second marriages—they’re the best!”

Second marriages enjoy the benefit of experience. Certainly, it comes with its own period of adjustment, as there would be for any kind of change. But people in second marriages already “know the ropes,” especially when it comes to the logistics of sharing and running a home.

People in second marriages typically know what works and what doesn’t—including when to pick their battles (or not). They have, at the very least, a basic understanding of effective communication and conflict resolution. With all of these factors combined, second marriages are a real recipe for success.

2. Both spouses know themselves better

Second marriages reap the rewards of one or both parties having spent a large amount of time on personal reflection and growth. We don’t begin a second marriage without experiencing the end of a first marriage—and endings are often painful.

However, many remarried people allow this pain to bring their attention inward, thus setting in motion a profound journey of personal discovery, healing, and change.

One of my clients put it like this: “My second marriage works because I was really honest with myself about my role in the demise of my first marriage, and my own baggage!” Second marriages are often happier marriages, because people have learned to not repeat their past mistakes.

3. Couples want to “do it right” this time

Partners in a second marriage are all marked by the same drive to really make the relationship work. This is not to say that first marriages are devoid of drive, but remarried people experience this drive on another level.

Having already experienced the end of a marriage, people in second marriages develop a heightened determination to not take anything for granted. Remarried people also know too well what will happen if the marriage does not work out.

4. Couples have a sense of gratitude

In addition to drive, people who are in second marriages possess a deep sense of gratitude—gratitude for a second chance and gratitude for life and love, knowing how sweet and fleeting they are. Gratitude elevates us.

In her seminal book, Codependent No More, Melody Beattie describes the transformational powers of gratitude: “Gratitude unlocks the fullness of life. It turns what we have into enough and more. It turns denial into acceptance, chaos to order, confusion to clarity. It can turn a meal into a feast, a house into a home, a stranger into a friend. Gratitude makes sense of our past, brings peace for today and creates a vision for tomorrow.”

So cheers to giving love (and marriage) a second chance!

Written by Jamie Simkins Rogers
Originally Appeared on Yourtango.com
You may also like 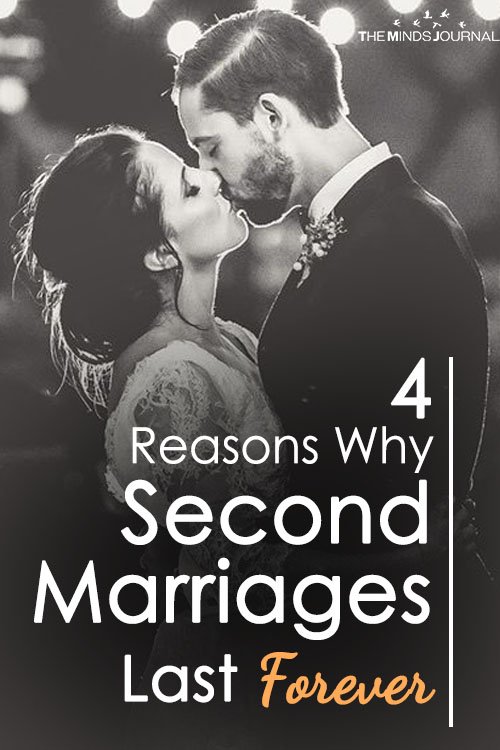