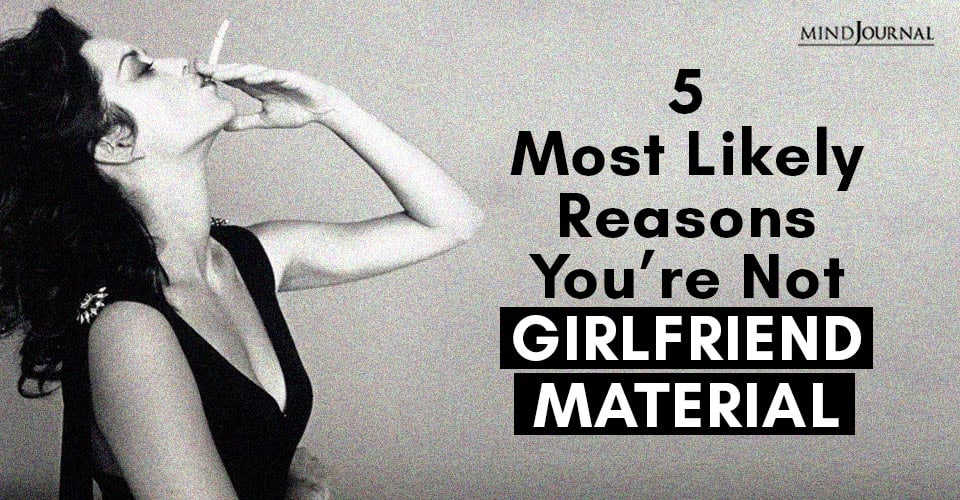 Some of my articles are sweet and nice, others cut straight to the point and bring you truths you may not want to hear but could really benefit from. This article is the latter. Read on to know why you’re not girlfriend material.

Look, I’ve been there, For a large chunk of time I was not girlfriend material. I was hookup material, I was great time material, but I was like Teflon when it came to guys, nothing stuck. I was capable of filling them with an intense desire for me, but it always fizzled out quick and I was left baffled time and time again. What’s wrong with me? Why can I catch them but never keep them? Why am I not good enough?

The fact is, there was a lot wrong with me! My perception of myself and my ways of going about getting what I wanted was totally skewed. I, like many, thought having a guy would give me this sudden sense of worth. I, also like many, failed to realize that I first needed to create that sense of worth within myself and until then I would be a tub without a drain, you can pour in as much water as you’d like but it will remain empty.

Based on the questions I receive, this is something a lot of women struggle with. And I get it. It’s harder than ever these days to be confident and totally happy with yourself — how can we when we’re all addicted to our phones and being flooded with perfectly curated images of other women living these seemingly perfect lives. And then there are the dating apps making it easier and harder than ever to settle down.

It’s tough out there but it doesn’t have to be. Be real with yourself and try to identify the reason why you can’t attract the kind of relationship you want.

These are the 5 most likely reasons you aren’t “girlfriend material.”

1. You lead with sex

This was always my biggest issue. I would lure them in with my sexuality, and a man being a man would happily latch onto it, but then there wasn’t much else to work with. So, you are not girlfriend material.

I got high off of being wanted so that was the goal … not so much being seen and building a connection. And a lot of women do this. It feels good to be desired. It’s a drug. So we lead with our sexuality. We dress a certain way, act a certain way, all with the intention of getting his juices flowing and capturing his attention, but then what?

OK, so he’s intrigued and he finds you attractive, but that really doesn’t mean anything. You may think it does, but he doesn’t see it that way. For guys sex is sex and a relationship is a relationship. Sex isn’t a means to get a relationship and oftentimes it’s not a measure of how he feels.

Women who lead with sex often don’t feel like they have much else to offer deep down. It’s an underlying lack of worth that causes you to rely on something foolproof, your sexuality, to get his attention but like I said, this doesn’t usually make for a long-lasting romance.

Related: How Sex Pressure From Males Can Permanently Diffuse A Female’s Sex Drive

2. You can’t connect with him

People who are insecure or have an agenda when entering into a relationship usually fail to get the relationship to go anywhere because they can’t truly connect. The reason is they are so stuck in their own heads, consumed by their worried thoughts, that they can’t possibly form a genuine connection with someone else.

You constantly worry about how he feels. You measure the number of texts and time how long it takes for him to text you back. When you don’t hear from him for a while, you feel a knot in your stomach and crumble into a pit of despair. You kind of always suspect he’ll leave you because that’s what always happens to you, so you are always on the lookout for something that looks like a bad sign.