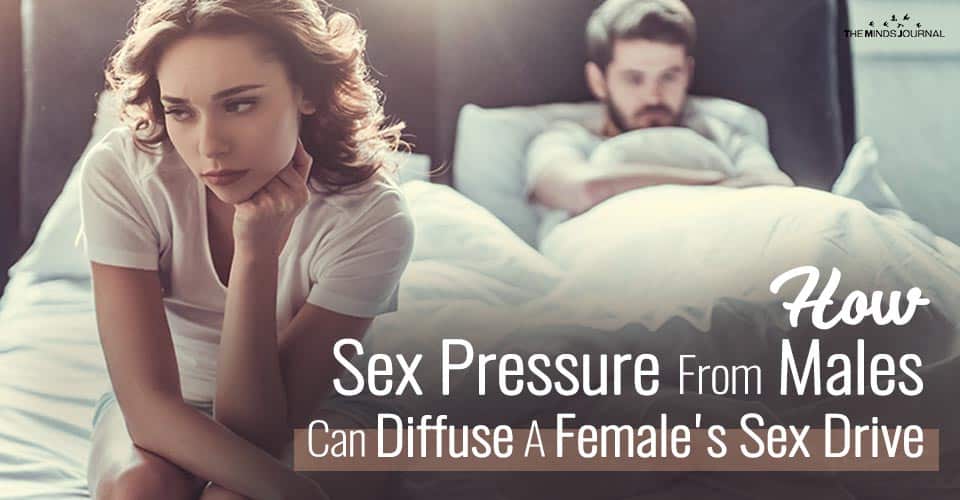 Many a time, too much sex pressure from males can permanently diffuse a female’s sex drive.
“Desire is in men a hunger, in women only an appetite.” – Mignon McLaughlin

It only takes one partner’s focus on an actual or anticipated sexual dysfunction to disconnect both during the act. It might even affect their desire in the future.

Can you relate to that?

Whether we’d like to admit it or not, the partner with the least desire for sex always controls the frequency and quality of sex.

Men who ejaculate in 1.9 seconds may even condition their romantic partners to become sexually inert and unenthusiastic, in response to their lack of sexual mastery.

Think back to your past relationships, or maybe even the one you’re in now—the partner with less sexual desire controls almost every element of your intimate activities.

In the case of a woman having less desire than her male partner, he may put pressure on her. As you can imagine, this sex pressure causes major dysfunction in the relationship, including reducing her sexual desire even more.

Here’s how sex pressure from men can kill a woman’s sexual desire.

Let’s look at a stereotypical relationship.

1) The woman was more sexually active before the relationship.

Unfortunately, the comfort of letting someone into your heart can turn couples into approval-seeking robots rather than erotically exploring partners.

As James pressures Marie to “spice up” sex, Marie loses the desire to even try. So James tries to make Marie want sex.

As men, we have been culturally conditioned that being a “good lover” reinforces our masculinity in the same way a boy allegedly becomes a man when he “scores” sex for the first time.

This conditioning has taught James that his sense of self comes in part from his sex life.

As a result, he “needs” Marie to respond to his sexual advances in order to validate his masculinity.

When James was a bachelor, he measured his self-worth by how many women desired him and how aroused they became when they were with him.

Here is a valuable message all men need to hear about female sexual desire: Women don’t want a partner who uses sex to demonstrate prowess rather than cultivate intimacy.

As James struggled to understand Marie’s sexual disinterest, he blamed her gender training.

He told her she was sexually inadequate instead of confronting his own feelings of sexual inadequacy. His blame blinded him to the truth about himself.

So when Marie didn’t respond to his advances, he attacked her.

3) Blaming a woman’s sexual desire for a lack of sex.

Never has blaming someone for not having the capacity to be sexually ever motivated someone to be more sexual.

As James attempts to make Marie want sex (and him), she wants it less.

James’s accusations have forced her into a sexually defeated corner.

There was no way for Marie to gain sexual “status” by increasing her sexual desire because any success would validate that James was right.

Not to mention, James acts as if hurting Marie’s feelings will make her more likely to have sex with him.

“For women, the best aphrodisiacs are words. The G-spot is in the ears. He who looks for it below there is wasting his time.” ― Isabel Allende

It does quite the opposite.

When the level of sexual desire is mismatched between partners, it can cause significant problems in a relationship that don’t stem from sex pressure from men. I’ve written more on that topic here.

4) The woman is unmotivated to improve sex.

With very little to gain and very little to lose, Marie is unmotivated to improve sex. She has already forfeited her sexual competence to his blame game.

As Marie becomes more closed off from sex, James begins to fear to look inadequate. This fuels his desperate attempts to keep her interested in sex.

James perceives Marie’s closed-off-ness as rejection. With these three tips, she can help stop him from taking this personally.

In a relationship like this, women often have a paradoxical experience: They feel inadequate, yet powerful.

When Marie was angry with James, she could jerk James’s leash by not responding, turning him into a needy boy desperate to validate his masculinity. When she wasn’t angry, his little boy’s neediness was unattractive.

His pressure to increase Marie’s sexual desire made him powerless.

It pushed their relationship into sexual gridlock.

Frequent invitations allowed Marie to remain passive. She could have as much sex as she wanted, when she wanted, without ever initiating it.

“Sometimes I get real lonely sleeping with you.” ― Haruki Murakami

James, like many men, was totally dependent on what the woman did.

Both parties are to blame in this scenario because the woman in this context is conditioning her man to badger her for sex.

The solution requires an uncomfortable effort from both partners—it requires personal growth.

The man must learn how to hold on to himself in the face of a disinterested partner, while the woman must learn how to boldly explore her sexuality and rebel against shame or cultural norms. The man needs to break free from the belief that his masculinity is defined by his sexual performance.

Both partners need to learn how to stop being slaves to the perceptions of other people.

Pressuring partners to measure up to our sexual standards is not a way to have more sex.

Low sexual desire is a signal for both partners to grow—it’s not the time for sex pressure.

A lack of passion is a signal that’s encouraging you to reach for your highest potential as a lover and person.

Sexual mastery is not a journey for the faint of heart.

It requires facing anxiety, self-worth issues, and overcoming perceptions that inhibit our sexuality.

Talking about sex with your partner can be hard. But here are four quick tips for making this process much more comfortable for both of you.

Release the pressure to measure up sexually and rise to the challenge of mastering yourself.

“Sex lies at the root of life, and we can never learn to reverence life until we know how to understand sex.” – Havelock Ellis

It is a well-known fact that men love sex, and sometimes more than women, but that does not mean that your partner does not want to have sex with you. Maybe they are just tired, or they had a bad day. Forcing them to have sex can never be the solution, as sex in a committed relationship should always be organic and mutual. More often than not, sex pressure from males has caused women to feel inadequate about themselves, which has led to the dissolution of the relationship.

So, make sure that when sex is on the table, both of you crave it and want it equally. Otherwise, is it really worth it?

If you want to know more about this, check out this video: