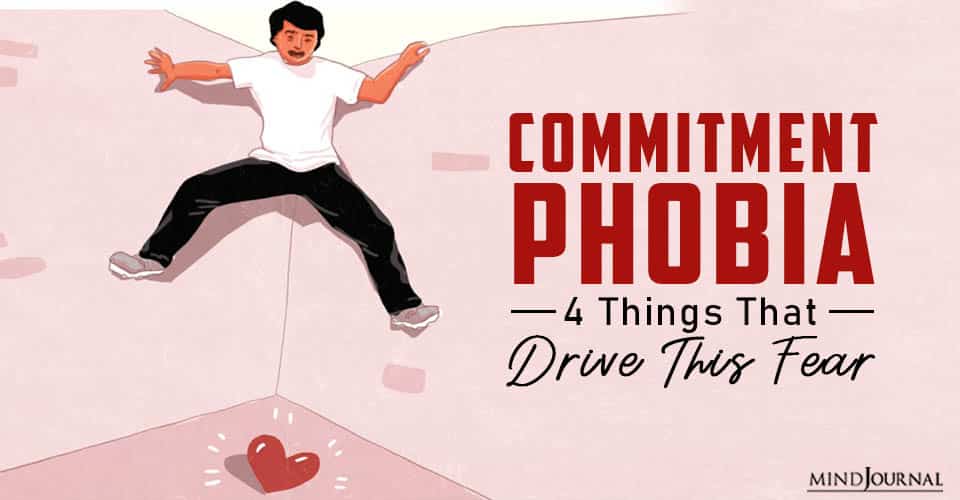 You must have encountered many people with commitment phobia. But have you ever thought about what makes them commitment-phobic?

Recently I was asked why it is that some people never enter into a mature, thoroughly committed relationship?

Although there are many possible reasons for this fear, most of the time it boils down to one of the following.

ONE: Peter Pan Is Alive and Well

This is more common in men than in women. The person simply does not wish to grow up. Being an adult requires that you place your needs (at least much of the time) second to those of others. Particularly those with whom you have a commitment.

Moreover, a committed relationship has obligations attached to it, and this means one must be accountable to someone else.

TWO: Ghosts From the Past

Another very common theme seen in both men and women. Those who grew up in homes where the parents had a horrible relationship are more likely to be afraid of commitment than those raised by parents who had a reasonably happy relationship.

This is particularly true if there were no alternative role models (e.g., happily married grandparents, or close friends whose parents were happily married).

Read 50 Questions To Ask Yourself To Know Your Deepest Insecurities

Although seen in both men and women, it is somewhat more with men. There is always the prospect that another partner will more fully satisfy one’s desires and longings. People who perpetually struggle with the Greener Pastures fallacy have failed to accept that no one will be a perfect match. Anyone with whom they develop a relationship will have strengths and weaknesses.

These individuals are simply terrified of rejection and failure. They have no problem being in a relationship as long as it does not involve meaningful commitment. When the “we” of a relationship starts to be more important than the “me” of the relationship, these folks head for the hills.

Asking for a deeper commitment from a “failure phobic” man or woman is similar to asking Superman to take a bite of a kryptonite appetizer. They shake with fear like the lead singer in a rumba band and quickly make towards the exit.

Men and women who are terrified of rejection/failure in relationships believe that were they to make a commitment and it did not work out, they would be crushed. Devastated beyond repair. Their solution to this fear? Play it safe, don’t risk too much, don’t take that big step into commitment.

Read The Deepest, Darkest Secrets Of Each Zodiac Sign Revealed

Very sad. At the end of life, no one looks back and says “I’m so glad I played it safe. My life has been so rich and full because I always played it safe and never risked my heart.”

So those are the four main obstacles to the commitment that I’ve noticed. But people can change, and no one is destined to remain stymied by these obstacles. It’s a matter of having the courage to try something new.

Suffering from commitment phobia can be a mentally exhausting thing to experience, but knowing what is driving this fear can help alleviate it. So, if you are someone who is scared of commitment, then don’t be. Loving someone and being in a healthy relationship is one of the best things life has to offer. Try to move on from this fear and embrace happiness in your life.

1 thought on “Commitment Phobia: 4 Things That Drive This Fear”