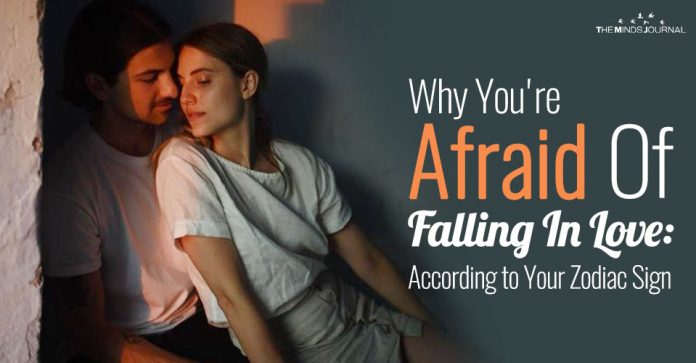 Why You’re Afraid Of Falling In Love: According to Your Zodiac Sign

According to your zodiac sign here’s why you’re afraid of falling in love.

Though there are exceptions, we here have tried to take into account the personality traits that are unique to the signs and from there tried to find possible reasons for fear in the spheres of attachment, romantic intimacy and relationships.

So here it goes.

They are really fiery in their passions. When they obsess over a particular person romantically, they do it ardently. Their greatest fear is their same passionate intensity backfiring; that is their passion not being reciprocated and in turn, appearing to be just an overbearing personality.

They get attached with difficulty but when they do, it’s nigh impossible to shake them from their resolve. And hence, they never want to be the one to break the relationship up.

They don’t want to choke you up, and no matter what it appears to be, they just want to protect you; from EVERYTHING. But their execution of this protection is oftentimes known to be problematic with frequent usage of the phrase “I am protecting you from myself (by breaking up)”; hence proceed prepared.

Now, this is another of the problematic signs; like bulls in a fighting pen, they are focused when they are in love. Thing is, the stage before is the icky one. They are VERY independent and career-oriented people, with concern ONLY for material gains.

Their greatest fear would be of the effect their romantic other has on their chalked out perfect lives and goals. Now I don’t know if this is consolation enough or not, (and this is true for Aries as well) once you two are a couple, even if you don’t last, your effect will last on their lives. Once they let someone in, they stay in one way or the other.

A Gemini is an airy sign. They spend their entire lives trying to figure out how to be around people and how to fit in.

Now, this is my favorite.
They are by far the most ideal sign romance-wise, tailor-made for long-term relationships. They are committed, thoughtful, imaginative, loyal, friendly; if you end up marrying a Cancer, the only fights you’ll have will be about what you want to have for dinner; and the most likely outcome would be them agreeing with you.

Sounds perfect? There is one tiny catch. They are insecure to a morbid level. And it is mostly about how if you are happy if they are treating you well enough. This has been known to lead to a number of fights. Also, they have high expectations from romances; which causes them to commit as much as they do.  If and when you do not meet these expectations, there might be episodes.

They are a proud race who values their pride and extreme rationality above everything else. Their only fear: Love itself. They are aware of the rose-tinted glasses love brings as an added package and of its consequences. They know how their senses will be compromised and their pride shattered and this will invariably cause them to shy away.

Here’s how you can understand how someone is attracted to you through their body language based on their zodiac sign.
Read more
Marriage

When in a relationship, do you tend to be passive-aggressive and give the silent treatment when upset, instead of talking about your feelings?
Read more
wpDiscuz
0
0
Would love your thoughts, please comment.x
()
x
| Reply