3 Reasons Why Orange Cats Are Special, According To Science 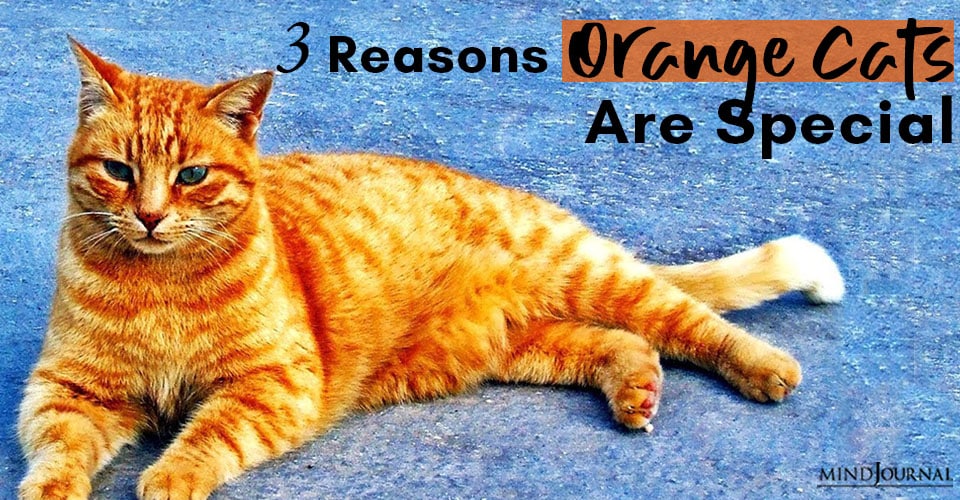 Do orange cats make your heart go……Awwwww? There are many people who are particularly attracted to orange cats, they find them charming. If you are wondering what makes these cats so special, then here are science-based facts that you should know.

Why orange cats are friendly?

Flame-colored kittens are naturally adorable and people find them charming. Unlike other shy cats, these orange cats appear more comfortable in approaching humans. So, a lot of people find them friendlier and affectionate.

The gene responsible for the orange color is sex-linked, and it is highly likely that an orange cat will be male than female. And male cats are friendlier than female cats – there we have evidence. Although the exact reason is not known, the genetic link between sex and the coat marking why male orange tabby cats outnumber females

Scientists at the University of California, Berkeley surveyed 189 cat owners in a study published in the October 2012 edition of Anthrozoos. As per results, more people rated Orange cats as the friendliest, while white cats were rated as aloof, and tortoiseshell cats were thought to have too much “attitude.” In the follow-up survey in University of California Davis study, responded rated orange cats –  lowest on the aggression scale.

Related: Can Pets Cure Us Of Our Illnesses?

To be honest, there is no large concrete evidence supporting that prove orange cats are friendlier than cats of other colours. But, these cats have earned a reputation of being attention-seeking, cuddly, and clingy. Survey results signal – confirmation bias or a self-fulfilling prophecy, because cat owners will naturally support their own stereotypes.

Moreover, when people answer the survey questions, what one person finds as aggressive behaviour is treated as playfulness by others. Because in Berkeley study, respondents found orange cats as friendliest but respondents of Davis study labelled them as aggressive.

In reality, orange cats start socialising with people very early on in their lives (ages of 3 and 9 weeks), which has a significant impact on their personality. They like to play a lot with anyone, so their interactions with people are more positive. As a result, they grow up to be more affectionate.

According to the American Association of Feline Practitioners, Kittens don’t develop a fear of humans if they start interacting with people at an early age. If the socialization is delayed, these kittens grew up to be shy and timid cats. Also, genetic factors influence their personality and affectionate nature.

Related: How Cats Protect You and Your House From Negative Spirits

What is so special about orange cats?

They differ from cats of other colors in various ways according to French scientists, led by biologist Dominique Pontie. They conducted a study examining the frequency of the orange gene variant among cat populations. Researchers analyzed 30 cat populations in France and collected data from 56 to 491 cats from each population. The results were intriguing and here are three trends they observed regarding this particular cat population.

1. They are more common in rural areas

2. They are more likely to engage in risky behavior

Engaging in risky behavior results in death, so orange cats are less common in areas with greater mortality risk.

In urban areas, orange male cats may not enjoy high social status. In dense environments, female cats get the opportunity to mate with many male cats.