How Cats Protect You and Your House From Negative Spirits 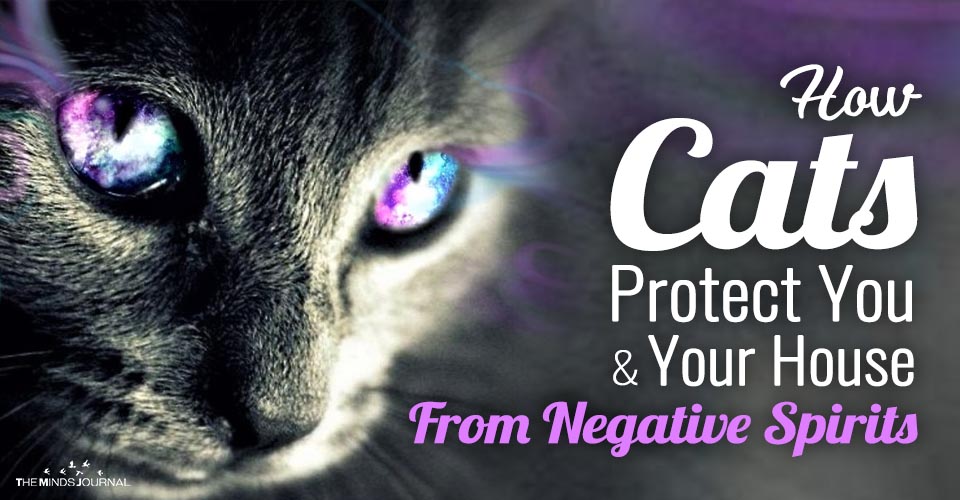 Contrary to what people think the cat is an animal with a great positive aura and can protect you and your house from negative spirits.

A cat takes in its fold not only its owner but the entire family it lives with, the home and the surroundings where it ventures.

Don’t be irritated when a cat rubs itself against you. In the course of the act, it shares with you its astral force, the magic that every cat has. If you push it away, you deprive yourself of the positive energy that this magical animal wanted to give you. With cats, there is no second time. They may not again give you such astral forces anymore and may even take back whatever it had given you in the past.

Do you believe that cats can see the spirits that you cannot?

Cats are protectors of the household they live in and protect you from negative spirits. The area a cat considers it’s own is blessed by its positive aura. A cat’s presence helps even when someone moves to an old house where people have lived before.

Cat and the evil/ negative spirits

When a cat finds evil spirits in the house, the cat tries to ascertain its intentions and then ‘sucks’ the evil spirits and remove them from the house completely. If you find your cat staring at something or sitting at a particular corner of the house for long periods of time, it indicates there are evil spirits out there. Help your cat by reading prayers or performing a cleansing ritual. If you don’t know any such thing just fumigate with wormwood. Wormwood is considered a very powerful tool to drive away evil spirits.

The astral ability of cats is so very strong that they can frighten away ghosts. They were not allowed when magicians called spirits. But for some rituals, it was encouraged.

Astral ability cat is so strong that it can easily get rid of the ghost house. For this reason, the magicians are not recommended during the séance room to keep the cat. It can scare the astral beings. Although in some cases the presence of cats during magic rituals, on the contrary, very encouraged.

Cat and the household

People jealous of you can lay their evil eyes on your happiness leading to loss of health, wealth and prosperity. If you suspect some danger from something, or fear damage or evil eye, or come across someone who intends harm to you, touch your cat with both hands and then caress the cat’s left hand and continue to the tail. This will allow you close contact with your cat. While you do this, you bring yourself in the powerful realm of the animal which will deflect even the strongest attack by a witch or sorcerer.

Cats are channels through which cosmic energy is conveyed they can lead such positive energy into the household they are committed to.  That is why they can so well contribute to the well-being and prosperity of their human family. Cats choose the geopathogenic zones in the house they live in. These zones are places where a large number of negative energies flow.

In Russia, there is a ritual to let the cat into the house before moving in. If the house is an old one the cat will eliminate the negative energy that was left by the past owners. In the case of an old house, the cat will attract powerful energy into the house as they are used to living in high energy zones.

Cats have great magical powers that can heal a person. This is true of cats of any breed or color. They will lie on the affected spot of their ailing master and inadvertently cure them of their disease. You can be on a continuous healing process by just stroking your cat. This activity alone relieves emotional and mental stress. It is the easiest way of healing. Cats are also known to heal faulty vision. Healers recommend a tape white cat which is believed to have extraordinary healing entities.

As far as psycho-emotional effects on humans are concerned, Bobtail, Persians and Exotic, sphinxes, Rex, munchkins are believed to have twice the magic powers than the cats of other breeds. Because of their facial and other physical features, they are known to have such healing abilities.

If you want to use the magical powers of a cat, it is extremely important to take their color into consideration.

Black colored cats are associated with occult powers, witchcraft, deep magic and protection. Believe it or not, black cats have great power of absorbing negative energy and rescuing a household from impending troubles. Their presence brings in wisdom and the power of true justice in the dwellers.

These beasts are linked with classic witches moon, abundant male power, and power of the sun as well as Yang energy. Whether male or female, red cats attract money, wealth and focus.

Did you know that cats can make you feel positive and good?

Read Cats Are Natural Empaths Who Can Heal Your Mind, Body and Soul

White cats can relieve stress with their powerful healing powers.  Sorcerers can create lunar magic with white cats. These animals possess an energy that can provide good health to the people of the household. In America, they are linked with good omen.

The royal color- They can bring longevity success, solar magic, and Yan energy.

Cat supreme goddess. They are a combination of three colors-  varieties of white, red (inherited from parents), deep black is linked with triple goddess. They protect the family from any harm wherever they are and attract prosperity and happiness.

Legends have it that these cats are very friendly and are the best mousers. Their presence bestows the household with common sense understanding and wisdom.

They are associated with solar magic and are revered as temple cats. They are royal, wise, lively and playful. They help in attaining age-old wisdom.

For those who want to bring good luck, cheer, liveliness to their lives, this cat is for them. They bring such vibes that keep away stressful situations and bring in humor and lightheartedness in the people living in their surroundings.

Cats are beautiful creatures, and all the stereotypes and prejudices about them are unfair and wrong on every level. They are known to protect their owners from negative spirits and keep them happy.

If you want to know more about how cats protect their owners from negative spirits, check out this video below: