14 Must Read Books As Recommended By Emma Watson 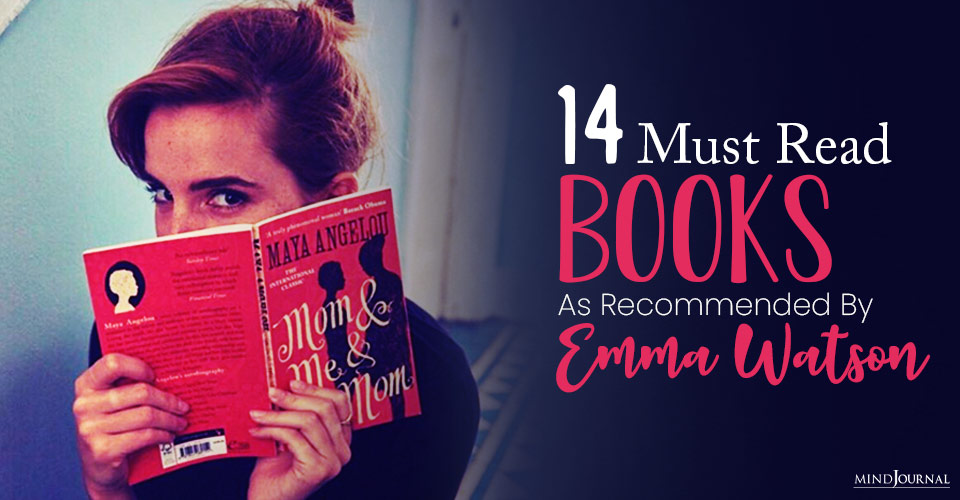 Don’t we just love to read? Well, Emma Watson, the Harry Potter actress, you and I have a lot in common. She enjoys reading as well and considers herself a bookworm. Many people look up to her as a global feminist icon, and Watson frequently discusses the books she reads on social media and in interviews. Let’s dig into some of the must read books as recommended by Emma Watson. It includes her favorite books, ranging from fiction to iconic classics.

As she says, in an interview,

“I like books that aren’t just lovely, but that have memories in themselves. Just like playing a song, picking up a book again, that has memories and can take you back to another place or another time.”

1. The Shadow Of The Wind By Carlos Ruiz Zafón

Among the books recommended by Emma Watson, On a gloomy day, “The Shadow of the Wind” is a book you should read. It’s a tale about a ten-year-old boy named Daniel who picks up a book written by an author who may have appeared to have vanished from the face of the earth. Daniel and his father live just above a bookstore, and their lives change when they share a passion for books.

Related: 10 Books To Ramp Up Your Intellect

2. The Handmaid’s Tale By Margaret Atwood

The Handmaid’s Tale, another book recommended by Emma Watson, was also her June selection of books. She stated that this book brilliantly expresses what it feels like for a woman to lose control over her own body.

This dystopian tale is about life in a totalitarian regime ruled by a radical religious dictatorship that views women as state property.

Cheryl Strayed thought she’d lost everything when she was twenty-two. Her family dispersed in the aftermath of her mother’s death, and her own marriage was soon destroyed. She made the rashest decision of her life four years later when she had nothing left to lose. The traumas and delights of her making her way against all odds on an adventure that caused her pain, strengthened, and eventually healed have been vividly captured in “Wild.”

Related: 25 Best Nonfiction Books That Will Change Your Perception Of Reality

4. The Power By Naomi Alderman

Under Emma’s top picks Naomi Alderman’s The Power is a book about how teenage girls all over the world develop the ability to cause destruction by transmitting electricity through the touch of a finger. The information spreads rapidly on social media, and the girls are soon teaching older women how to activate their undiscovered powers. In a matter of years, gender roles will be reversed, and women will rule the world.

Tiny Beautiful Things is a collection of Cheryl Strayed’s columns that offer advice on how to deal with failure when you’re trapped, heal when you’re broken, and gain the confidence to confront questions that you don’t have answers to. This book comes under the list of books recommended by Emma Watson, as it gives insightful answers to the questions you have in life.

Related: 11 Great Books To Read And The Mood That Matches Them

6. The Color Purple By Alice Walker

Alice Walker’s The Color Purple is a classic that Watson recommends. It follows Celie, an African American teenager brought up in a small village in Georgia, as she struggles to overcome the crippling concept of the self, imposed by others on her.

7. The Remains Of The Day By Kazuo Ishiguro

The Remains of the Day by Kazuo Ishiguro is a deeply emotional story of Stevens. He is the perfect butler but his world falters during the post-World War II situation in England. This comes under the books recommended by Emma Watson as it embodies the implications of living a careful time on earth.

Related: 8 Unputdownable Fiction Books You Must Read in 2020

The Little Prince comes under her list of favorite books. Antoine de Saint-Exupéry’s classic book published in 1943 comes with its endearing illustrations of a young prince and his tiny planet, which may appear to be a children’s fairy tale however it appeals to readers of all ages.

9. The Queen Of The Tearling By Erika Johansen.

The Queen of the Tearling is one of Emma’s favorite books. This tale is about Princess Kelsea Raleigh Glynn, who was raised in exile and embarks on a dangerous journey back to her birth palace to reclaim her rightful throne.

Robin Wall Kimmerer published Braiding Sweetgrass in 2013. It’s a book that looks at the relationship between living things and human efforts to create a more sustainable world through the lens of indigenous traditions. The author sees how modern botany can be explained with the help of these cultures.

When reviewing this book, Watson wrote, “This is perhaps the greatest window into what shaped Angelou as a writer and poet and a fitting end to a lifetime of amazing works.”
In “Mom & Me & Mom,” Angelou recollects her relationship with her mother, allowing us to see the hardships she experienced throughout their complex relationship. This book explores how Angelou’s identity and worldview were influenced by their extraordinary mother-daughter relationship.

12. East Of Eden By John Steinbeck

Among Watson’s book recommendations is East of Eden, a work in which John Steinbeck signifies a biblical scope with the most captivating characters and explored unwavering themes such as the mystery of authenticity, the inevitableness of life, and what happens when there is an absence of love in life.

Untamed by Glennon Doyle is a soulful and humorous memoir as well as an energizing wake-up call to understand what it means to be a woman. It’s the account of how a woman discovered that a responsible mother is not one who slowly dies for her children, but rather one who teaches them to live to the fullest.

14. I Am Malala By Malala Yousafzai

Watson read Yousafzai’s book before interviewing her to fully understand what led to her being targeted by the Taliban. She recommends this book to anyone who wants to gain a new sense of empathy and support the fight for equality and universal education. “I am Malala” is a powerful story of nonviolent protest and the right of girls to an education.

Related: 25 Incredible Novels You Must Read At Least Once In Your Life

Some of these books just are an eye-opener to life. Did you enjoy reading the books recommended by Emma Watson? Share your thoughts with us in the comments.

One of the most underrated modes of spreading awareness is books, and in these last few years, there have been so many brilliant fiction books about mental illness. These books didn't just have a solid story, the authors did a phenomenal job of portraying mental illness and its different facets in a sensitive and engaging way.

Literature has played a huge role in destigmatizing mental illness and has always worked towards treating it as an important topic for conversation rather than something that should be shoved under the rug and avoided. Even though non-fiction books have dominated the book world when it comes to talking about mental health and mental illness, these fiction books that focus on mental health are brilliant, to say the least.

9 Best Books On Narcissism You Cannot Afford To Miss

Narcissists are everywhere, and everyone knows at least one narcissist in their lives. They are selfish, self-absorbed, and toxic to their core, and no matter how hard you may try to make them see the light, they will always choose darkness. If you have been tormented by narcissists, or know a few, these are some of the best books on narcissism that you can read to better understand how they function and what you can do to tackle them effectively.

If you know a narcissist, you would know how problematic, entitled, and emotionally draining they can be. The only person they care about is themselves and they could care less about the people around them. Even if you are the best thing in their lives, they will treat you like garbage.

Things can feel very depressing, emotionally taxing, and bleak when you are intricately connected to a narcissist. But

Bibliotherapy for depression is one of the most effective tools out there, and even though a lot of people might not know about this creative and expressive practice, its benefits are immense. So the questions now are how bibliotherapy helps depression, what are the benefits of bibliotherapy, and what is bibliotherapy in mental health? Let's take a look.

Bibliotherapy is a creative expressive art that offers research based benefits. Engaging in bibliotherapy brings on emotional and cognitive shifts. Bibliotherapy can help reduce symptoms in subclinical and mild depression.

Bibliotherapy is a creative arts therapy, where the reading of books can help a child or an adult move through emotional expe

Literature is one of the biggest arenas for black people to show their grit, imagination, and talent, and because of so many black authors, we get to understand the struggles and stories of black people around us. Being an avid reader, I always try to read as many books as I can by black authors, not only during Black History Month but also for the rest of the year.

Black literature can tell us a lot about their culture, lives, emotions, and struggles, and by reading their books, we get to know more about their stories. So go ahead, and get thes