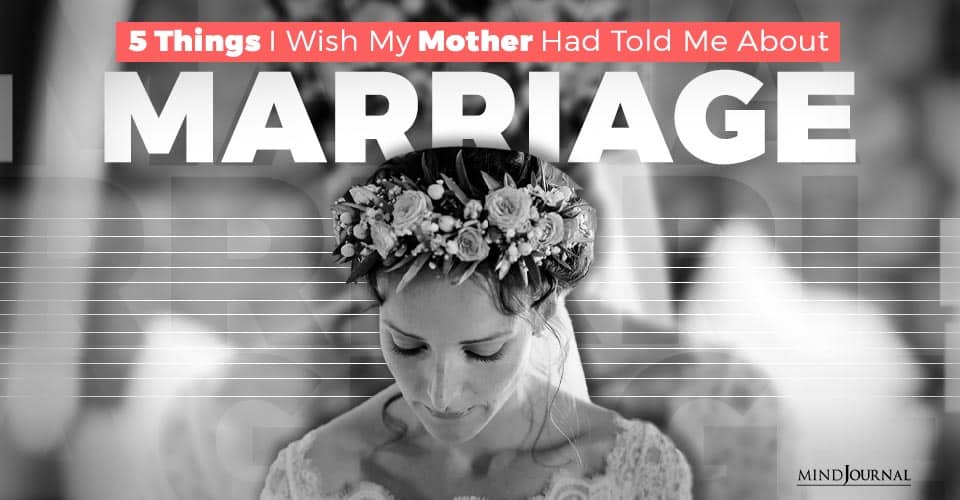 Marriages are beautiful, yes it is. Among the preparations, possibilities, and love, there is an excitement to be with our “the one”. But one thing also lurking at the corner behind those giggles and flowers, is Uncertainty. Regardless, what we’ve planned, there are some things we never imagine would come our way. That’s when we wish maybe we knew before or our mother have told us about sharing vows.

There are so many things I wish my mother had told me about marriage before I walked down the aisle.

After all, she had been through it and had had a hellacious time. She got married at 25, had me and then my brother and sister, and was divorced by 39. I was the oldest and I watched my parent’s marriage fall apart but I truly never understood what had happened to them.

Now here I am, divorced and contemplating another marriage.  But, unlike the first time, I am not new at marriage. I have experience and wisdom and know what I need to do differently to make this marriage work.

No one hands us a manual when we get married so it’s important that the information is passed down generationally.

To that end, here are 5 things I wish my mother had told me about marriage that I know today.

Let me share them with you so that you go into your marriage with your eyes wide open.

1. Make it about love, not about timing.

I got married when I was 28. My ex and I had been together for 5 years and we were happy. We knew each other well, shared the same hobbies and had just moved from San Francisco to Maine. All of our friends were getting married and having babies and so we decided it was time to do the same.

He proposed and I accepted and naively believed that we could love each other forever, even if I wasn’t madly in love with him. We had a really fun wedding and a great honeymoon. It was all lovely.

18 years later, our marriage was in tatters. We were still friends, excellent parents, and good business partners, but our marriage was DOA. I talked to my therapist about it and he said that for people who aren’t madly in love when they marry, bringing a marriage back from the dead is very hard to do.

I do believe that there is more to a successful marriage than just love. Love is an important part of it but so is respect, trust, and kindness. For a marriage to stay healthy as the years go on, it is important to maintain love amid the craziness of the world around us.

So, before you walk down the aisle, make sure it’s not about timing, not because you have always wanted to get married by 30 and have kids by 32. Instead, do it because the person you are going to marry rocks your world.

Instead of telling my ex what is it was that I needed, I would make snide comments and belittle him. How well do you think that made him feel?

I know now that one of the reasons I did this was because I really didn’t know what I needed but also because I didn’t have the communication skills that would have allowed me to talk to him. As a result, passive-aggressiveness was my number one mode of communication. And it got me absolutely nowhere.

Over the years, this passive-aggressive behavior caused a huge rift in our relationship. He would tiptoe around me, trying to figure out what to do so that I wouldn’t snap at him. I know that living with me was hell.

So, as you go into a marriage, I would encourage you to develop communication skills immediately. Being passive-aggressive in your marriage will only destroy it.

Read: Are You Passive-Aggressive in Your Relationship?

3. Make your husband a priority.

For those of you who are mothers already, I am sure when I say this you say ‘no way.’ And I can appreciate that. My kids always come first.

What I am not saying is that you have to prioritize your husband over the kids. What I am saying is that they need to the next one. Not your job or your mom or your friends – your partner.

My dad always said that he was 6th in our household. That he came behind the kids and the dogs. It wasn’t that way when he got married so it only left him lonely and confused. And I know that it’s one of the reasons that his second wife didn’t get to have any kids – because he wanted to be a priority.

Why is making them a priority important?

Because it keeps the relationship strong. Because they know that you have their back and will make time for you and that you can trust them and respect them. It’s way easier to keep a marriage healthy than try to fix it once it’s gone bad.

Ironically, men do often keep their wives as a priority so it’s on us girls to step up and do the same.