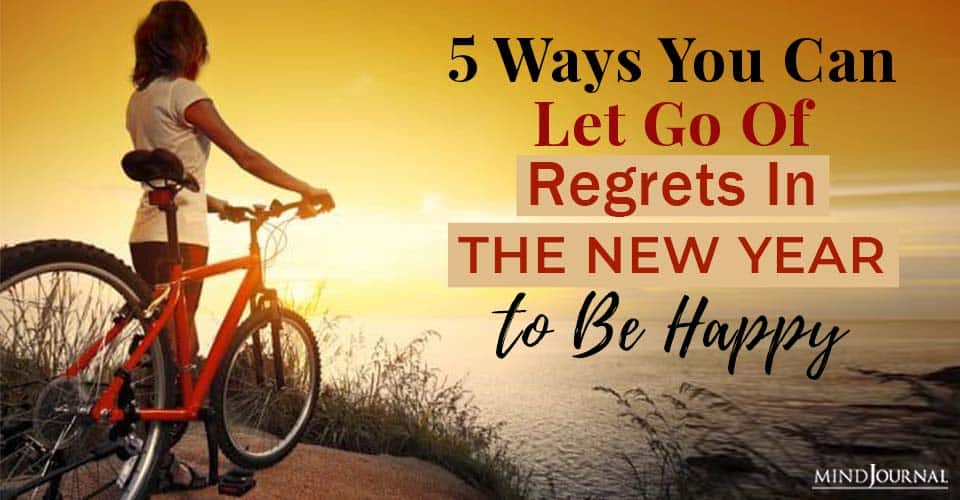 Are you, like many of us, hoping to let go of regrets in the New Year? You know the regrets I am talking about – the ones that give you a pit in your stomach when you think about them. The regrets about choices that you did or didn’t make.

Regrets can be hard to live with. Regrets make you think about the way your life could have been if only you had gone a different direction. And, unfortunately, regrets can keep us mired in the past instead of living in the now and seeing the potential of the future.

Learning how to let go of regrets is the best thing that you can do to help build the life you want.

Here are 5 ways to let go of regrets in the New Year so that you can look ahead to the potential of your life instead of being stuck in the past.

For many of us, we have more than one regret and those regrets are rolling around in our brain, doing nothing but causing us damage.

I am a big believer in getting things out of your head and onto paper. They say that thoughts are 4x more destructive left in your head than they are when they are out in the world. Therefore, I encourage you to sit down with a pad of paper and write out your regrets. It might not be easy but it will be the first step towards letting them go.

A few of my regrets, just for example.

1. That I didn’t choose running over badminton in 8th grade.

2. That I didn’t say yes to Shawn Miele when he asked me out to lunch.

3. That I went to culinary school instead of hotel management school.

4. That we moved to Boulder instead of staying in Maine.

5. That I didn’t address my mood issues sooner.

It’s interesting, writing out that list was harder than I thought. I thought that I had tons of regrets but actually, it seems that I only have a few. That feels pretty good actually.

The thing about regrets is that we are always longing for the life we might have lived if we had chosen that road instead of the one we did. Hindsight is always 20/20 and we just know that, if we had made a different choice, our life would have been better.

But I don’t think it’s that easy. Yes, if you had chosen a different path your life might have played out differently but that doesn’t necessarily mean it would have been better.

I recently read an excellent book about regrets, The Midnight Library. In it, the protagonist Nora is given a chance to live the many lives that she would have lived if she made a different choice. And yes, some things in her many lives were better but her life definitely wasn’t perfect.

In one, she was the rock star (a past regret being that she had walked away from her band) but, in that life, her brother had died of a drug overdose. In another, she was married to the man she had regretted walking away from but, in this life, he was an alcoholic and their marriage was a shambles. In a third, she was a geologist, a career not chosen, but she was in Antarctica when her mother died.

So yes, if we had made the choices that we regret not making, our lives might have been different but perhaps not necessarily better.

I know that while I regretted moving to Boulder because I think it was the reason my marriage fell apart, I also know that, if we hadn’t moved, my daughter wouldn’t have found the high school that changed her life and that we wouldn’t have adopted the dog who helped my son get through college.

Making that choice, I believe, changed the course of my life. While my marriage falling apart was devastating, in the end it was all good. I have a wonderful life and my kids are thriving.

So, look at your regrets and recognize that the life you think you might have led had you made that choice is not based on any truth but on a story you have created in your head.