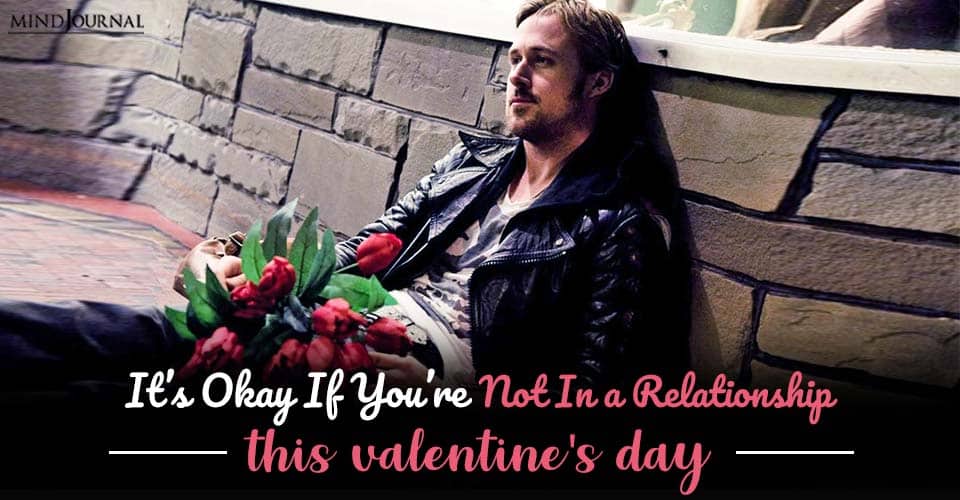 It’s okay if you are not in a relationship this Valentine’s Day, because love should never be forced, nor should it mean you being with someone who is not right for you. Just because you don’t want to be alone.

As Valentine’s Day approaches, millions of people are feeling lonely pangs of the “I Ain’t Got Nobody Blues” and begin to put themselves through all kinds of angst and uncomfortable emotions because they fear that they are missing out on something. FOMO, or Fear of Missing Out, can hijack your heart and make you feel less than, just because someone else is doing something you think you might want to do someday.

Many people still believe in and want to be in a romantic relationship, but the truth is many people out there are single and have had more breakups than they care to remember — those who are unhappily alone trying to steer their gaze away from all of the Valentine’s Day paraphernalia that hits the supermarket shelves on January 2nd. And that’s understandable.

I don’t think there’s another holiday that makes more people feel left out than Valentine’s Day. When I was a child, at this time of year, the teachers would ask everyone in the class to make an envelope out of construction paper and tape that we would decorate, write our names on, and hang over the back of our chairs.

Then we would put our heads down on the desk, and be tapped on the shoulder, one at a time, to put Valentine cards we’d brought into the envelopes of the other kids—the ones that we liked. This was cute unless you didn’t have many friends. I remember one year getting a card from the teacher and one from the kid whose mom told them to make a Valentine for every student in the class (Thanks, Mrs. Kibby). I was no Ferris Buller. It was heartbreaking, and it still stings a little to remember it.

Fortunately, we have evolved and this horrible ritual no longer takes place, as far as I know.

Related: 5 Reasons You Should Not Rush Into A Relationship During Valentine’s Season

But Valentine’s Day still stirs up pain in the hearts of those who long for companionship but just can’t seem to make it work. I get it. I was there for too many years and the only thing I can say is, hang in there. If a relationship is what you really want, you can make it happen; counseling can help.

On the other hand, there are millions upon millions of the so-called quirkyalone crowd, whooping it up with their other quirkyalone friends at events all over the world. Other singles groups are doing the same—I am sure the new self-partnered gang will join in—and it all sounds good to me.

In my alone years, there were no fun things to do for singles, but now the tables have not only turned but been set and topped with a spread fit for royalty (or ex-royalty). All kinds of singles events are out there. You just have to stop feeling sorry for yourself and go out and play with others in the same boat.

Just remember, it’s far better to wait for the right person to come along than to be with the wrong one. It worked for me.

So, if you are not in a relationship this Valentine’s Day, then please know that it’s okay. Being in a loving relationship with the right person, is any day greater than just being with someone who is wrong for you, all because you don’t want to feel alone on V-day.

Dr. Barton Goldsmith, an award-winning psychotherapist, and writer have been a nationally syndicated columnist for over twenty years. His columns have been published in over 500 newspapers world-wide and he has written over 3,000 articles. He has been a working psychotherapist for over 30 years specializing in The Psychology of Life, Love, and the pursuit of Happiness. Since 2002, his weekly newspaper column, which is syndicated by Tribune News Service, has been featured in hundreds of publications including The Chicago Tribune, The Santa Barbara News-Press, The New York Daily News, and many others. Dr. Goldsmith connects with audiences worldwide with his energetic, uplifting, and fun communication style. Not a button-down shrink, he has a unique ability to inspire and entertain which leaves his readers, viewers, and listeners always wanting more.View Author posts