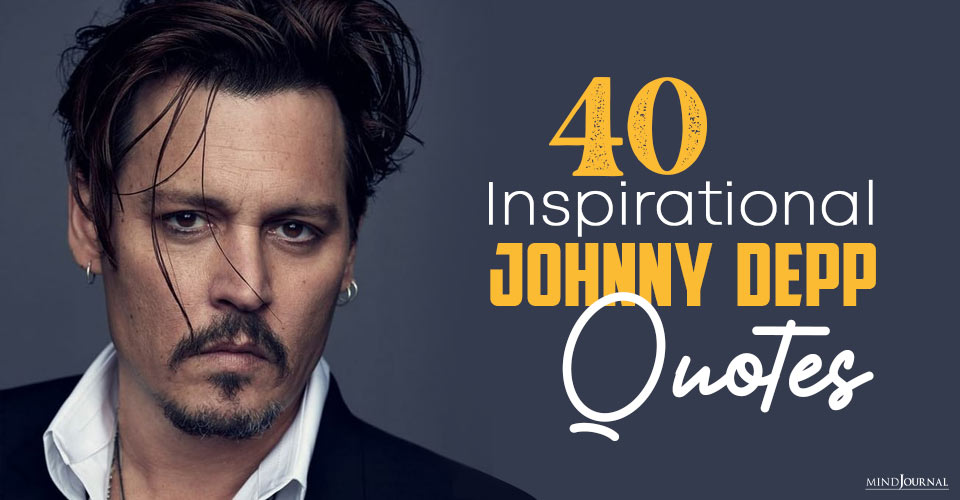 Are you looking for the popular Johnny Depp quotes on love and life? Your search ends here!

Johnny Depp’s name is on the news recently, but for all the wrong reasons. The 58-year-old celebrated American actor, musician, and producer has been involved in a long and bitter defamation lawsuit that he filed against his ex-wife Amber Heard when the latter made a veiled allegation of domestic violence against Depp.

Although the undesirable incident has done some negative publicity for the “Pirates Of The Caribbean” star, it has not been able to put a dent in Depp’s huge popularity.

Born as John Christopher Depp II, America’s beloved Hollywood star Johnny Depp is an acclaimed movie star, loved by fans and critics alike. He has a huge fan base and a long list of super hit movies under his belt, including A Nightmare On Elm Street (1984), Sleepy Hollow (1999), Charlie and the Chocolate Factory (2005), Alice in Wonderland (2010), and many more.

He was also mentioned as the world’s highest-paid actor by the Guinness World Records in the year 2012. Depp is known for his penchant for playing outlandish, marginal, and eccentric characters on screen. He is the winner of a Golden Globe Award and a Screen Actors Guild Award, besides several other accolades, and 3 Academy Award nominations.

Johnny Depp’s popularity has grown more due to his insightful and rich observations of life that can be found on the internet in the form of quotes. His early life struggles and hardships have made him handle his fame and prosperity with much grace and humility. And this profound wisdom regarding success, love, and life in general, can be found embedded in all the Johnny Depp quotes.

We have curated a list of all the famous Johnny Depp quotes that will inspire you to have an empowered outlook on life. For the best Johnny Depp quotes, both on-screen and off-screen, stick with us till the very end.

Related: Do you get blamed for reacting to abuse? Find support and insights from our collection of reactive abuse quotes.

Check out these Johnny Depp quotes for motivation and encouragement.

2. “Just keep moving forward and don’t give a shit about what anybody thinks. Do what you have to do, for you.”

3. “I don’t think anybody’s necessarily ready for death. You can only hope that when it approaches, you feel like you’ve said what you wanted to say. Nobody wants to go out in mid-sentence.”

6. “Growing old is unavoidable, but never growing up is possible. I believe you can retain certain things from your childhood if you protect them – certain traits, certain places where you don’t let the world go.”

7. “People say I make strange choices, but they’re not strange for me. My sickness is that I’m fascinated by human behavior, by what’s underneath the surface, by the worlds inside people.”

8. “I like the challenge of trying different things and wondering whether it’s going to work or whether I’m going to fall flat on my face.”

9. “Do what you really want to do. Don’t Play their game! Don’t do what they want. Find your own way.”

Use the following Johnny Depp quotes to emphasize the value of love, care, and compassion in your life.

10. “Laugh as much as you breathe and love as long as you live.”

12. “If you love two people at the same time, choose the second. Because if you really loved the first one, you wouldn’t have fallen for the second.”

13. “The only creatures that are evolved enough to convey pure love are dogs and infants.”

14. “There are four questions of value in life… what is sacred? Of what is the spirit made? What is worth living for, and what is worth dying for? The answer to each is the same. Only love.”

15. “Love is not blind. It simply enables one to see things others fail to see.”