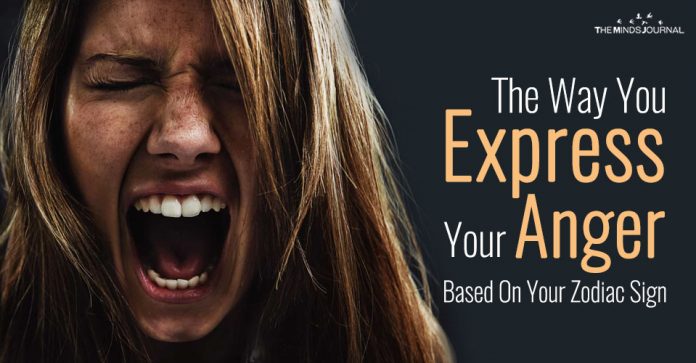 The Way You Express Your Anger Based On Your Zodiac Sign

No matter how chill or laid back you are, you will get angry. You may be the type of person who gets angry easily, but is your anger session long-lasting, or does you hold things in while you are it builds inside you until it explodes out? No one is immune to feelings of anger.

There are many kinds of anger and many ways of expressing, but is the way you express anger just a personality quirk, or is it determined by your zodiac sign?

See if your anger style matches your zodiac sign. 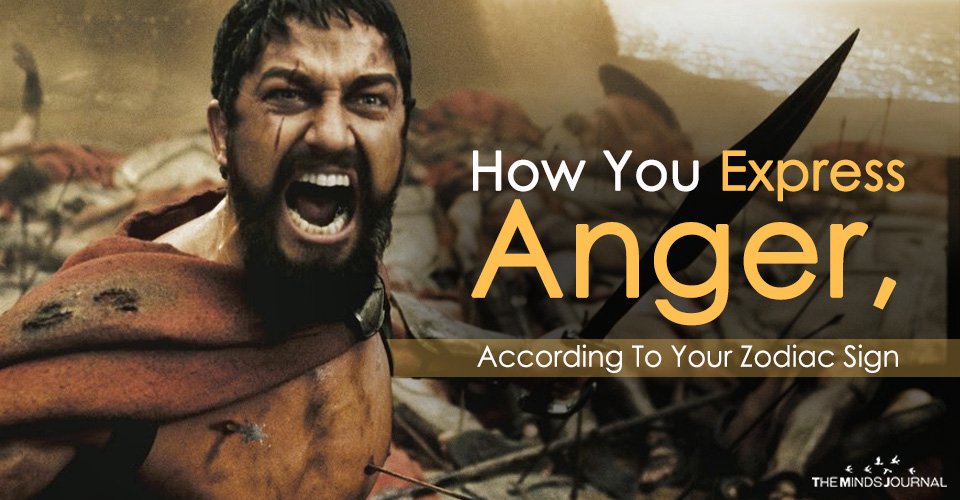 Aries is considered the baby of the zodiac and they’re known to explode without considering how their actions will affect others. They aren’t ones to sugar-coat their feelings and if they’re mad at you, watch out.

The fire of their rage is easily lit, but will quickly be extinguished if the person they’re screaming at doesn’t react and remains calm. Aries cool down quickly and usually feel very sorry about their outburst — but that won’t stop them from blowing up again soon.

Builds up, then explodes

When a Taurean gets angry with you, they’ll give you subtle hints at first, becoming silent and cold, and then they erupt like a volcano spewing hot rage, destroying everything in sight. Those born under the sign of Taurus don’t get angry easily, but when they do, they often express their anger by throwing things and are entirely capable of losing their sh*t. You don’t want to be in their line of fire.

Geminis love to talk, so it makes sense that their go-to form of anger expression is screaming, shouting, and hurling soul-crushing, sarcastic, and occasionally mean words. But since they’re known for having two sides to their personality, screaming isn’t the only way they express anger.

They can also be cool, level-headed, and strike your jugular vein with the perfect cutting remark. Whatever you do, don’t judge the Gemini or offer an opinion on what they should be doing with their lives, or you’ll be the focus of their rage.

Experiences a range of emotions

When a Cancer gets pissed off, she first expresses it by sulking, then (if no one has caught on) she moves on to passive-aggressiveness, and then withdrawal into her shell. Warning: once she’s in protective shell mode, don’t decide what the best plan of action is to ignore her, for this is when you should express your love and be sweet to them.

If the Cancer is still not getting what they need, their silent fury will morph into crying, and if she’s still unsatisfied that anyone is taking her feelings seriously, she’ll throw down. Every pent-up emotion and unresolved feeling of anger from the past will be unleashed.

When Leo gets angry, they go beyond anger and end up storming with rage; they roar, and the louder and more intense their shouting is, the better they feel. Their go-to is offensive language, and they have a tendency to think only of their emotions when they’re angry, not what their outburst is doing to anybody else. While they might forgive you for doing something that angered them, they’re not very likely to apologize for their behavior because they’re too proud.

Stews in their feelings

Virgos aren’t especially comfortable with expressing their anger, so they hold it in until they blow up at something insignificant. The suppressed anger of Virgos often causes digestive and health issues. Virgos feel very misunderstood, and it can be confusing and awkward for everyone when a Virgo’s anger finally comes out.

It usually isn’t about the supposed immediate cause, but something that happened in the distant past. Virgo, if you can take a moment from crying and slamming doors, I think you’d see that no one is out to get you and your opinions have validity.

Is there anything a Libra hates more than confrontation? Not much. Libras don’t like to show their anger since they think it’s not a very attractive emotion, and it doesn’t go very well with their charming and attractive persona. While Libras try to be above anger, sometimes they can’t talk themselves out of it and will lose it.

But when they do, they believe that whatever way they expressed was the best way possible. Libras have a way of justifying everything even when it’s a meltdown.

Scorpios aren’t easily angered, but when they are — do whatever you can to get out of their line of fire. Their stink-eye will send shivers down your spine, and the brutal and sarcastic things they say when angry are brutal. They aren’t a sign that forgives and forgets, and they can never just let it go when angered. Beware of the furious Scorpio, because the emotional destruction they wreak isn’t pretty.

Sagittarians are ruled by fire, so it makes sense that they can flame-out quickly. They use their words when angry, but that doesn’t make it any less painful. If you upset them, it’s not unlike them to unfriend you immediately — both in social media and real life. The best way of dealing with a Sagittarian is to side-track them, as they have a tendency to digress so far that they forget why they were so incensed in the first place.

There will be days when you have to rummage through the heaps of negativity in your life just to find that nugget of positivity. Make it happen and stay positive. What is a good reason you should stay positive based on your zodiac sign?
Read more
wpDiscuz
6
0
Would love your thoughts, please comment.x
()
x
| Reply