How To Make A Better First Impression 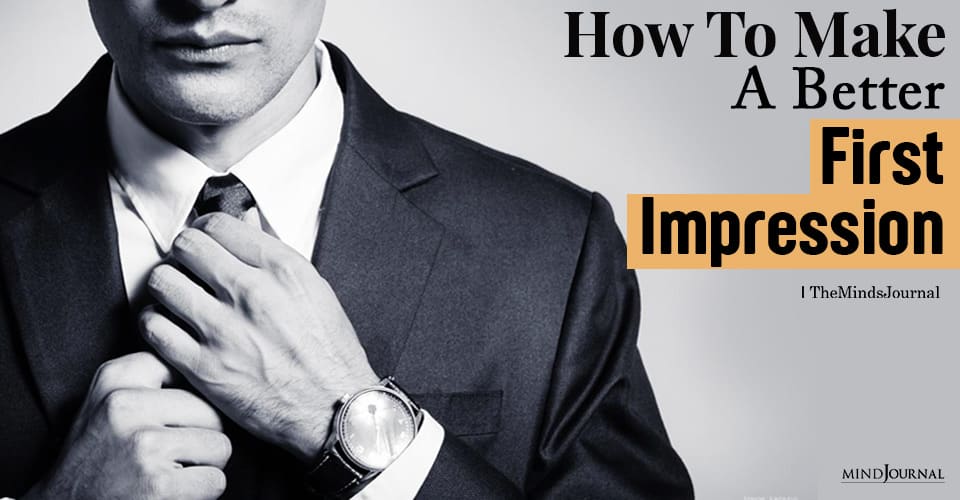 You’ve heard the old saying that you don’t get a second chance to make a first impression, so you know first impressions are important and durable. You may have heard that people make up their minds about each other within 30 seconds of meeting or on some other equally flimsy basis.

So you know that first impressions are formed quickly

What you may not realize is that those durable first impressions are formed even more rapidly than we thought, according to the research. One study found that people develop widely-shared, widely similar impressions of you in less than a second.

That’s roughly the time it takes to say “hello.” By the time the second syllable is out of your mouth, everyone in the room has settled on what sort of person you are, they agree on the assessment, and it’s a fairly broad one, like “trustworthy,” or “confident,” or “aggressive,” or “dominant,” or “warm.”

That’s amazing—and it suggests that it’s not your witty repartee or your insights into the current political situation that are helping to form this opinion. It’s your non-verbal signals and your tone of voice.

This study, in fact, focused on tone of voice, and found that widespread agreement on 64 people recorded saying “hello.” In fact, out of 320 participants, apparently just about everyone agreed on one male “hello” in particular. He was rated overwhelmingly untrustworthy.

We’d all give a good deal not to have that voice, right?

So what were the characteristics of that voice?

Here, sadly, it all gets a little more complicated. But apparently, if your voice is rising at the end, like, “Hello?” then you’re deemed less trustworthy. Especially if you’re a woman. If your voice is too growly, if you’re a male, then you rate lower on the trustworthy scale too. So don’t channel your inner Harrison Ford if you’re trying to connect with people at that level. Instead, you might think Tom Cruise, whose voice is a little higher.

But what’s particularly interesting is that it’s not just trustworthiness that people agreed on—the participants essentially agreed on all the characteristics.

We form remarkably consistent impressions of people with extraordinary speed.

What can you do about it?

Here’s a little trick. Just before you say hello, take a quick, deep breath. From the belly.

That will increase the resonance of your voice, its musicality, which will help your rating on a number of levels and for a number of traits including trust, confidence, warmth, and dominance.

Avoid the trap of saying hello with a rising pitch at the end, as if it were a question. That will undercut your trust and confidence ratings. And while you’re at it, if you’re willing to do the work, avoid two other traps that are particularly common these days: the vocal growl, what some people call “vocal fry,” and the vocal swallow, where the sound of your voice comes from the back of the throat.

Read What Do Your Eyes Reveal About Your Personality: QUIZ

I don’t have the scope in this post to go into all the reasons why those last two traps are so destructive to your voice and the impression you make, but the short version is that you’ll lose authority and leadership qualities while at the same time damaging your vocal cords (in the long run).

I hope that’s reason enough. Breathe, say hello, and do so on a rising-then-falling pitch, but not a vanishing volume, and not from the back of the throat. And you’re good to go.

Is that worth the effort?

How important is a first impression?