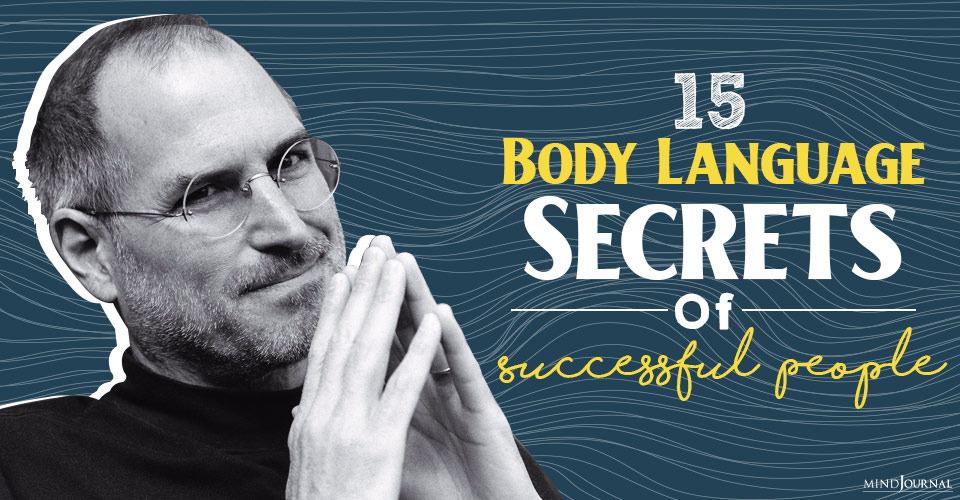 Our bodies have a language of their own, and their words aren’t always kind. Your body language has likely become an integral part of who you are, to the point where you might not even think about it. If that’s the case, it’s time to learn body language secrets, because you could be sabotaging your career.

Your body can speak louder than your words without actually saying anything at all. And the highly successful people know exactly how to communicate with their body to make a statement. Expressing nonverbal signals effectively shows high levels of emotional intelligence. Hence, you need to be careful about what you speak through your body language.

TalentSmart has tested more than a million people and found that the upper echelons of top performance are filled with people who are high in emotional intelligence (90% of top performers, to be exact). These people know the power that unspoken signals have in communication and they monitor their own body language accordingly.

What follows are the 15 most common body language blunders that people make, and emotionally intelligent people are careful to avoid.

It communicates that you’re bored and have no desire to be where you are. You would never tell your boss, “I don’t understand why I have to listen to you,” but if you slouch, you don’t have to—your body says it for you, loud and clear.

The brain is hardwired to equate power with the amount of space people take up. Standing up straight with your shoulders back is a power position. It maximizes the amount of space you fill. Slouching, on the other hand, is the result of collapsing your form—it takes up less space and projects less power.

Maintaining good posture commands respect and promotes engagement from both ends of the conversation.

2. Exaggerated gestures can imply that you’re stretching the truth.

Aim for small, controlled gestures to indicate leadership and confidence, and open gestures—like spreading your arms apart or showing the palms of your hands—to communicate that you have nothing to hide.

3. Watching the clock while talking to someone.

Is a clear sign of disrespect, impatience, and inflated ego. It sends the message that you have better things to do than talk to the person you’re with and what you’re anxious to leave them.

4. Turning yourself away from others, or not leaning into your conversation.

It portrays that you are unengaged, uninterested, uncomfortable, and perhaps even distrustful of the person speaking.

Try leaning in towards the person who is speaking and tilt your head slightly as you listen to them speak. This shows the person speaking that they have your complete focus and attention.

They suggest you’re not open to what the other person is saying. Even if you’re smiling or engaged in a pleasant conversation, the other person may get a nagging sense that you’re shutting him or her out.

Even if folding your arms feels comfortable, resist the urge to do so if you want people to see you as open-minded and interested in what they have to say.

Related: People Who Enjoy Being Alone Are More Likely To Be Successful (According to Science)

6. Inconsistency between your words and your facial expression.

It causes people to sense that something isn’t right and they begin to suspect that you’re trying to deceive them, even if they don’t know exactly why or how.

For example, a nervous smile while rejecting an offer during a negotiation won’t help you get what you want; it will just make the other person feel uneasy about working with you because they’ll assume that you’re up to something.

People may perceive your heavy nods as an attempt to show you agree with or understand something that you actually don’t.

8. Fidgeting with or fixing your hair.

Signals that you’re anxious, over-energized, self-conscious, and distracted. People will perceive you as overly concerned with your physical appearance and not concerned enough with your career.

And that arouses suspicion. Lack of eye contact can also indicate a lack of confidence and interest, which you never want to communicate in a business setting.

Looking down as you talk makes it seem like you lack confidence or are self-conscious, causing your words to lose their effect. It’s especially important to keep your eyes level if you’re making complicated or important points.

Sustained eye contact, on the other hand, communicates confidence, leadership, strength, and intelligence. While it is possible to be engaged without direct, constant eye contact, complete negligence will clearly have negative effects on your professional relationships.

Related: 10 Body Language Cues That Can Instantly Give You Away

10. Eye contact that’s too intense may be perceived as aggressive, or an attempt to dominate.

On average, Americans hold eye contact for seven to ten seconds, longer when we’re listening than when we’re talking. The way we break contact sends a message, too. Glancing down communicates submission while looking to the side-projects confidence.

11. Rolling your eyes is a fail-proof way to communicate a lack of respect.

Fortunately, while it may be a habit, it’s voluntary. You can control it, and it’s worth the effort.

12. Scowling or having a generally unhappy expression .

It sends the message that you’re upset by those around you, even if they have nothing to do with your mood. Scowls turn people away, as they feel judged.

Smiling, however, suggests that you’re open, trustworthy, confident, and friendly. MRI studies have shown that the human brain responds favorably to a person who’s smiling, and this leaves a lasting positive impression. This is one of the body language secrets that will help you win people’s hearts easily.

13. Weak handshakes signal that you lack authority and confidence.

While a handshake that is too strong could be perceived as an aggressive attempt at domination, which is just as bad. Adapt your handshake to each person and situation, but make sure it’s always firm.

Can signal that you’re not open to other people’s points. It can also make you look argumentative and defensive, which will make people nervous about interacting with you.

Related: Why Successful People Are Choosing to Wear the Same Thing Every Day

If you stand too close to someone (nearer than one and a half feet), it signals that you have no respect for or understanding of personal space. This will make people very uncomfortable when they’re around you. Keep these body language secrets in mind, the next time you interact with people in known and unknown settings.

Avoiding these body language blunders will help you form stronger relationships, both professionally and personally.

Are there any other body language secrets I should add to this list? Please share your thoughts in the comments below, as I learn just as much from you as you do from me.