How To Find And Date An Exceptionally High-Quality Partner 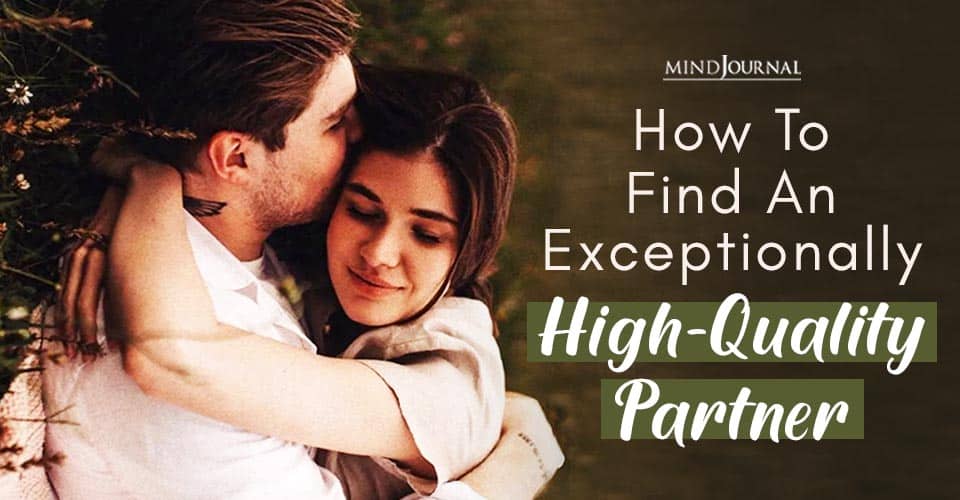 When it comes to romantic relationships, everyone wants to be with a high-quality partner.

Looking to find and date a high-quality partner?

I recently wrote a piece over on Elephant Journal called “Marry A Man Who Knows How To Love Hard.”

I described a man who is there for all of the inevitable what-ifs of life… who lovingly listens to how his partner’s day went… and who understands that love is shown through the little things.

From my vantage point, nothing outlandishly extraordinary… and yet, a lot of commenters weighed in on the post with consistently surprising reactions.

I’m going to switch to a more gender-neutral stance for the rest of the article since the following advice applies equally to both men and women.

On to the good stuff…

Now, there is no such thing as a universally high-quality partner because every person on the planet has a different definition of what they find uniquely attractive in their romantic partners.

So for simplicities sake, I’m going to define a high-quality partner as someone who has a high degree of success/efficacy/awesomeness in their physical, financial, emotional, and spiritual realms.

A high-quality partner is someone who has a high degree of success and aptitude in all of the major areas of life that most people believe to be universally appealing. They’re kind, generous, honest, considerate, funny, smart, and exceptionally loving. These are the kinds of people I’m talking about.

By contrast, a person who has a lot of money but is awful to be around because they’re negative, argumentative, and is quick to judge and shame you would not qualify as a high-quality partner. Excelling in one of these areas does not overcompensate for a complete lack of several others. They have to be well-rounded-ly fantastic.

A high-quality partner is someone who the vast majority of a randomly selected sample of a population would all deem as “a catch.”

So the obvious place to start is with the first question…

a) “Do these kinds of people even exist?”

Let me say, without a shred of doubt or hesitation, that YES, these people absolutely exist.

Not only do they exist, I actually wrote many lines of the aforementioned article based on real men that I know who love in exactly the way that I describe.

These men are not fictitious. They are people who I see, on a weekly basis, loving their girlfriend, wives, and partners in precisely the way that I describe in the article that raised so many skeptical eyebrows.

Not only do I have these kinds of men as friends and colleagues, but these high-quality men also make up the vast majority of the client base of my private coaching services.

It’s not uncommon for the people that I work with (male and female) to be self-employed and financially successful, in exceptional physical health, and in the top 5% of the most kind-hearted, generous, and loving people you’ve ever met.

Not only that, but they also live their lives with an admirable level of intentionality… i.e. if a problem comes up in their relationship/business/with their health, they have the overarching mindset that it won’t stay a problem for long. They’ll do whatever it takes to work their way through the block and get back to a peak state of being (in whatever way that means for them).

Are these people perfect? Are they flawless human beings? No, of course not. There’s no such thing as perfection when it comes to people. But they are ridiculously high functioning, amazing, well-rounded people that the vast majority of people would feel blessed to be in a relationship with.

So it begs the question… if I’m so confident that these people exist (and believe me, they do – I’m not just hallucinating hundreds of amazing people)… why would the majority of people doubt their existence so passionately?

I could deep dive into this piece of the answer for 3-4,000 words by itself… but the main reason/short answer is that it’s easier to discredit the existence of something than to put in the necessary work in order to achieve that difficult task. Speaking of putting in the necessary work… on to the second question!

(CAUTION: hard – but necessary – work ahead!)