How The Fear Of Being Single Can Affect You 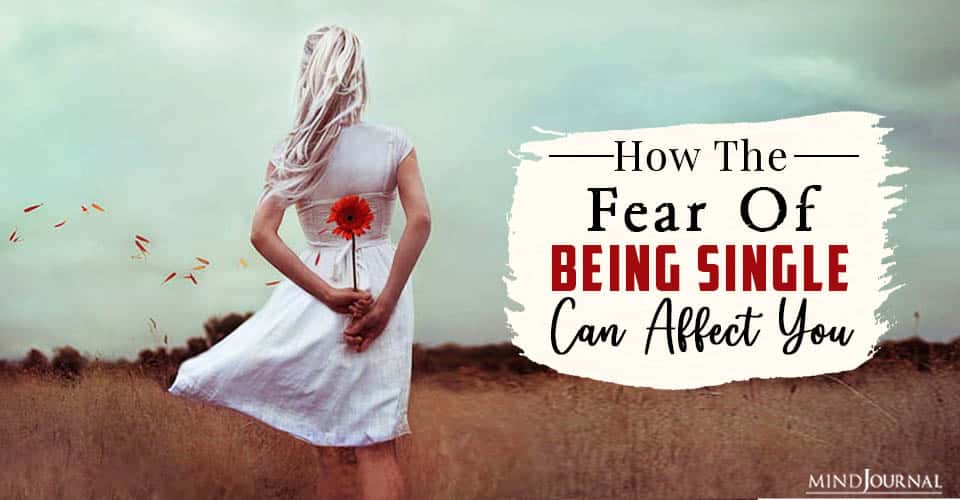 Some people hold the belief that if a person is not in a relationship, he/she must be lonely and miserable. As a result of this fear-inducing scenario, people may rush into relationships that are not the best fit and do not bring them joy.

There is also a body of research that focuses on singlism, a term that describes an anti-single sentiment. Singlism may result in “single adults in contemporary American society [being] targets of stereotyping, prejudice, and discrimination…” (DePaulo & Morris, 2005, p. 57). Therefore, not only do people worry about being single, but those who are single are also judged for it.

Research has shown that people will settle for less in a relationship for fear of being single (Spielmann, MacDonald, Maxwell, Joel, Peragine, Muise, & Impett, 2013). In Spielmann et al.’s study (2013), they defined the fear of being single as “…entailing concern, anxiety, or distress regarding the current or prospective experience of being without a romantic partner” (p. 1049).

This distress can be experienced by both those who are not in relationships and those who are currently in one, but worry about their stability or question their longevity. While most research has focused on this anxiety in women, the authors note that both men and women may experience discomfort when it comes to singledom, because both sexes have an intrinsic need to find and maintain intimate relationships (Spielmann et al., 2013).

Related: Understanding The Fear Of Abandonment And Object Constancy

The researchers conducted a series of studies, through which they developed the Fear of Being Single Scale. Overall, they found that individuals with stronger fears were more likely to lower their standards, both in their current relationships and when selecting new mates. In addition, higher scores on their scale “…predicted greater dependence in less satisfying relationships” (Spielmann et al., 2013, p. 1068).

The more fear a person had, the less likely they would be to end a relationship that they were in, even when they were not satisfied. Being that people with a fear of singledom settle for less, it may further perpetuate the idea that being single leads to unhappiness.

People who fear being alone may stay in unfulfilling relationships or may be quick to rush into relationships that are not ideal. In essence, people may focus more on their relationship status than the relationship itself, which is very problematic.

It is important to be cognizant of any anxiety you have surrounding being single or the possibility of ending a relationship. You must also understand that pressure to be in a relationship may have negative consequences, such as settling for less (Spielman et al., 2013).

Related: 4 Mantras To Heal Your Fear Of Commitment

Being single is not necessarily negative. In fact, there are many benefits to being single. Many singles experience more autonomy and personal growth than those who are married (Marks & Lambert, 1998). In addition, being single enables a person to spend more time maintaining close connections with others.

Research has shown that singles maintain greater contact with their friends, neighbours, siblings, and parents than their married counterparts (Sarkisian & Gerstel, 2016). Therefore, those who are single benefit from fulfilling relationships with themselves and others.

Remember that there is nothing wrong with being single. Do not compare yourself to others in relationships. Instead, value the meaningful relationships that you have in your life.

Dr. Marisa Cohen is a relationship scientist, relationship coach, and teaches psychology at the college level. She is also the Head of Couple Relationships for Paired, an app designed to enhance communication between partners and help them learn more about their relationship. Marisa is the author of From First Kiss to Forever: A Scientific Approach to Love, a book that relates relationship science to everyday experiences and real relationship issues confronted by couples. In addition, she is the co-founder of the Self-Awareness and Bonding Lab, a lab that examines love from a scientific perspective.View Author posts