How To Deal With Dismissive And Arrogant People 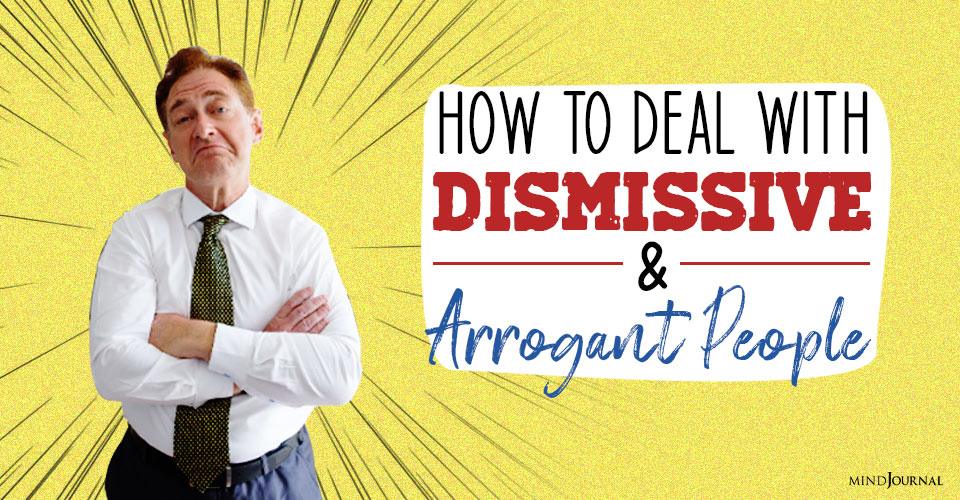 “Judgemental, egotistical, and arrogant people appear to think they are better than you. Truth is, they are attempting to convince themselves that they are.” – Unknown

Do you get emotionally triggered when you’re with someone who acts as if they know what is right and you must be stupid to think the way you do? You might try to fight back, proving they are wrong, but nothing gets resolved. Then you simmer about the interaction for hours.

Maybe you just shut down. Disengaging can end a conversation, but the person then assumes you agree they are right. Or you sense they feel they have won. If you have to live or work with them, they continue to spout their views when you are together, increasing your tension and stress.

You can use techniques in these situations to relieve the competitive energy and feel better about yourself at the end of the interaction.

Related: 10 Strategies To Help You Deal With The Difficult People In Your Life

First, it might be helpful to know there is a difference between being confident and arrogant.

Confident people know their value and abilities. They don’t need to put others down to feel good about themselves. They may overly judge themselves, trying to be the best they can, but they don’t measure their worth against the performance of others.

Arrogance is often a cover for the lack of confidence. Whereas confidence comes from self-measurement (how am I doing compared to last time), arrogance stems from other-measurement (how am I doing compared to others). They fear being seen as incompetent. They look at others as less than or better than and must put other people down who challenge their ideas. Every conversation is a test or opportunity to be smart and right.

Arrogant people need to project superiority to be deemed credible or worthwhile.*

If you don’t support their ideas or actions, arrogant people react competitively. Their responses will be laced with condescension, or they will dismiss you completely by not listening and averting their attention elsewhere as a power play.

Here are five speaking habits that indicate arrogance prompted by a lack of confidence.

Even if arrogance is a clear cover for low self-esteem, they drain the joy from conversations.

Instead of becoming competitive with arrogant people, can you model what confidence looks like? Although humans naturally tend to compare themselves to others, confident people don’t get caught up in the “less than-better than” loop of judgment.

If you choose to model confidence when interacting with the arrogant person, practice responding these 5 ways:

1. No matter how much you are boiling inside, listen before speaking.

Summarize what they are saying with as little emotion as you can. They need to feel heard; you might diffuse their competitive energy. Then you can ask if they would be willing to hear your perspective.

Related: How to Stay Positive around Negative People

Dr. Reynolds is a pioneer in the coaching profession. She was one of the first members and the 5th global president of the International Coach Federation. She is also a past president of the Association for Coach Training Organizations. She is the Training Director for the Healthcare Coaching Institute in North Carolina and is also on faculty for coaching schools in Russia, China, the Philippines, and India. She is recognized by the Global Gurus as the #4 coach in the world. She has trained and coached leaders in 43 countries and has presented at the Harvard Kennedy School, Cornell University, Smith College, Almaty Management University in Kazakhstan, and The National Research University in Moscow. She became fascinated with emotional intelligence after reading Daniel Goleman’s book in 1996 and designed a training program that integrates emotional choice with leadership presence, communications effectiveness, and life satisfaction. She has since taught her programs for many agencies of the National Institutes of Health, multi-national corporations around the world, and for coaching schools in Europe and Asia.View Author posts