Is It Still Gaslighting If My Partner Has Asperger’s? 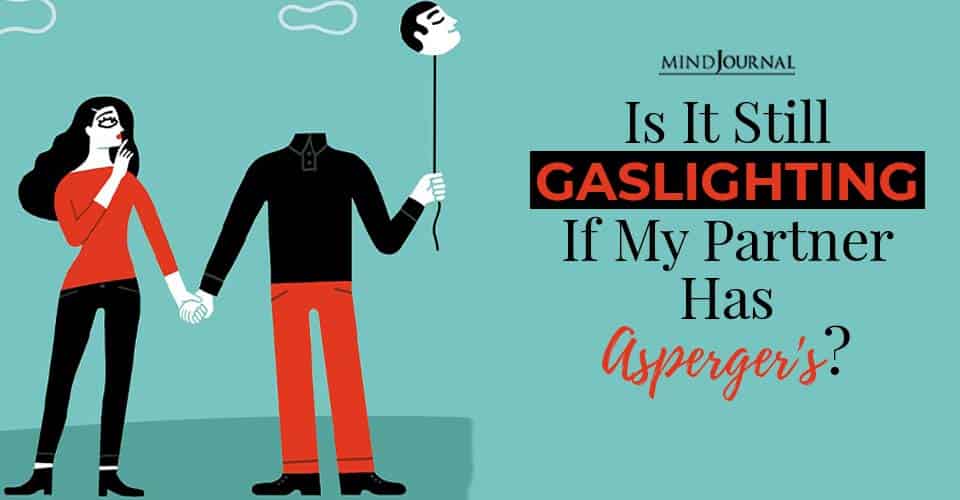 In this model, time after time, incident after incident, she is cajoled into questioning what her own eyes, ears, and heart are telling her. Finally, she gives up. She begins to believe the mirror her partner holds up to her reflects an accurate representation of who she is.

In order to believe that, she has been forced to discount any impulse of her own that contradicts such an image. She collapses into self-doubt. His manipulation has succeeded. Does this make him right? His smugness suggests that he believes so. He feels clever. He has won.

What would motivate someone to treat another person this way?

Such individuals leave a trail of emotional wreckage in the lives of others. Shelves full of books and countless hours of therapy are devoted to helping those victimized by such manipulators.

LOOKING BEYOND THE BEHAVIOR: SELF-PROTECTION

Behind the behavior of the personality disordered, there is an unconscious drive to protect that which feels threatened, which is usually the person’s self-worth. In twisted logic, anything that might compromise such fragile emotional integrity must be extinguished at all costs before it can extinguish the very life of the manipulator. This may be felt as desperation.

As a result, manipulation can be rationalized. It may not be viewed as a choice but rather as a necessity for survival. Incidentally, there is no respect for someone who can be manipulated, which makes further mistreatment easier and may even be viewed as what the person deserves.

But Gaslighting is not the motivation of someone with autism or Asperger’s.

THE TRAGIC DANCE OF THE NEURODIVERSE COUPLE

The jewels an autistic person guards could best be described as personal integration and a sense of security in who he is. Threats may come from feeling overwhelmed emotionally in the face of what seems like unmanageable ambiguity and uncertainty, which often lead to untenably high anxiety.

Reducing that anxiety, consciously or not, is the most likely driver for behavior that appears to be gaslighting in someone with Asperger’s.

Often, this person is oblivious to the harmful effects of his behavior and doubts the validity of someone’s observation that it might be gaslighting. The fact is that I have never met an autistic person whose conscious intent is to manipulate his partner.

But the key phrase is “conscious intent.” Because even though a person with Asperger’s may not mean to manipulate (gaslight) his partner, her actual experience is the same as it would be if intent were there.

Read ADHD Is A Fictitious Disease: A Shocking Deathbed Confession

The autistic person can learn in counselling that his behaviour has the effect of invalidating his partner’s emotional life. He can come to understand that even though he does not intend to inflict such pain, the effect is real.

Her dismayed and perhaps argumentative behaviour is how a neurotypical person might justifiably respond to what feels like manipulative behaviour from someone else. She is not trying to criticize him. She is trying to express her pain.

As a licensed psychotherapist and as a coach, I work with neurodiverse couples - autistic + neurotypical - as well as individual partners. I am also a high intelligence specialist. I consult with companies to help guide their decisions regarding professional autistic employees. Because my coaching work is international, we rely mostly on English, but we also speak Italian, German, or French, if necessary, to augment clarity in communication when one of those languages is the client's first language.View Author posts