ADHD Is A Fictitious Disease: A Shocking Deathbed Confession 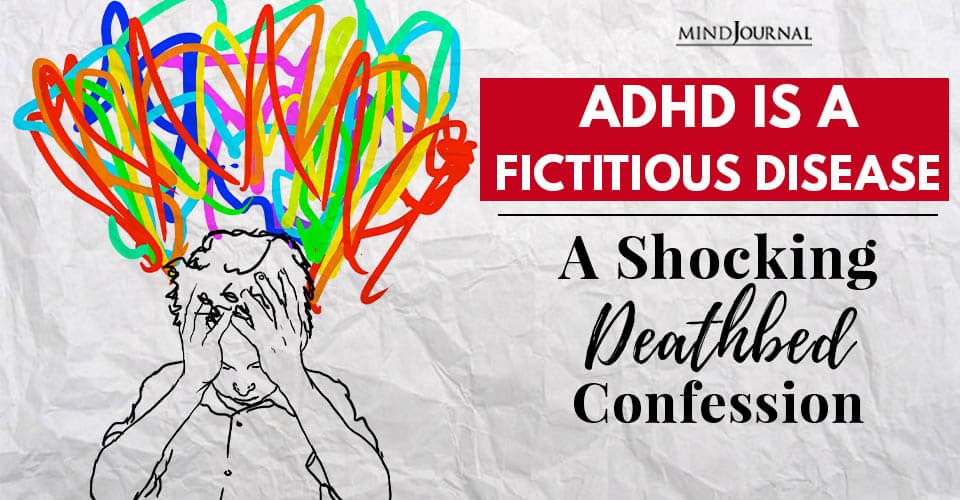 Are you worried about the future of your child suffering from ADHD (Attention Deficit Hyperactivity Disorder)? Then in the first place, you should know that “ADHD is a prime example of a fictitious disease.”

Well, that was the startling deathbed confession made by Dr. Leon Eisenberg, the man who discovered ADHD.

In his last interview, that he gave before his death at the age of 87, he made some shocking revelations about ADHD, which made people question whether ADHD is a legitimate disease.

A disease is a health condition that deviates from our understanding of what constitutes “normal” human health. In short diseases are social constructs. They are something that damages a person’s health and in some cases society. For example, diabetes, schizophrenia, cancer and so on.

Similarly, ADHD too deviates from the norm, but most people don’t have ADHD behaviours. While treatment for diabetes or other chronic diseases assures a healthy life in the long term, the treatment for ADHD is questionable.

Medical conditions like diabetes, liver cirrhosis have a discrete cluster of symptoms and consistent from case to case and can cause the impairment to the individual concerned. ADHD also have hallmark symptoms such as distractibility, procrastination, absentmindedness, short concentration span, and poor impulse control. And the typical consequences are poor academic underachievement, low self-esteem, social difficulties are typical consequences.

Read The Impact Of ADHD On A Child’s Schooling

Then, why according to Dr. Leon Eisenberg ADHD is a fictitious disease?

Initially, some  doctors considered Dr. Eisenberg’s statement as an “exaggeration,” but later many confirmed that ADHD is often “over diagnosed” by the use of “fuzzy diagnostic practices.”

Dr Eisenberg intensely researched the biological basis of the child behaviour and made important contributions in the field of child psychiatry in the 1950s and 60s. He received “Ruane Prize for Child and Adolescent Psychiatry Research and his work in research, teaching and social policy.

He was interested in the biological basis of child behaviour, and in developing evidence-based treatments. He conducted several pharmacological trials, developed theories of autism and social medicine according to Psychiatric News.

Dr Eisenberg’s interview, published in German in Der Spiegel magazine in 2012, showed that he was concerned about the alarming rise in ADHD diagnosis and use of stimulant medications. He was worried about the overdiagnosis of ADHD because there are many other childhood conditions and environmental stressors that can masquerade as ADHD.

“Let’s go back 50 years. We have a 7-year-old child who is bored in school and disrupts classes. Back then, he was called lazy. Today, he is said to suffer from ADHD (Attention Deficit Hyperactivity Disorder). . . . Every child who’s not doing well in school is sent to see a pediatrician, and the pediatrician says: “It’s ADHD; here’s Ritalin.” In fact, 90 percent of these 5.4 million kids don’t have abnormal dopamine metabolism. The problem is, if a drug is available to doctors, they’ll make the corresponding diagnosis.)

The medical industry is actually depersonalizing and disconnecting children from healthy normal upbringing. What children need is tender love and care, but parents are subjecting them to drugs. In the United States, 1 out of 10 boys among 10-year-olds takes medication for ADHD every day.  But, in the 1960s, mental disorders were virtually unknown among children.

The study titled, “Financial Ties between DSM-IV Panel Members and the Pharmaceutical Industry” highlighted that the 56 per cent of DSM panel members had one or more financial ties with companies in the pharmaceutical industry. DSM panel members were also closely associated with professionals responsible for developing and modifying the diagnostic criteria for mental illness. Strong relationships were found in the diagnostic areas, where drugs are the first line of treatment for mental disorders. More the drugs sold, more the profits and richer they become.

You read it right!

The assistant director of the Pediatric Psychopharmacology Unit at Massachusetts General Hospital and associate professor of psychiatry at Harvard Medical School received “$1 million in earnings from drug companies between 2000 and 2007.”

Marc-André Gagnon and Joel Lexchin, a long-time researcher of pharmaceutical promotion, performed a study. As per the results, the U.S Pharmaceutical industry spends twice the amount of money in promoting drugs (24.4 per cent of the sales dollar) than on researching (13.4 per cent) the safety levels of drugs in 2004.

The ADHD drugs have dangerous side effects and parents who lack awareness about the corrupt alliance of the psychiatric-pharmaceutical Industry, keep administering the prescription medications to their children.

Dr. Edward C. Hamlyn, a founding member of the Royal College of General Practitioners, in 1998 stated, “ADHD is fraud intended to justify starting children on a life of drug addiction.”

Why psychiatrists are not much concerned about genetic predisposition to ADHD? Why this aspect is completely overrated? Why don’t child psychiatrists thoroughly check out for psychosocial reasons that can lead to behavioral problems?

Questions like – Are there any disputes in family? can lead to intense discussions and it may consume a lot of time decoding why a child don’t want to attend school or acting impulsive. Prescribing a pill is lot easy, saves time and generates more money.

That is why Dr. Leon Eisenberg calls ADHD a fictitious disease.

What are your views on ADHD scam and mass drugging of school children?