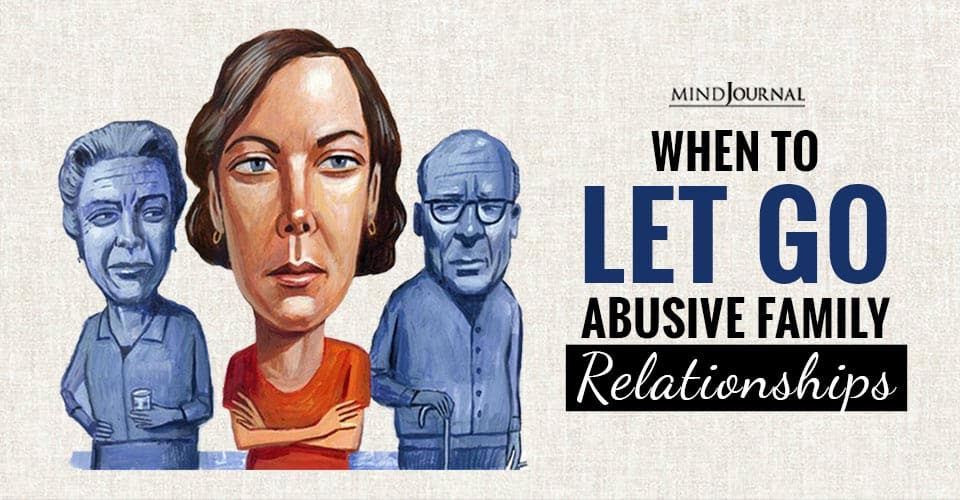 It is often challenging to make the decision to let go of abusive family relationships. This article is about when to make that decision.

Ruth consulted with me because she was confused about what to do regarding her mother, her brother, and her son.

From the time Ruth was born, she never felt like she belonged in her family. Her mother ignored Ruth, obviously preferring her brother, and consistently allowed her brother to beat up Ruth. Ruth had some connection with her father, but he was a weak man and never stood up for her or protected her.

Ruth was a loving child and tried in any way she could to please her mother and brother, to no avail. She could never understand why her family didn’t like her.

As an adult, she married an emotionally unavailable man, a man very much like her mother. As with her mother and brother, she tried in many ways to get his love and never succeeded. Her son, Dylan, was eight years old when they divorced.

Dylan always seemed to prefer his father, and finally went to live with his father when he was sixteen. Once again, Ruth was completely in the dark regarding why her son didn’t like her. She had been such a devoted mother, so why was he rejecting her?

Ruth finally married again, this time to a loving man, and had another child. Her current family was totally different from her previous family and from her family of origin.

However, she still hoped to have a relationship with her mother. She would send her mother birthday and Christmas cards, but rarely heard from her.

Related: Why It’s Okay To Cut Toxic Family Members Out of Your Life

Ruth was a shining light of love. Her eyes, her smile, her gestures all radiated love and compassion. Her deeply gentle and peaceful nature was evident at first glance.

“Because you are a giver and they are takers,” I told her. ‘Givers care about others, while takers just want to take from others.

You can never give enough to a taker to receive any caring back, because they don’t like themselves. They reject themselves and try to get others to give to them.

Because they have emotionally abandoned themselves, they are angry at others for not giving enough to them. Your mother and brother were united in their taking from you, as were your first husband and son.

They look at you and see a fountain of love coming from you and they want it, but they are incapable of receiving it. Your light contrasts with their darkness and they hate you for it.”

“Nothing, other than not be around them. They will suck the life out of you if you allow them to spend time with you. I know you care about them, but they are incapable of caring about themselves or you, so you have to let them go. It is not in your highest good to be with people who are incapable of valuing you – who just want to take from you.”

Related: 10 Signs You Have A Toxic Mother-In-Law

They feel inadequate in the face of your open heart and their closed hearts, and they take their self-judgment out on you. There is nothing you can to do to help them open their hearts. Only they can do that. It is unlikely your mother or brother will ever open their hearts, but perhaps your son will in time. He will come to you if he does.”

“But I have such a great life now. Isn’t it selfish of me to just let them go abusive family?”

“No, it is self-responsible. It is not loving to yourself to be around people who treat you badly.”

Ruth understood. She felt sad but relieved. She finally saw that all she could do was pray for them to open their hearts.

Are you ready to let go abusive family ties?

Children who experience childhood rejection trauma and dysfunction often struggle to learn boundaries and behaviors that seem easy for others.

But before we get into it, let’s learn more about childhood rejection issues.

What Is Childhood Rejection Trauma?

Rejection is something that every individual experiences at some point in